The preliminary portion of every UFC event usually comes and goes with little to no fanfare. As an avowed lover of all things undercard, let us put an end to that trend with a top-to-bottom breakdown of the UFC Fight Night 22 dark matches. Insert Al Pacino-style “Hoo-ah” here.

Talent has never been an issue for Yves Edwards. Ask most anyone who has trained with him and they will tell you that if talent were the end-all be-all of MMA, Edwards would be a perennial top five lightweight. Of course, talent accounts for only part of the equation, and Edwards’ mental hiccups are well-documented.

However, the fighter whose growth was stunted by losing winnable fights was nowhere to be found at the Frank Erwin Center in Austin, Texas. Time and time again, John Gunderson went for takedowns and tried to hold his own on the feet. He accomplished neither. It was the kind of complete, three-dimensional performance for which Edwards’ fans pray every time he enters the cage.

Six years ago, Edwards was the uncrowned champion of the UFC’s lightweight division. Winning the title he once held unofficially may be unlikely at best, but he still has the game to keep many of his contemporaries from doing the same.

The Octagon will never be confused as the most welcoming place for a 22-year-old who has never fought in front of a UFC-sized crowd. Anthony Waldburger took to the experience like a savvy veteran in taking a resounding unanimous decision win over the previously undefeated David Mitchell.

It was not always pretty, but Waldburger put in 15 minutes of grown man work against an opponent many expected to beat him. What the UFC has planned for him remains unclear, but he’s yet another welterweight prospect worth keeping an eye on. The focus on the division has shifted towards young bucks like Rick Story and John Hathaway, which means the humbly nicknamed “TJ” has plenty of time to work out the kinks against the division’s lesser competitors.

For every blue-chipper that develops as hoped, there exists an anonymous regional name that takes expectations and punts them like Ray Guy. Lately, the UFC has been finding more of the latter than the former. Time will tell into which category Waldburger falls.

Not Feeling So Froggy 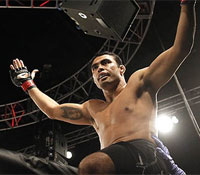 File Photo: Sherdog.com
Natal disappointed in his debut.
Rafael “Sapo” Natal was supposed pass his first test against Rich Attonito and move on to bigger and better things in the middleweight division. The X-factor was Natal’s notorious issues with motivation. After he ate a massive right from Attonito late in the first round, that variable changed the whole fight.

Unlike Edwards -- who won his bout by focusing his talent for every second he was in the cage -- Natal disappointed in his UFC debut because he was not ready to maximize his ability. Much respect to Attonito for stepping in as an underdog and earning a UFC spot that many observers, myself included, previously felt was undeserved.

Ditch the Punch Magnet: Jared Hamman’s chin almost certainly has some sort of device in it that attracts punches. His talents are undeniable, but getting tuned up by the likes of Kyle Kingsbury leaves one to wonder if Hamman would not benefit more from some time on the regional circuit than another UFC bout.

A Forrest Falls in the Woods: Almost no one got to see it, but Brian Foster put together another quality effort, this time at the expense of grizzled UFC veteran Forrest Petz. He may never be a serious title contender, but if the UFC plans to keep Foster around, it might as well make sure he gets on television. This man is practically violence incarnate.

Follow Tomas Rios as he attempts to find a quality replica of MF Doom’s mask on Twitter at www.twitter.com/Tomas_Rios.