Mark Hominick is eyeing a UFC title inside the Rogers Centre at UFC 129. | File Photo/Sherdog.com


In 1993, Joe Carter stepped to the plate in the bottom of the ninth inning for the Toronto Blue Jays in Game 6 of the World Series. Eleven-year-old Mark Hominick lived an hour-and-a-half’s drive from the SkyDome, where the game was taking place. Like all of his friends, Hominick was a hockey kid who was soon to become obsessed with martial arts.

No matter the forum and throughout his life, Hominick has been able to recognize a big moment, an opportunity waiting to be seized. So, he was a baseball fan that October night and cheered when Carter ripped an unforgettable home run to clinch the series.

“The Joe Carter home run was definitely an iconic moment for Ontario,” Hominick says in a telephone interview from his home in Thamesford, where he was raised. “[SkyDome] is an iconic building for Ontario, and [UFC 129] is going to be a historic event. To be on the biggest UFC in history, fighting for the inaugural 145 belt, you couldn’t paint a better picture. This is what I’ve worked towards for the last 15 years.”

It may be a short distance from Hominick’s hometown to SkyDome, which today is the Rogers Centre, but the road to the venue is long on significance for the veteran. He will challenge featherweight champion and pound-for-pound ace Jose Aldo in the UFC 129 co-main event on April 30, hoping to extend his lifetime of overachievement and draw the explosive cheers of 55,000 fans under the Rogers Centre’s retractable roof.

It would be Hominick’s “Joe Carter” moment, a chance to captivate his home province and introduce to it a new point of sports pride.

From Hockey to MMA

Hominick was born to a father who sold high-end kitchen and bath products and a mother who worked admitting patients at the hospital where he was born. Thamesford is a community of about 2,800 nestled amidst the Great Lakes.

“Small town; the same guys I grew up with are the same guys I’m buddies with still now,” Hominick says. “It’s one of those towns, you know. There’s one gas station, one Tim Hortons, you name it.” 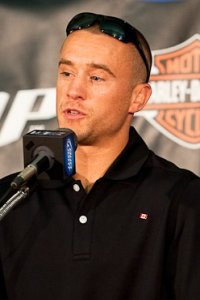 File Photo
Hominick keeps the Canadian flag
close to him.
There is also hockey in Thamesford -- lots of it; in the street, every day after school with friends or on the ice as part of organized league play. A right wing and goal scorer, Hominick was not much of a fighter on the ice, but he was not afraid of getting into corners or taking and administering open ice hits. He remembers freezing the first time an opponent dropped the gloves on him, despite regularly practicing the time-honored invitation to a hockey brawl with a friend on his farmland.

Hominick was never the biggest player on the ice. He was less than 130 pounds in high school; other kids were reaching 185. It was the first hint for Hominick that his size would complicate his quest to be recognized as the best at what he did. The Ultimate Fighting Championship did not host its first fight in his ideal weight class until December 2010. To capitalize on an opportunity, Hominick fought at 155 during his first UFC stint in 2006.

In ninth grade, Hominick’s class visited a local martial arts studio for orientation classes. He signed up under instructor Brad Hudson, a tae kwon do stylist who had also dabbled in Jeet Kune Do and jiu-jitsu.

This was like the stuff Hominick saw on a UFC 3 video he had watched covertly to dodge parental disapproval.

“[Hudson] basically trained everything, so it was a good introduction to the sport,” Hominck says. “It definitely took over my life.”

At 13, Hominick began competing in grappling tournaments. Later, he would take part in Pankration meets, essentially MMA bouts sans strikes to the head. He traveled to Greece for a Pankration tournament, fighting on the same Canadian team as former UFC welterweight champion Carlos Newton -- a teenage idol of Hominick’s -- and opposite American MMA luminaries like Shonie Carter.

After four years with Hudson, Hominick met and began working with noted Canadian striking trainer Shawn Tompkins. It was not until that meeting that Hominick, a renowned striker his entire career, actually began to develop his bent toward kickboxing. He competed in muay Thai, racking up a 25-0 amateur record, and on the traveling kickboxing circuit in the American Midwest.

“We’d do kind of like weekend trips; we’d rent a van and bring a team of eight,” Hominick says. “It would always be Canada versus USA.”

Tompkins remembers when the two first met. Hominick had recently gotten his driver’s license, and the trainer was impressed by his maturity.

“He’s always been way ahead of most of the kids his age, growing up with a maturity,” Tompkins says. “Mark has never been the ordinary guy to walk into the gym. He always sets his expectations very high, and Mark’s not a guy to get involved in something to be second place. It was always a very natural thing for him to be at that level and to maintain that level.”Â

Tompkins shepherded Hominick into amateur mixed martial arts. In that arena, Hominick mostly discarded his leg kicks, which he had used to great effect in kickboxing, but too often set up opponents’ takedowns. He focused on developing his boxing and footwork.

“
It was pretty amazing.
Even before the UFC,
I was fighting at the
Bell Centre.

By 2002, when the perennially boyish-looking Hominick made his professional debut, a solid MMA infrastructure had sprouted in Montreal. The Universal Combat Challenge was putting thousands in arenas, had a television deal and was making stars out of local talent.

Hominick, then 19, got the call to fight as an injury replacement against veteran Richard Nancoo for the Canadian super lightweight title at UCC 10 on June 15, 2002.

“My first pro fight was for the Canadian title. It was in front of 6,000 people. I did a pre-fight interview that was up on the Jumbotron. It was filmed by the sports channel in Quebec,” Hominick remembers. “You were in the big show already. It was pretty amazing. Even before the UFC, I was fighting at the Bell Centre, where the UFC had their first [Canadian] show.”

Hominick beat Nancoo to take the title via third-round TKO. Also debuting and claiming a title that night was Georges St. Pierre, who won his fight via submission. Hominick notes the parallel with UFC 129, where the countrymen will once again fight for titles on the same bill.

“It brings it back to that moment,” Hominick says. “We’re both fighting for the belt.”