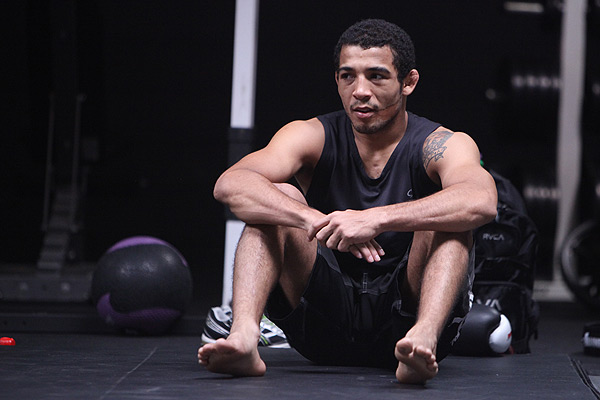 Everyone answers to somebody, so we, the staff at Sherdog.com, have decided to defer to our readers.

“The Doggy Bag” gives you the opportunity to speak about what is on your mind from time to time. Our reporters, columnists, radio hosts and editors will chime in with their answers and thoughts, so keep the emails coming.

It has been an intense week for MMA talking points. Just as soon as Randy Couture shacked up with Bellator and Spike TV, the UFC dropped the bomb that Jose Aldo would defend his featherweight title against No. 1 lightweight contender Anthony Pettis on Aug. 3. Come to think of it, the UFC announced Aldo-Pettis at the same time as Couture's press conference. That must just be a coincidence.

Aldo and Pettis are on everybody's tongues, wondering if the champion is bound for 155 pounds and what the win would mean for his legacy. However, some of you are wondering just exactly how Couture's presence can help Bellator and Spike TV and just what the hell “MMA Rescue” is all about.

Some of you are not done chewing on UFC 156 yet. More principally, the surprising-but-different performances of Alistair Overeem and Demian Maia have peaked your interest. Where do these athletes stand as challengers after Overeem's deflating loss to Antonio Silva and Maia's eye-opening domination of Jon Fitch?

Speaking of contenders, the UFC rolled out its first official rankings last week. To say they were met with criticism would be putting it gently; however, some voices out there think people ought to take an “official” UFC ranking more seriously, boss Dana White included.

Jose Aldo has gone from fighting Mark Hominick and Kenny Florian to facing Frankie Edgar and Anthony Pettis. How can anybody not be excited by this fight? I do have a question, though: if Aldo wins, does beating Edgar and Pettis back-to-back mean he’s a lock to move up to 155? If so, how do you think Aldo would fare fighting at lightweight full-time? -- Kendall from Montana

Brian Knapp, features editor: The fight fan in me loves the Aldo-Pettis matchup. The sports purist in me is somewhat less enthused.

This is the type of fight that moves the needle, that gets the masses talking, that pays the bills at the box office. I get that. However, it also serves to blur the line between sports and entertainment. Walk with me while I play Devil’s advocate here. Pettis has never won a fight at 145 pounds in World Extreme Cagefighting or the Ultimate Fighting Championship. How does that warrant a title shot, against one of the sport’s pound-for-pound greats no less? Has Pettis -- who less than two years ago lost a unanimous decision to Clay Guida -- done enough with spectacular knockouts over Joe Lauzon and Donald Cerrone to leapfrog deserving 145-pound contenders like Ricardo Lamas and Chan Sung Jung? Those are questions worth asking, no matter how one feels about the fight.

Whoever wins the Aldo-Pettis super fight, the UFC is going to be put in a somewhat awkward position. Aldo’s issues with the weight cut at 145 pounds are well-chronicled. If he beats Pettis, a top 5 lightweight on the rise, does it hasten his inevitable move to 155? What kind of vacuum does that leave at featherweight? If Pettis wins, does he set up permanent residence at 145 pounds and defend the title or does he straddle the fence between featherweight and lightweight?

As previously mentioned, I expect Aldo’s move to 155 pounds to happen soon. As crazy as it sounds, I think he will be an even more dynamic force there, with his enhanced speed and improved cardio. In terms of hypothetical matchups at 155 pounds, one would have to favor Aldo against just about anyone, including reigning champion Benson Henderson. Perhaps the UFC sees the bout with Pettis as a potential vehicle for the Brazilian’s transition from featherweight to lightweight.

Despite some of my reservations, I will have Aug. 3 marked on my calendar. Even Lamas and Jung have to admit Aldo-Pettis is must-see.