The mohawk. The mustache. The backpedaling, screaming celebrations.

The head kick. The wall walk. The overhand right.

A fighter’s fighter. A UFC champion. An MMA icon.

There are near endless ways for someone to remember Chuck Liddell. His 12-year career is among MMA’s finest, as Liddell fought and beat a veritable who’s who of the sport’s star-studded light heavyweight division. Along the way, he turned in some of the game’s most indelible memories, whether they were triumphant wins, crushing defeats or classic battles. He became MMA’s first true superstar in North America, his rise inextricable and intimately intertwined with the rapid rise of the UFC and MMA on the whole.

On Dec. 29, “The Iceman” finally called it a career, hanging up his four-ouncers and preparing to settle into a role as Zuffa LLC’s executive vice president of business development. As the 205-pound legend turns over a new leaf to the corporate world, Sherdog.com staff members and contributors weigh in on their most vivid memories, reflections and appraisals of Liddell’s trials, triumphs and importance to MMA.

Jordan Breen: UFC 43, just days after my 16th birthday, was my first live UFC experience. The event was bizarre enough, between the Frank Mir-Wes Sims debacle and Matt Lindland knocking himself out. That was before the epically awful video intro Chuck got courtesy of the late Charles “Mask” Lewis. The video and subsequent Vanilla Ice metal remix left me in shock, a sense that continued as I watched an afterthought underdog Randy Couture dominate “The Iceman.” That night, I wondered if Liddell might settle into a bridesmaid role, a Top 10 fighter who just couldn’t get over the hump. If someone had showed me a vision of the future -- ESPN The Magazine, “Entourage,” “Good Morning Texas” and all the rest -- I’m not sure I would’ve believed it. For me, the adversity Liddell faced en route to becoming MMA’s first crossover superstar made it much sweeter to watch.

Wojek Rysiewski: Chuck had a remarkable role in elevating UFC’s popularity in the U.S and will be undoubtedly remembered as one of the legends of the sport. However, as a European, I always viewed his accomplishments from a Pride-UFC rivalry perspective, with Wanderlei Silva being his ultimate foe. Each of their wins increased my hunger for this dream light heavyweight matchup. Even though the fight finally happened when they were both past their primes, I will never forget the moment they entered the Octagon and Chuck gave the last highlight performance of his career.

Jeff Sherwood: Chuck was a people’s champion for his willingness to fight and be there for the fans. Just look at his early fights. Between fighting in the UFC, a 30-minute bareknuckle brawl with Jose "Pele" Landi-Jons and taking bouts in small promotions like Neutral Grounds, he proved that he just wanted to fight. Money was not the goal then, or ever, for Chuck. I think that’s why the fans fell in love with him. For me, part of it was influenced by what I saw in Friant, Calif., in 2000, before he fought Steve Heath. Watching Liddell run up and down the mountains in the 110-degree heat at the Table Mountain Casino to make weight was impressive enough. The next night, he turned in one of the most brutal head kick knockouts I’ve ever seen; to this day, it’s still one of the worst I’ve witnessed. It was a crazy scene, as Heath's wife tried to get into the cage to make sure her man was alright. Chuck deserves to be called a legend of the sport and deserves all the kickbacks he gets in retirement. 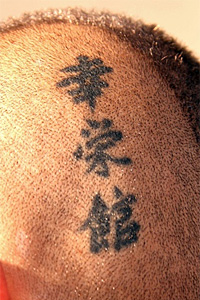 Russell Einhorn/Splash News
Chuck Liddell's famous mohawk.
Chris Nelson: I never had a Mohawk, painted my nails or wheeled around backward with my shirt off, arms splayed. Liddell’s image in his prime was diametrically opposed to my own tastes as a young man. Nonetheless, I can vividly recall watching his second fight against Randy Couture with my younger brother and a bunch of his friends. Their visceral, ecstatic reaction to The Iceman’s win gave me my first true notion of what was to come for MMA and just how crucial Liddell would be to the sport’s explosion. My respect for Liddell grew to such an extent that I found myself saddened when, in recent years, he would make headlines with a speech-slurring talk show appearance or find himself on the receiving end of a brutal knockout. Thank you, Chuck, and enjoy your time behind the desk; you earned it.

Mike Whitman: For me, UFC 52 marked the ultimate performance for The Iceman. In 2005, Liddell’s Mohawked followers made me want to smash things. Though I was in the minority, I was confident that Randy Couture would once again put a fist in Liddell’s face before hoisting him above his head and slamming Liddell through the mat.

As Chuck sidestepped a charging “Captain America,” the action started to slow down in my mind. I could see the inevitable coming. It was perfect -- a laser beam of a right hand that smashed into Couture’s jawline, buckling his knees and causing my own jaw to nearly unhinge. After that fight, I damn sure appreciated his greatness every time he stepped in the cage. What a fighter, and what a career.

Guilherme Pinheiro: Looking back at Chuck’s career inevitably takes me back to my college years, when I was just another law student at University of Sao Paulo. I was just a fan, with no intention of being involved in any way with MMA back then. I still remember awaiting UFC 47 and can still recall the exact moment when one of my buddies called me to go to a party that day. I said yes but quickly remembered that Chuck was fighting that night. Because I was afraid my friends would mock me if I told them the real reason of why I would skip the party, I came up with an excuse so I could stay home and watch the fight. That’s what Chuck Liddell is to me, the kind of fighter that would keep you home on a Saturday night just to watch him fight.

Traci Ratzloff: I remember the awkward feeling when Liddell KO’d Couture, not once but twice: bittersweet because The Natural was taken down, especially with the questionable pinky, but exciting that Liddell was the one to actually KO the All-American hero. Also, I can’t help but recall the first Ortiz fight. The bout was so long in the making that it almost felt like good versus evil. Sorry, Tito. Remember all of Tito’s trash talking that led up to the fight? Both of these athletes will forever be remembered as two of the best characters ever pitted against each other in this sport. Chuck, we will miss the excitement and athleticism you brought to the cage. Few create the sense of anticipation you did.

Tracey Lesetar: Everyone remembers the first MMA fight they watched. More likely, the true MMA fan remembers that feeling in their fingertips when they saw their first really, really good finish -- a spectacular blitzkrieg of fists and descending body weight -- and realized they had an appetite for more. For me, Chuck Liddell takes the honors on this one. Shortly after graduating college, I found myself in some nameless Maryland bar with some cronies I now rarely keep in touch with, watching UFC 40. When I saw The Iceman land that staggering left kick on Renato Sobral’s head that night in 2002 to finish him in the first round, my light bulb went off. It was like seeing Santa Claus for the first time. Liddell did two things for me. Once I had enough money together and had my own apartment one month after UFC 40, I signed up for my first martial arts class and have not stopped since. And Chuck Liddell made me a loving and respectful fan of MMA. There are few longstanding icons in this young sport, but Chuck was one I always idolized. Thanks for the awakening.

Joseph Myers: The record will state that Chuck Liddell lost five of the final six fights of his career, including his last three by knockout. That isn’t the Chuck Liddell I’ll remember. I’ll remember the fighter who ran roughshod over the UFC’s 205-pound division, produced highlight-reel knockout after highlight-reel knockout and helped usher in the modern era of mixed martial arts. All good things must come to an end, but for me, The Iceman will always remain frozen at the top of his game.

Tristen Critchfield: By the time I interviewed Rashad Evans prior to his date with Chuck Liddell at UFC 88, even the sports media blowhard-types stuck in boxing’s golden era had to acknowledge the exploits of The Iceman, thanks in large part to his stint as a coach on “The Ultimate Fighter” and an ESPN The Magazine cover. The soft-spoken Jackson’s MMA product spoke of beating Liddell in his dreams, and striking coach Mike Winkeljohn pointed out Liddell’s flaws as a counterpuncher, but it still seemed unlikely that the UFC icon would falter against Evans, who, at that point, might have been best known for drawing the ire of Matt Hughes with his hot dogging on the second season of TUF. I watched the fight at your typical UFC household gathering: a mix of casual and serious fans who had all pitched in for the cause of watching some violence in a social setting. The fact that Evans’ shocking knockout of an MMA legend drew a collective gasp from that particular audience was as much a testament to Liddell’s status as an icon in the sport as it was to his opponent’s display of skill.

J.R. Riddell: Liddell became one of the first truly recognizable faces of MMA and was readily identified by fans, casual observers and even many would-be followers who had not yet experienced the joy of MMA. Perhaps one of his biggest contributions to the sport was to demonstrate that an MMA athlete can become iconic and recognizable even to those not indoctrinated in MMA. In many ways, Liddell served as an ambassador of the sport and surely ushered in a host of new fans each time he appeared on a pay-per-view. Of course his signature Mohawk and goatee went a long way to establishing himself as a standout. And who can think of a Liddell knockout without picturing his iconic and primal pose celebrating his triumph over yet another opponent? That pose will forever be immortalized as a piece of MMA iconography.