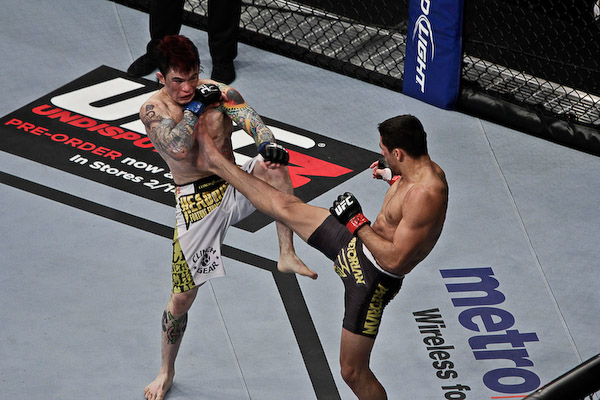 Renan Barao has not lost a fight in nearly nine years. | Photo: Sherdog.com


The Ultimate Fighting Championship is taking its traditional Super Bowl weekend card on site, as bantamweight and featherweight gold will be up for grabs on Saturday at the Prudential Center in Newark, N.J. A day later, the Seattle Seahawks and Denver Broncos will vie for the Lombardi Trophy at MetLife Stadium approximately 10 miles down the road.

In a high-stakes sporting weekend, perhaps no one has more riding on the outcome of UFC 169 than the renowned Nova Uniao camp, which has two of its best and brightest at the top of the card. Renan Barao, now the official bantamweight champion after more injury woes forced Dominick Cruz to vacate the belt, defends the title against Urijah Faber in the main event. Barao already vanquished “The California Kid” at UFC 149 to capture the interim crown, and doing so again would cement his spot atop the division. Meanwhile, teammate Jose Aldo looks to continue his dominance as featherweight champion against Ricardo Lamas in the co-headliner.

Between them, Barao and Aldo have gone 48 straight fights without tasting defeat. Nova Uniao’s dynamic duo will attempt to make it 50 on the biggest stage yet. Here is a closer look at the UFC 169 card, with analysis and picks: 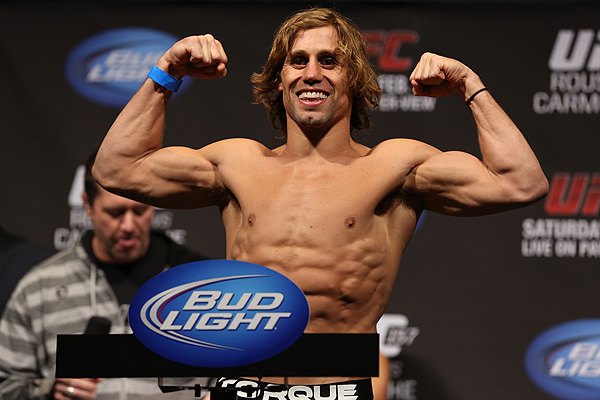 Photo: D. Mandel/Sherdog.com
Faber has won four straight.
The Matchup: Faber’s recent struggles in title bouts are well-documented, but there is absolutely no question the 34-year-old has earned his latest opportunity. In 2013, “The California Kid” produced triumphs over Ivan Menjivar, Scott Jorgensen, Iuri Alcantara and Michael McDonald. Of those four opponents, only Alcantara managed to see the judges’ scorecards. Meanwhile, McDonald, a rising star who came into the matchup with valuable title experience against Barao, was not remotely competitive in losing via second-round submission at UFC on Fox 9.

In that sense, Faber is far more ready to challenge Barao than Dominick Cruz, who ultimately had to withdraw due to a groin tear. While questions surrounding Cruz’s health would have hovered over the event, Faber is at the peak of his powers. One more shot at gold could not hurt.

At least one change is obvious since Faber dropped a lopsided unanimous verdict to Barao at UFC 149, and you can find it in his corner. Back then, Team Alpha Male stablemate T.J. Dillashaw was seen doing most of the talking to Faber between rounds. Today, Duane Ludwig is head coach of the esteemed California-based camp, and the results speak for themselves. Whether that will make a difference against Barao is another matter. Faber claims Barao broke his rib two minutes into their UFC 149 meeting. That could certainly have affected the former World Extreme Cagefighting titlist’s approach, but to blame the loss solely on that would be unfair to Barao.

Faber spent most of UFC 149 spinning his wheels. He repeatedly switched stances in hopes of avoiding taking too much punishment to his lead leg; he faked and feinted without truly threatening his opponent; and despite all of that busy movement, he still found himself fighting at Barao’s preferred range. As a result, Faber absorbed plenty of leg kicks and other combinations from the Brazilian. The ground game was not a factor either way, as Faber failed on all six of his takedown attempts and Barao was more than content to remain standing.

To win the rematch, Faber is going to have to close distance more effectively. His main weapons are his right hand and his wrestling, and if he is unable to catch Barao with an overhand or hook, his best bet lies in attempting to outpace him on the mat. An extended standup war with the champion is a losing proposition. In addition to a crisp jab and hard low kicks, Barao employs front kicks, spinning back kicks, head kicks and jumping knees. He is accurate with his advanced techniques, but even when he misses, he plants a seed of doubt in the mind of his opponent. As a result, someone like Faber might become more hesitant to pull the trigger as the fight moves along. However, Barao does tend to leave himself exposed when throwing multi-punch combinations. This is where the presence of Ludwig could help in exposing what few flaws Barao has demonstrated thus far in his UFC tenure.

Unfortunately, Faber still does not exhibit much of a jab, but against McDonald, he did not need to. His reliance on the overhand right is predictable and leaves him vulnerable to counters. Faber should not abandon his wrestling. His shots were either telegraphed or easily resisted by Barao the first time, but again, perhaps a change in game plan could help to disguise some of those efforts. Attempting to implement a consistent jab also would not hurt.

Barao is too strong to be overpowered, however, and as good as Faber is in making things frantic on the canvas, the Brazilian’s ability to quickly and cleanly transition to submissions should give the Californian pause.

The Pick: It is easy to ask Faber to move into a range where he can land strikes more consistently or to tell him he needs to use his wrestling and submission game to wear down Barao. Each approach comes with a cost, and Faber will not be able to offer anything for which Barao is not prepared. Yes, Faber is better than he was at UFC 149, but at the same time, he is still not superior to Barao. The champion retains his title via decision.