Mixed martial arts promoters have saved the best for last and will delight fans around the globe with a number of excellent December bouts under the Christmas tree.

Much respects goes to the dedicated men and women who sacrifice time spent with family and friends in favor of the gym, pushing themselves to the limit and beyond in order to prepare to entertain the masses. From Brazil to Japan, England to the United States, some of the world’s best fighters will close out 2009 with a bang.

As always, the list does not focus on the major bouts you already know to watch but rather on fights from all over the planet that are worth seeing.

In his unfortunate one-fight stint in the UFC, Grove submitted in a little more than a minute and injured his ankle, knee and ribs in the process. Now, “Goliath” has returned to the promotion that made his star rise -- Ultimate Challenge UK, once known as Cage Rage. In October, he defended the UCUK heavyweight title against hard-hitting challenger Martin Thompson. In his toughest test to date, he next faces Vemola, an undefeated Czech wrestling champion.

Judo black belts Lenogue and Carvalho will duke it out for the vacant WFC middleweight title. On paper, Carvalho comes into the bout as the clear favorite, having won his last four fights, the last three via first-round knockout; the Frenchman, on the other hand, has been on a slide for the past two years. However, Lenogue, a Pride Fighting Championships veteran, has proven extremely durable; the last time he was stopped was more than five years ago. A proud nephew of vale tudo legend Edson Carvalho, the Brazilian has promised another KO en route to the WFC belt.

Despite more prominent names on the card -- including former EliteXC middleweight champion Murilo "Ninja" Rua -- the most competitive matchup will likely take place between Pamplona, an iron-hard muay Thai practitioner, and Speer, “The Ultimate Fighter” Season 6 finalist. Pamplona has a strong reputation in Brazil stemming from legendary feuds against Jorge Patino and Jose "Pele" Landi-Jons, two men he defeated in 2006. Speer has gone 4-1 since being cut from the UFC and will present a stern test for the Brazilian.

Few promoters have been dogged by as much bad luck as Travis Flannagan, the man behind fledgling UK organization Bushido Challenge. With Alexander Gustafsson, Jan Blachowicz, Dragan Tesanovic, Chris Manuel and Dean Amasinger, he had to cope with a quintet of prominent dropouts. Eventually he came through and delivered a European super fight between French Sengoku veteran Rimbon and Spanish standout Tabera. What will prevail -- Rimbon’s excellent muay Thai or Tabera’s powerful wrestling?

Their road to this middleweight showdown could not have been more different. Leites’ head was on the chopping block after becoming the first man to go 25 minutes with UFC champion Anderson Silva, and he was axed from the UFC following a close decision loss to Italian Alessio Sakara in August. Lister, meanwhile, asked for his walking papers from the UFC in hopes of finding better career opportunities elsewhere. At the next Maximum Fighting Championships event, two of the most advanced grapplers in the 185-pound division will go at it.

In the most high-profile bantamweight matchup of the month, Benavidez, a once-beaten Urijah Faber disciple, will challenge Yahya, a Rickson Gracie protégé. Benavidez made his debut on the big stage for Dream in the summer of 2008 but opted to sign with World Extreme Cagefighting instead of taking part in the Japanese promotion’s featherweight grand prix. Yahya, a 2007 Abu Dhabi Combat Club Submission Wrestling world champion, has recovered nicely from back-to-back losses two years ago and now holds a 4-1 mark in the WEC. 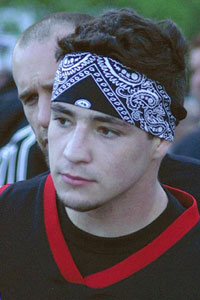 Originally meant to be headlined by Quinton “Rampage” Jackson and Rashad Evans, the UFC 107 main event will now showcase Penn’s third lightweight title defense. He will meet Sanchez, the former King of the Cage welterweight champion and winner of “The Ultimate Fighter” Season 1. “Nightmare” brings aggression and durability to the table. However, he seems to have lost his ability to finish since he moved down to 155 pounds.

In a rematch of their quarter-final clash at the 2003 ADCC Submission Wrestling World Championships, Lindland will try to bounce back from his brutal knockout loss to Vitor Belfort in January when he meets the Brazilian jiu-jitsu ace. In their first encounter, the 2000 Olympic silver medalist had to grapple with Souza and submitted to an armbar in an embarrassing 105 seconds. This time, the 39-year-old American will certainly utilize a different game plan, as he looks to position himself for a shot at Strikeforce middleweight champion Jake Shields.

One must lean upon comparisons in order to understand the magnitude of this fight. Imagine Ronnie Coleman fighting James Toney under MMA rules. Pudzianowski, “The World’s Strongest Man,” has become an insanely popular figure in Poland; he sings in his own band and even appeared on the Polish version of “Dancing with the Stars.” A purple belt in Kyokushin Karate, “Pudzian” appears to have taken the training for Najman seriously. A win for the likable 300-pounder could help the sport of MMA break even further into the Polish mainstream.

In a fight that could make or break Japan as an MMA superpower, 1992 judo Olympic gold medalist Yoshida will take on Ishii, the 2008 judo Olympic gold medalist. Ishii, who turns 23 two weeks before the fight, must shoulder the hopes and dreams of an entire nation yearning for a new Japanese champion to cheer. To begin fulfilling those enormous expectations, the kid from Osaka has to get past the far more experienced Yoshida.