We say goodbye to 2009 and welcome 2010. Our resolution for the New Year: keep the good and get rid of the rest as it relates to the “10 Tussles” series. In that spirit, the decision was made to exclude main card bouts from major promotions, which turns this feature into even more of a drop-in center for hardcore fans.

Stick around in 2010, as your mixed martial arts tour guide gets even more funky, exotic, offbeat and diversified.

Polish fans just love their tournaments. From the major draws put on by their flagship event, KSW, to those at small amateur shows, having fighters compete in more than one bout in a single night somehow seems to strike a nerve with the Poles. Within the framework of the Bushido 6 tournament -- promoted by black belts turned promoters Mariusz Linke and Tomasz Jopek -- two talented young Brazilian jiu-jitsu players, Abramiuk and Sowinski, will clash. Sowinski, a Silesian Cage Club fighter who boasts UK experience, stands as the pre-tournament favorite entering the event.

Some heated rivalries in Brazil always raise tempers, Brazilian Top Team versus Chute Boxe Academy chief among them. A flame that burned continually during Pride Fighting Championships’ heyday, the rivalry between the two camps has cooled but has not gone out. In the main event of the first Brazilian show of 2010, Melquisedec da Silva, a Chute Boxe-based Jean Silva disciple, will take on Janailson, who just turned 24 and represents the next generation of fighters coming out of BTT.

It was the snap, crackle and pop heard ’round the world and a sight that made even the most hardboiled fans cringe -- Hill’s lower leg twisting 90 degrees after he kicked Dale Hartt in the shin at UFC “Fight for the Troops” in December 2008. Now, more than a year later, MMA’s tallest lightweight appears ready to get back into the mix. At Raging Wolf 6, which takes place on Seneca Indian territory, Hill faces Dizak, a journeyman fighter who has become a regular on the East Central Canada circuit.

In the preeminent flyweight matchup of the month, Shooto’s number one-ranked 114-pounder, Takeuchi, will take on the ninth-ranked Abe. Takeuchi, 36, has rattled off three straight wins, including significant victories over fourth-ranked Katsuya Murofushi in November 2008 and sixth-ranked Takeshi Sato in July. He has designs on positioning himself for a shot at Rambaa Somdet’s flyweight title. Abe, not to be confused with his more prominent namesake, has other plans.

The Hoosier State’s MMA Big Show has been busy, with a total of seven events last year, and it will carry that momentum into the New Year. While the promotion’s latest main event pits heavyweights Gary Goodridge and Ron Sparks against one another, the true gem on the Jan. 9 card pairs Zachrich, a veteran of “The Ultimate Fighter” Season 7, with Sutton, an undefeated Indianapolis prospect. Their respective game plans are no secret, as Zachrich will look for submissions, while Sutton has revealed himself as an advocate of good ole ground-and-pound.

*Sherdog.com learned Thursday that both the Goodridge-Sparks and Zachrich-Sutton matchups, along with a third professional bout, were pulled from Saturday’s event.

Indiana State Athletic Commission Director Wade Lowhorn said the regulatory body would not allow Goodridge to compete in the state due to his Dec. 31 technical knockout loss to Gegard Mousasi in Japan. In addition, Lowhorn said the commission and the promotion are working together to satisfy new deadline requirements instituted on Dec. 1 for licensing and medical paperwork.

“The timing just wasn’t there over the holidays,” said Lowhorn.

Saturday’s MMA Big Show will proceed as an amateur-only event. The promotion said it would also return on Feb. 20 with its pro-amateur “Triple Threat” event. 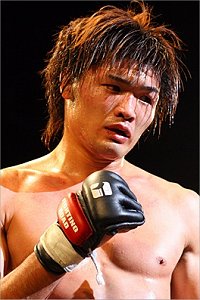 Two men who did not have much luck in last year’s Dream welterweight grand prix will meet when Deep champion Ikemoto squares off with Shirai, an M-1 Challenge veteran. Despite first-round exits in the Dream tournament, the added exposure was a boost for their careers; they will now face each other for Ikemoto’s welterweight championship. It will mark the second defense for the 34-year-old freestyle fighter and a particularly tricky one, as he looks to rebound from two straight losses. Meanwhile, Shirai has won a pair of fights since his submission loss to Jason High.

He just keeps going and going and going. Entering the 15th year of his remarkable career -- and 107th documented professional fight -- Horn shows no signs of slowing down. A true pioneer and student of the game, the 34-year-old submission specialist has tested himself against the Shamrocks, Liddells and Coutures of the MMA world. When his fourth run in the UFC ended in January 2008, he returned to the business of painting regional events red with the blood of his foes. Moreno has already faced a dozen UFC veterans, so he certainly will not be star struck when he challenges Horn.

How can King of the Cage run an event in Japan when the UFC cannot? Well, KOTC front man Terry Trebilcock and company have teamed up with San Diego-based Japanese media company Ronin Productions, and a nice, tight card at the Okinawa Convention Center has resulted from the partnership. In the co-headliner, former KOTC lightweight champion Hervey, fresh off his five-round war with Takanori Gomi, will take on Boku, a 2007 Cage Force tournament finalist and Dream veteran.

Called Out MMA’s sophomore effort, originally slated for Nov. 14, was set to feature Crane, a UFC veteran, against the once-beaten Wander Braga. The Brazilian jiu-jitsu black belt has since been replaced by Affliction veteran Albert Rios, who figures to pose an equally adequate challenge for Crane. Both men come from submission backgrounds, but Rios has used a more controlled approach in the past. Their clash will be contested at a catchweight of 150 pounds.

Co-promoted by Dutch organizations Beast of the East and M-1 Global, this matchup holds up to any fights that were made last year. Jocz, universally recognized as one of the top three middleweights in Poland (Mamed Khalidov and Tomasz Drwal are the other two), will lock horns with Amoussou, long championed as one of Europe’s brightest prospects. It figures to end in a tapout or knockout, as a master grappler takes on an explosive kickboxer.