Welterweights are the name of the game this month as three of the top 10-ranked 170-pounders in the world and a trio of the best European 77-kg fighters go at it in October.

Sherdog.com has compiled a list of 10 worthwhile battles to watch outside the blockbuster fare of Anderson Silva vs. Patrick Cote and Kevin "Kimbo Slice" Ferguson vs. Ken Shamrock, all within the span of 31 days.

With Dream and Sengoku already firing their big guns in late September, it is former Pride feeder show Deep who will put on the most compelling fight in Japan this month. Matchmaker extraordinaire Shigeru Saeki has found probably the two best featherweight fighters currently not under contract with a major Japanese promotion. Uematsu (15-7-2) is a strong grappler who holds wins over Shooto champions Caol Uno and Hideki Kadowaki, while “DJ.taiki” Hata (8-5-3) excels on his feet, underlined by a TKO win over King of Pancrase Yoshiro Maeda.

This bout has “old school” written across it in big red letters. Schrijber (20-16-1) comes out of a 41-month retirement to take on Englishman Patterson (3-4). “Zulu” -- as the man from Coventry is called -- is well known in the Netherlands from his legendary wars with Schrijber’s longtime associates Hans Nijman and Dick Vrij. With both men preferring the knockout to end their fights, fans at the completely sold-out Ahoy Arena in Rotterdam are in for a battle.

The Strike & Submit European welterweight title is on the line for a pair of Europe’s most promising welterweights. Only 23 years old, German Weichel (15-5) has had mixed success fighting in the UK, defeating former Cage Rage British lightweight champion Abdul Mohamed and Brazilian submission expert Josenildo Ramarho. He has also suffered losses against Paul Daley and UFC fighters Thiago Tavares and Dan Hardy. Irving (8-5-1) has gone undefeated for close to two years and comes off a decision victory over tough-as-nails Swede Reza Madadi.

There is a reason why this middleweight tilt will lead off EliteXC’s third Saturday Night Fights broadcast on CBS. Former Pride brawler Rua (16-8-1) is on a mission to try and regain the 185-pound title Robbie Lawler plucked from his waist a year ago and has reeled off two consecutive wins to prove it. Radach (18-4) is a recent acquisition from the defunct International Fight League, where the heavy-handed Washington native pillaged for five straight bouts before falling to underdog Matt Horwich in December 2007. Expect punches in bunches for this experienced pair. 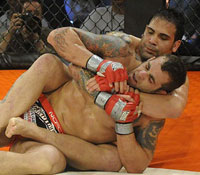 The Lord works in mysterious ways. Once a proud UFC and Abu Dhabi World Submission Grappling champion, Rodriguez (32-9) will now ply his trade in Liverpool, England. What was unthinkable three years ago is now made possible by Cage Gladiators, one of the fastest rising promotions in the UK. Rodriguez’ opponent will be no slouch either. Massive 280-pound colossus Broughton (7-3-1) is a former Cage Rage British heavyweight champion and has convincingly defeated the likes of James Thompson, Robert "Buzz" Berry and Eric "Butterbean" Esch.

Under normal circumstances a guy like Fickett (35-6), who holds wins over UFC stalwarts Kenny Florian and Josh Koscheck, would be under contract with Zuffa. Though Fickett has been freelancing for his last six fights, the 28-year-old submission specialist has managed to keep his notoriety up during that time with his behavior in and out of the cage. Taylor (6-3) missed his first shot at fame on “The Ultimate Fighter 7.” Now both of these wandering standouts have the chance to prove they do belong in the upper echelon of MMA as they fight each other outside of the Octagon.

What is a promoter to do if his top ace defeats one of the continent’s best judo players? Book a fight against the older, more well-rounded and experienced brother of the losing fighter. This scenario began to unfold at the Superior Challenge in Sweden earlier this year when undefeated featherweight Aziz (4-0-1) took out Frederic Fernandez. Now Aziz, a Bodog Fight standout, gets to feel the wrath of older sibling Emmanuel (9-4-1). “Pythagoras” is currently ranked No. 2 at 145 pounds in Europe and is certain to put on a jiu-jitsu clinic against Aziz.

After a few deviations that led to two crushing first-round defeats at the hands of Yoshihiro Akiyama and Gegard Mousasi, former top 10 ranked middleweight Kang (30-10-1) has returned to his roots. At the end of August, he made short work of experienced wrestler Jae Young Kim in Korea, homeland for Kang’s father. Two months later, Kang will fight in his home country for the first time in over five years as he takes on always-dangerous kickboxer Eastman (15-8-1).

This was the fight British welterweight Daley (18-6-2) has been looking for since he put his signature to paper with EliteXC. After proposed title fights between Shields (21-4-1), Drew Fickett and John Alessio did not come to fruition during the first go-around, “Semtex” immediately jumped at the chance to get a crack at Sherdog.com’s No. 6 ranked welterweight when the offer came again. The question is whether the 25-year-old Brit, who promised a knockout over the Californian, has the wrestling and grappling prowess to survive a ground clash with his much more seasoned foe.

On the undercard of UFC 90 “Silva vs. CÃ´té” there is a fight worthy of headlining its own show -- the original “Ultimate Fighter” Sanchez (19-2) will square off against white-hot Brazilian knockout machine Alves (15-3). Though not announced officially, this bout is for No. 1 contender status of champion Georges St. Pierre’s crown. If the “Nightmare” comes in the shape and with the aggression he showed in his last fight against Luigi Fioravanti and the “Pitbull” can duplicate his performance against Matt Hughes (minus the weigh-in fiasco), fight fans are in for a “fight of the year” caliber confrontation.