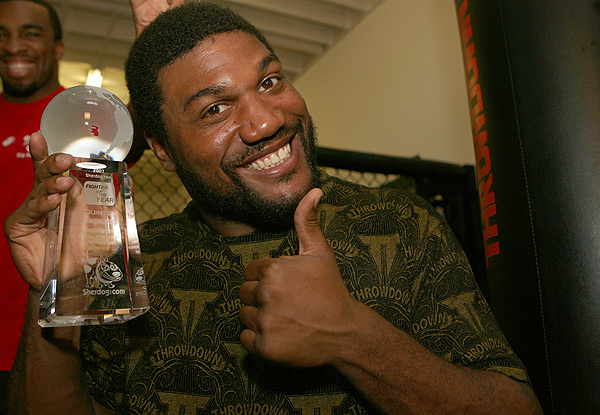 Quinton Jackson, accepting his award as Sherdog.com's 2007 "Fighter of the Year"


3) What was your most pleasant interaction with a fighter?


Jordan Breen: I’ve been doing this long enough that it’s difficult to say, just based on pure volume. It also depends on what you mean by “pleasant”; I’m not someone looking for a humorous and easy interaction. What excites me about MMA is getting insights about the actual sport or learning about the people who inhabit it. I cherish every time I got to listen to former UFC matchmaker Joe Silva tell me what an idiot I was for thinking such and such a thing about a particular matchup or rant about everything the MMA media was screwing up and getting wrong; I still love current UFC matchmaker Sean Shelby for the same reason. I love every opportunity I’ve got to talk to someone like Jeff Osborne, who was such a formative trailblazer in this sport and was really the first promoter who helped puts women’s MMA on the map in the West.

But, the fact of the matter is that this is MMA; for as many great interactions I’ve had with fighters, trainers and promoters over the years, I wouldn’t necessarily size up the most formative interactions I’ve had as “pleasant.” In fact, in tends to be the opposite. I think of moments like Jeff Monson blindsiding me on radio and admitting he is a steroid user, I think of sitting in a hotel room at Tachi Palace and having Ian McCall with tears in his eyes telling me about when he went to go collect money on a truck he’d sold to Justin Levens, only to walk into a police scene after Levens killed himself and his wife Sara. I think about every uncomfortable time I’ve interviewed one of the Diaz brothers and on a second-by-second basis, not knowing what was going to happen next, whether my last question had pissed them off or if I said the wrong thing, whether or not I’d get cuffed in the head.

If you cover MMA for a living, sure, you can have a lot of “pleasant” interactions; you can have a chummy conversation with Greg Jackson or sit in disbelief at the cherubic nature of Sage Northcutt. However, that’s not what I prize about MMA; what makes this sport fascinating for me is that not only do you encounter a whole gamut of world-class athletes, but in that pursuit, you encounter people who have intensely human stories. It’s not easy to sit on the other end of the phone or look at someone like Sara McMann in the face when she describes falling asleep at the wheel, flipping her Jeep and killing her fiancee. However, these are the same people who go into the cage, entertain us and seek prizefighting greatness. I think MMA is a noble pursuit and it takes a certain kind of character to have the skill and compunction to actually pursue it; I’m not much interested in those sorts of pleasantries, but just figuring out what compels someone to put those gloves on.

Jason Burgos: Most of my work for Sherdog comes in the form of interviews over the phone. In those instances, I have had many enjoyable encounters. Conversations with Demetrious Johnson, Ilima-Lei MacFarlane and Joe Warren stand out the most. In person, Douglas Lima without a doubt. I spoke with him backstage after Bellator 208 and the man was equal parts cool and gracious. Moreover, he remembered me from a previous interview so that helped a lot too.

Edward Carbajal: Most are pleasant, but speaking with Saad Awad after watching him fight for so long was pretty cool to me.

Jordan Colbert: Being born and raised in San Jose, California it isn’t uncommon to see AKA fighters around the city. I’ve ran into Daniel Cormier a couple of times but seeing him at Bellator 206 in San Jose and have him tell me it was refreshing to see an African-American in the MMA media row was very cool.

Tristen Critchfield: In general, the vast majority of surface level interactions with fighters have been pleasant. For example, I remember Jon Jones congratulating me when I was first started writing for Sherdog on a contributing basis some eight years ago. Or Clay Guida telling me his parents enjoyed a piece I wrote.

I’ve also had others refuse interviews or try to get me kicked out of the gym because they were displeased with something I wrote, regardless of the facts involved. But for the most part, fighters are cordial when dealing with media.

One interaction that stands out was when I was just getting started covering MMA for the Albuquerque Journal. I wrote a feature on Joey Villasenor ahead of his EliteXC “Primetime” bout against Phil Baroni in May 2008. Villasenor, who was known as “Uncle Joe” by his Jackson’s MMA cohorts for his leadership role in the gym, texted to thank me for writing the story after his victory on network television. To this day, that type of gratitude remains rare in my experience.

Jacob Debets: Probably the time I met Randy Couture in Washington DC, where he was lobbying with members of the Mixed Martial Arts Fighters Association for the Muhammad Ali Expansion Act late last year. He was such a nice, thoughtful dude and after we got through the serious questions we talked about pets.

Ben Duffy: I’ve never had a truly unpleasant one, knock on wood. But one that stands out for pleasantness was speaking with Phil Davis earlier this year. The call had to be pushed back by over two hours, and by the time we talked he had had a 12-hour day of nothing but media obligations. Given the length of his day and how long he’s been a star in the sport, I fully expected the interview to be like pulling teeth.

Not so; he was engaging and personable, not in his “Mr. Wonderful” persona but simply in the sense of giving me his full attention and coming back with some very thoughtful answers. He ended up stretching our interview longer than scheduled completely on his own steam (which is probably why he was running behind in the first place). As someone who feels fortunate to be involved in mixed martial arts on a professional level, it’s always encouraging to meet others who feel the same way, and Phil clearly does.

Tom Feely: My interactions with fighters are mostly limited to hanging around as a fan at some of the smaller events, the nicest of which was - perhaps a bit surprising, given his rep as being a prickly personality - Uriah Hall after the Cyborg versus Tweet Invicta card. He cracked some jokes and was generally jovial, and it probably helped that it seemed like he'd had a few.

Mike Fridley: Getting to know Hammer House fighters during the Pride Fighting Championships heyday. The team used to workout with current/former OSU wrestlers and local fighters at the Ohio State University’s Steelwood Athletic Facility. Guys like Kevin Randleman, Mark Coleman and Wes Sims were every bit as intense as one might assume.

Brian Knapp: I interviewed Fred Ettish for a "Where is He Now?" feature on Sherdog.com in 2009, and he was one of the nicest and most accommodating people I've ever encountered in any sport. Considering all he has endured, personally and professionally, the opposite should have been the case. I found him to be honest, forthcoming and gracious.

Tudor Leonte: Oh, one I will always remember is when I spoke with Mara Romero Borella about her debut in UFC. She was super excited about it and I felt all her energy.

Adam Martin: For the most part I have had nothing but pleasant interactions with fighters, but for me there would be two instances that stand out in particular. The first was with Jonathan Goulet, who I met through a mutual friend while covering UFC 158: GSP vs. Diaz in Montreal. Goulet was retired at the time and working as a photographer, but he was one of the nicest human beings I've ever met and we spent a couple hours talking about the sport in a bar nearby the Bell Centre.

The second would be with Vinny Magalhaes. I interviewed Vinny in his bedroom while he was cutting weight before his UFC 152 fight in Toronto against Igor Pokrajac. It was one of the first times I hung out with a fighter in person and I appreciated the time Vinny spent with me to write a great story. I still keep in touch with Jonathan and Vinny to this day.

Jay Pettry: It’s probably obvious that most of my best interactions with fighters have been when discussing their walkout music with them. Fighters can get tired of the same six questions, so a question about why they walk out to the song they use can break up the monotony. The best one I can recall was with Matt Brown, who explained to me what he went through when the UFC banned his walkout song written specifically for him. It broke past the media/fighter barrier and turned into two guys talking about music, which was refreshing and enjoyable.

Mike Sloan: Well, he was a trainer, though he could fight like hell. It was my friendship with Robert Follis, the man who gave me my first stripe in jiu-jitsu. He was not only a great mentor and teacher, he was a great friend. It sucks that he’s gone and there isn’t a day that I don’t think about him. There isn’t one specific moment because I can go on for days about him. He’ll be missed forever.

However, if you’re looking for a specific moment with a fighter, it had to be the first time I hung out with Chuck Liddell at a Slayer concert. This fan came up to him before Slayer came on stage, shook his hand and yelled about how big a fan he was. The funny thing is, he kept calling him Randy Couture and this was a few months after Randy beat him the first time they met.

Eric Stinton: I can’t say I’ve had any memorable interactions with fighters, to be honest. Basically everyone I’ve met has been pleasant and courteous. Maybe I’m just a really nice, cool guy.

Anthony Walker: For the most part I’ve had great interactions with the fighters. It’s hard to pinpoint anyone in particular as a standout. Brian Ortega, Aljamain Sterling, Tyron Woodley, Stephen Thompson, Joseph Benavidez, Daniel Cormier, and Andre Ewell instantly come to mind. But I’ll give Dan Hardy the nod for this question. I spotted him all around the Vegas strip the week of UFC 229 with his green tourist visor. Of course, he had his favorite hat on in the media room and was in full fun mode. When I interviewed him, he caught a glance of one of the wedding pictures on my phone’s wallpaper which led to some married guy small talk before I got my own customized breakdown of Anthony Pettis and Tony Ferguson. Generous with his time, genuine, enthusiastic, and engaged throughout our entire interaction. Hardy was pure class and a gentleman.

Kevin Wilson: I attended the UFC on Fox 24 weigh-ins in Kansas City last year and the UFC tonight crew was there doing live coverage. Between takes I watched Daniel Cormier stop and take pictures with every single person that lined up while the other analysts stayed at the desk and looked at their phones. He had a big smile on his face the entire time and genuinely didn’t looked bothered at all.

Next Page » We're Fans Too