Kenny Florian made an emphatic statement at UFC 91.

In what many may argue was his best performance in the Octagon, Florian submitted Joe Stevenson with a rear-naked choke 4:03 into the first round at the MGM Grand Garden Arena in Las Vegas. The victory established the 32-year-old Florian (11-3) as the clear No. 1 contender for B.J. Penn’s UFC lightweight championship.

Florian used nice footwork and crisp striking to seize control of his bout with Stevenson. Taken down inside the first minute, Florian quickly returned to a standing position and delivered a powerful takedown of his own. He then popped Stevenson (29-9) with a big right hand on the ground, mounted the Brazilian jiu-jitsu black belt and secured back control against the cage. A rear-naked choke followed, and Stevenson raised the white flag after a brief struggle.

“I’m working hard every single day,” said Florian, who will carry a six-fight winning streak into his next match. “I’m out there training. That’s all I do.”

Hazelett (12-4) weathered an early flurry from Tamdan McCrory and established himself standing. He got McCrory’s attention with a solid right hand and then grazed his head with a kick that brought the action to the ground. Once there, McCrory (9-2) was simply outmatched.

Smooth and precise, Hazelett worked his magic on the mat. The bearded Kentucky native trapped McCrory in an omaplata and transitioned to a straight armbar, wrenching McCrory’s shoulder and coaxing the submission 3:59 into the first round. Hazelett has rattled off five wins in six fights, a loss to the highly rated Josh Koscheck the only hiccup. Nine of his 12 career victories have come by submission.

“I want to be the best jiu-jitsu guy in MMA,” Hazelett said.

The former heavyweight title challenger continued his climb back up the ladder and stopped UFC newcomer Josh Hendricks on strikes 1:01 into round one.

Based out of Wadsworth, Ohio, the 32-year-old Hendricks (15-5) tried to clinch with the Brazilian. Gonzaga (10-3) easily controlled the position, freeing him to throw a left hook and knees to the body.

After catching Hendricks with multiple strikes, the 29-year-old Gonzaga measured him for a straight right hand and delivered it. Hendricks dropped, and referee Steve Mazzagatti intervened after another Gonzaga right hand on the ground. A former Gladiators Fighting heavyweight champion, Hendricks had not tasted defeat since February 2005. 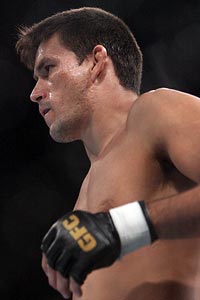 Maia (9-0) pulled guard in the first half minute of the fight, swept Quarry onto his back and went to work with world-class precision. The 31-year-old Brazilian quickly moved to mount, forced his opponent to surrender his back and began chipping away at Quarry’s considerable submission defense.

Unable to shake Maia, Quarry (10-3) succumbed to his efforts 2:13 into round one when the Brazilian cinched a rear-naked choke for the tapout. None of it, Maia said, was by design.

“I never have a strategy when I come into a fight,” Maia said. “I just fight.”

An emerging threat in the middleweight division, Maia has delivered all four of his wins inside the Octagon by submission. He leaves his immediate future in the hands of UFC brass.

“It’s up to [UFC matchmaker] Joe Silva and all the other guys,” Maia said. “There are many tough guys that I can fight.”

Aaron Riley (27-10-1) picked up his first UFC win in three tries with a gutsy unanimous decision over Jorge Gurgel (12-5).

Riley, 27, of Tell City, Ind., outgunned the 31-year-old Gurgel with sharp striking in close quarters while blocking a persistent head kick from his foe.

With the fight looking even heading into the third, Riley chose his strikes well and roughed up Gurgel with left-right punch combinations. Riley’s effort was enough to claim scores of 29-28 on all three judges’ cards. The loss was Gurgel’s fourth in seven Octagon outings.

Rafael dos Anjos saw his nine-fight win streak come to a screeching halt, as Jeremy Stephens of Des Moines, Iowa, knocked the UFC newcomer out cold with a flurry of right hands 39 seconds into the third.

The path to victory didn’t come easy for Stephens (14-3), as the Brazilian showed off some impressive movement on the floor through the first five minutes of action. Dos Anjos, 24, took some mild punishment in the second round of the lightweight tilt, eating leather from his back while working an offensive guard.

Stephens came out swinging to start the final round, and he connected with a crisp uppercut that dropped dos Anjos (11-3) to the mat. The 22-year-old swarmed with a barrage of right hands, prompting Mazzagatti to save the Gracie Fusion fighter.

Bocek, 27, dominated the Denver-based fighter through two-plus rounds with tight positioning and control on the canvas. After taking a 20-18 lead on the Sherdog.com scorecard, Bocek turned up the heat in the final stage, landing hard punches to the face of his trapped opponent and looking to finish the 26-year-old veteran.

Robinson (9-4) turned over and exposed his back to avoid punishment, which gave Bocek the space he needed to latch on a fight-ending rear-naked choke. With the win, the Toronto resident upped his record to 6-2.

In the evening’s opening bout, Cincinnati native Matt Brown stopped welterweight Ryan Thomas with an armbar in the second period.

The 27-year-old Ohioan attempted a torrent of submissions in the first round, but Thomas was game, escaping danger and landing effective kicks and punches.

Thomas, 24, wasn’t so lucky in the follow-up frame. After scoring a takedown to start the stanza, the fighter from Danville, Ill., found himself locked in a tight armbar from his opponent’s guard. Thomas tried to slam his way out of the technique but was forced to tap at the 0:57 mark.

Brown, who bounced back from a razor-close split-decision loss to Dong Hyun Kim at UFC 88, improved his record to 8-7 with the victory. Thomas (9-3) dropped to 0-2 in the Octagon.

Mike Fridley and Mike Sloan contributed to this report.