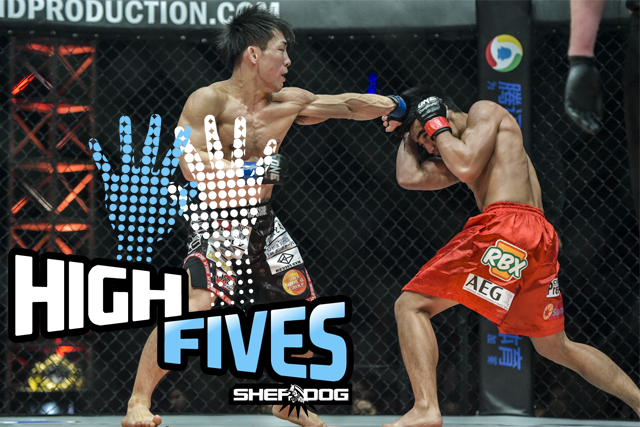 UFC Fight Night 143 was not the only show of consequence during the weekend of Jan. 18-20. One Championship “Eternal Glory” on Friday in Jakarta, Indonesia, hosted a riveting title fight and some emphatic finishes, while two championship bouts highlighted CES MMA 54 on Saturday in Lincoln, Rhode Island. Those events provided the material for this edition of High Fives.

A NEW CHAMP … The One Championship headliner was a strawweight affair that pitted Japanese challenger Yosuke Saruta opposite reigning divisional titleholder Joshua Pacio of the Philippines. Saruta utilized his wrestling to force takedowns and land relentless ground-and-pound. On the feet, Pacio threw effective punches and a variety of kicks. After five rounds, Saruta was awarded the win by split decision. In claiming the belt, “Tobizaru No. 2” upped his record to 19-8-3. The deposed Pacio slipped to 13-3.

BRUTAL BEATDOWN … In One supporting action, Singapore’s Christian Lee clashed with Edward Kelly of the Philippines at featherweight. Lee dominated from the start. The end came via a barrage of Lee ground-and-pound from the mount position, including several heavy right-side elbows to the head. Just 2:53 into Round 1, the referee called a halt to the beatdown. In emerging victorious by technical knockout, the 20-year-old Lee moved to 11-3. Meanwhile, Kelly dipped to 11-6.

DOMINANT DEBUT … Elsewhere under the One Championship flag, Won Il Kwon of Korea met Anthony Engelen of the Netherlands at featherweight. A right cross from the Korean sent Engelen falling back against the cage. Kwon immediately pounced on his prone rival and delivered two right hands before the referee dived in to prevent further punishment. The official time of the stoppage was 1:07 of Round 1. By winning his promotional debut, “Pretty Boy” improved his unblemished record to 3-0. Engelen dropped to 8-5.

Beautiful sequence from Nate Andrews and the lightweight champ becomes 15-1 with 15 finishes on his career, and makes it 9 straight for the longest win streak in @CESMMA history! #CES54 #UFCFIGHTPASS pic.twitter.com/pSwW24XCks

DEFENDING THE CROWN … CES MMA 54 was headlined by a title fight that saw lightweight champion Nate Andrews meet challenger Bryce Logan. The reigning champ impressed with a southpaw right jab, which he used to set up his left hand. A little over halfway through the first frame, Andrews dropped the challenger with a left uppercut-right hook combination to the head. Logan immediately grabbed hold of Andrews’ right leg and held on. Although Logan managed to secure the single-leg takedown, Andrews snatched his neck from the bottom and elicited the tap via guillotine choke at the 1:42 mark of Round 1. In defending his crown for the second time, “The Snake” improved to 15-1. Logan fell to 9-4.

Let's take another look at that stunning finish by Tony Gravely! Take a bow!#CES53 @CESMMA pic.twitter.com/Vv5g4DVnSr

RESOUNDING KNOCKOUT … In the CES MMA 54 co-headliner, Tony Gravely made the first defense of his bantamweight belt against Kris Moutinho. The champion used his strong wrestling from the outset. In the fourth round, Gravely dumped the challenger to the mat with a takedown from the clinch. Moutinho promptly grabbed Gravely’s right arm from the bottom and set up an armbar, to no avail. Gravely picked him up and slammed him on the canvas twice, the second impact knocking Moutinho out cold. After three subsequent right hands, the referee intervened 4:02 into Round 4. In retaining his title, Gravely climbed to 17-5. Moutinho slipped to 7-3.