TOKYO -- Greatest Common Multiple took another step towards the climax of two tournaments on Saturday, as the featherweight final and one of the bantamweight finalists were determined at Cage Force 8 at the Differ Ariake Arena.

In the main event, Yuji Hoshino -- fresh off his upset victory over Antonio Carvalho in June -- bullied and beat up the smaller Takeshi Yamazaki en route to a third-round submission win against the Brazilian jiu-jitsu black belt.

Perhaps a testament to the fact that Hoshino (15-7-7) cut his mixed martial arts teeth at welterweight in Pancrase, Yamazaki could do little to stop the Wajutsu Keishukai freight train. Hoshino resolutely prevented his foe from capturing the single leg, often forcing him to the mat instead. With his face pressed into the canvas and his arm wrapped in a whizzer, Yamazaki (14-9-2) was at one point defenseless as Hoshino rained down brutal hammer fists and elbows.

After he doled out punishment for two full rounds, Hoshino shot in for a single leg of his own, dragged Yamazaki to the mat and locked him in a kimura. With his arm wrenched far behind him, Yamazaki let out a painful scream before he tapped out 3:23 into the third.

Opposite Hoshino in the featherweight bracket, Shooto wild child “Wicky” Akiyo Nishiura took a razor-close unanimous decision from Fanjin Son in the other semi-final. 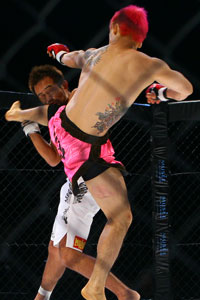 Daniel Herbertson/Sherdog.com
"Wicky" lands a kick on Fanjin Son.
Nishiura (9-2-1) seemed to impress the judges with his ability to stay off the cage when the two clinched. The several right hands he landed to Son’s face from the second round on helped him build up points, too. Son (5-3), to his credit, pursued Nishiura and returned much of the fire, scoring with low kicks, push kicks and hard one-two combinations.

Though most of Nishiura’s strikes grazed Son, were deflected or simply did not exact as much damage as fans have come to expect, the 25-year-old’s efforts were enough for the judges to side with him.

Taking cues from chief cornerman Kenji Osawa, the eccentric Suzuki (8-6-3) came out swinging and got the best of Oishi in the first round with leg-stiffening hooks and dirty boxing. Suzuki could not maintain his pace, however, and by the second round, he had punched himself out, allowing Oishi to pull in front with straight punches, standing elbows in the clinch and energy-sapping knees to the body.

By the third round, the forward-moving Suzuki was a shell of his former self, unable to punch effectively or secure an inside trip. The soon-to-be 40-year-old Oishi (19-9-7) beat on him for the final five minutes before being awarded the victory.

Yoshihiro Koyama gave the judges some time off in his lightweight bout against newcomer Bum Chang Kang.

Koyama (11-2-1) overwhelmed Kang, as he landed a hard straight to his jaw in the opening moments of the bout before taking down the greenhorn. Kang (0-1) looked to capitalize on Koyama’s intention to pound him out, as he climbed his legs and searched for a submission. Koyama’s pressure proved too much. As the punishment piled up, Kang rolled into a fetal position, and the referee jumped in 3:25 into round one.

Meanwhile, Takeya Mizugaki took a few minutes to trade heavy leather with last-minute replacement Daisuke Endo before doing what he does best -- securing the takedown and dominating on the ground.

Once the action hit the floor, Mizugaki (10-2-2) immediately passed to mount and looked to rain down punches, forcing Endo (3-2) to surrender his back. Mizugaki cinched the rear-naked choke for the submission 4:34 into the first round of the non-tournament bout.

What appeared to be an accidental clash of heads in the clinch resulted in a cut and led to Daisuke Okumiya walking away victorious against Tetsuo Seto. Their welterweight bout lasted just 1:34. The victory snapped a three-fight winless streak for Okumiya (2-2-1).

Elsewhere, a bout pairing Yuta Nezu with Ryo Taguchi started out as a war of kicks and then quickly evolved into a high-flying free-for-all for “Fight of the Night” honors.

Nezu (5-2) matched Taguchi tit for tat until he put him away in the third. Barely avoiding Taguchi’s punches and kicks, Nezu returned with hard hooks and savage kicks until the weight of the damage brought Taguchi to his knees. After chopping down his wounded foe with leg kicks, Nezu delivered three devastating punts to the body and one foot stomp before the referee intervened 36 seconds into round three.