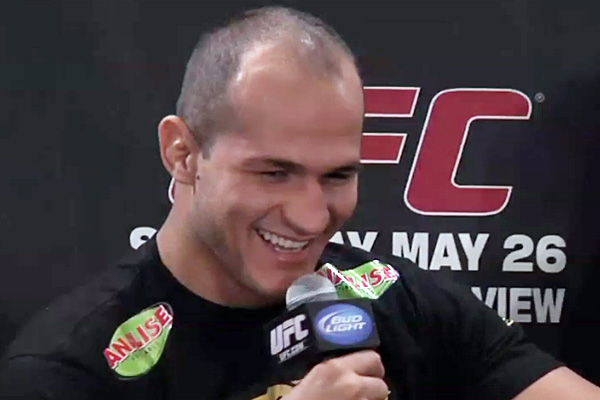 His torso soaked in the blood of his fallen opponent, Cain Velasquez made his plea for a rematch, not with words but with the resounding thuds of his elbows and punches.

Six months after he relinquished the Ultimate Fighting Championship heavyweight title, Velasquez steamrolled Antonio Silva in a first-round technical knockout in the UFC 146 co-main event on Saturday at the MGM Grand Garden Arena in Las Vegas. The American Kickboxing Academy stalwart sliced open Silva’s face with a series of short elbows, transforming the Octagon into a gory playground.

Velasquez grounded “Bigfoot” in a blink and unsheathed his ferocious top game. The blood was not far behind. An examination by the cageside physician gave Silva a brief reprieve but only prolonged the inevitable. Soon after, Velasquez was dropping his punches with violent precision. Silva could not have envisioned a ruder welcome to the Octagon.

In the UFC 146 headliner, heavyweight champion Junior dos Santos was powerful, poised and precise, as he dissected Frank Mir in a second-round TKO. The 27-year-old Brazilian has won all nine of his fights since arriving in the UFC in 2008, finishing seven of them. Velasquez remains his most prominent victim, brought down in 64 seconds at UFC on Fox 1 in November, and undoubtedly wants a chance to reclaim the throne that was once his. Considering their latest performances, the time to sign the rematch has arrived.

In wake of UFC 146 “Dos Santos vs. Mir,” here are five other matches that need to be made:

Frank Mir vs. Antonio Silva: As many feared, Mir was outgunned against dos Santos. Kept at a distance by the Brazilian brute, the former UFC heavyweight champion was little more than a big fish in a small barrel. Even so, Mir remains one of the UFC’s most accomplished and bankable big men, anchored by his ruthless submission game and marketable personality. His 14 UFC wins still rank first on the all-time list for heavyweights. Much like Mir, Silva found himself hopelessly entangled in a mismatch, as he succumbed to Velasquez’s savage ground-and-pound in an ill-fated promotional debut. Neither Mir nor “Bigfoot” figure to fall far in the heavyweight pecking order, and with both men now on the rebound, a matchup between them works quite well.

Roy Nelson vs. Travis Browne-Ben Rothwell winner: Belly and beard in tow, Nelson needed less than a minute to dispatch Sengoku, Bellator Fighting Championships and EliteXC veteran Dave Herman. One well-timed and well-placed overhand right did the trick. Nelson, who turns 36 next month, may never fully shed his sideshow label, but he remains an imposing obstacle for anyone attempting to navigate the shallow but hazardous waters of the heavyweight division. Skilled and durable, he has compiled a respectable 4-3 mark in the UFC. The promotion could go in any number of directions with the man they call “Big Country,” but the winner of the forthcoming bout between the undefeated Browne and the resurgent Rothwell at UFC on Fox 4 in August could loom large. Nelson would fit nicely into the future plans of either man, especially Rothwell, with whom he has plenty of unfinished business.

Stefan Struve vs. Antonio Rodrigo Nogueira-Cheick Kongo winner: Because Struve has surfaced as one of the UFC’s trusted gatekeepers, there is a tendency to dismiss the Dutchman, even though he will not turn 25 until February. He has plenty of time to grow into his skills and 6-foot-11 frame. Struve executed his game plan to perfection in submitting the one-dimensional Lavar Johnson with a first-round armbar. With eight wins in his past 10 appearances, he deserves a more substantive challenge. Nogueira and Kongo will toe the line against one another at UFC 149 in July. Struve has done more than enough to warrant a crack at the victor.

Stipe Miocic vs. Matt Mitrione-Rob Broughton winner: Miocic survived a harrowing encounter with the fists and feet of Muay Thai specialist Shane del Rosario, as he secured a second-round stoppage via ground-and-pound. Fighting a losing battle on the feet, Miocic wisely turned to his wrestling in round two, employed his heavy top game and unleashed a hellacious barrage of ground-and-pound that del Rosario could not withstand. Still rough around the edges, Miocic could benefit from further seasoning. Perhaps Mitrione could test him standing. Maybe Broughton could try him in the clinch or on the ground. Those two men will collide at UFC on Fox 4 on Aug. 4 in Los Angeles. Throw Miocic the winner.

Glover Teixeira vs. James Te Huna-Brandon Vera winner: Teixeira could not have impressed more in his promotional debut. He wiped out American Kickboxing Academy representative Kyle Kingsbury in less than two minutes, blasting him with punches before submitting him with an arm-triangle choke. A former Shooto champion, Teixeira has rattled off 15 consecutive victories and figures to move quickly in the UFC’s top-heavy 205-pound division. Vera will throw down with Te Huna, one of the heaviest hitters in the weight class, at UFC on Fuel TV 4 on July 11. Line up Teixeira with whichever man emerges with his hand raised.