Mishima, who entered to “Godzilla” theme music and his trademark back flip, carried his confidence into the ring.

The UFC veteran defended Kitada’s first takedown attempt and reversed it, landing in side control with a half nelson neck crank. Kitada (7-4-2) scrambled out from underneath his opponent and returned to his feet. When Mishima went for a double-leg takedown, the 2006 Deep Future King tournament winner capitalized, cinched a front choke and pulled guard. The hold appeared close to finishing Mishima, who later admitted it was “risky,” but he managed to escape and scored another takedown at the end of the round.

In the second period, Mishima stayed busy, scored with a takedown and settled for top position in half guard after trying for a leg lock. From there, he passed to side control and full mount before pounding away at Kitada and securing back control. Kitada tried to escape, but Mishima flattened him out, unleashed his ground-and-pound and forced the referee to stop the match 2:51 into round two.

Mishima (19-6-2) has won back-to-back bouts since his loss to world-ranked lightweight Kenny Florian at UFC Fight Night 9 in April 2007.

In women’s action, red-hot Japanese MMA star and Deep women’s lightweight champion Miku Matsumoto won her ninth straight fight, as she submitted Hikaru Shinohara with a first-round armbar in a non-title match. Matsumoto, who also submitted Shinohara (5-7) with an armbar the first time the two met in 2005, needed just 60 seconds this time. 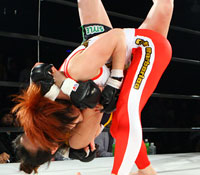 Daniel Herbertson/Sherdog.com
Miku Matsumoto throws Hikaru
Shinohara to the canvas.
Matsumoto (19-4) took the fight to Shinohara early and used a jab-hook combination to move to the clinch. From there, she delivered a beautiful hip toss takedown that sent Shinohara crashing to the mat. In side control, the champion worked the knee-on-belly position before spinning to a far-side armbar that ended the fight.

Meanwhile, Seigo Mizuguchi knocked out Ken Orihashi in the opening round of an open weight showdown.

Mizuguchi (4-4) started the fight with a punch, clinched in the corner and locked in a standing kimura, which he used to throw Orihashi to the ground. Later in the round, he threw a combination that cut Orihashi and necessitated an examination by the ringside doctor. After Orihashi was cleared to resume, Mizuguchi landed a left hook that dropped his opponent and followed up with some nice ground-and pound. Orihashi (4-5) returned to his feet, only to be sent back to the canvas for good by a second left hook from Mizuguchi 3:31 into round one.

Elsewhere, Deep used its unusual system of drawing random matchups out of a pool of eight fighters for the Protect bantamweight tournament. All four bouts ended in unanimous decisions.

In the first of four quarter-final matchups, Tomohiko Hori toppled Toshihiro Shimizu. During the match, Hori (7-3-3) kept his opponent on the defensive with a heel hook submission attempt, takedowns and ground-and-pound. The victory was Hori’s first since March.

The tournament’s second bout saw the Mohawk-sporting Isao Terada outstrike Masaki Yokoyama en route to a decision. Terada (5-6-4) used the two rounds to punish his foe with kicks, left hooks, overhand rights and knees in the clinch. The victory ended a three-fight winless streak for Terada.

In another tournament quarter-final, Seiji Akao used a beautiful suplex to slam Tatsumitsu Wada and take control of their match. Throughout the fast-paced bout, Akao utilized various takedowns and controlled the winless Wada (0-5) from top position. Judges sided with Akao (5-1), who has rattled off five consecutive victories since losing his professional debut in 2007.

Finally, Toru Harai advanced to the bantamweight tournament semi-finals with a decision win against Ippo Watanuki. Harai (6-2) threatened his opponent three times with a rear-naked choke, only to be denied a finish. However, he used his superior grappling skills to neutralize Watanuki (7-7-2) on the way to his third victory in as many fights.