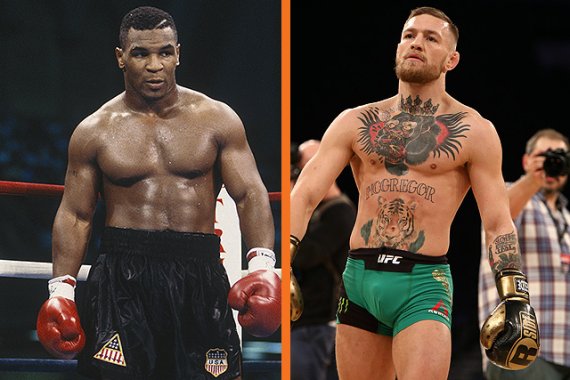 
Editor’s note: The views and opinions expressed below are those of the author and do not necessarily reflect the views of Sherdog.com, its affiliates and sponsors or its parent company, Evolve Media.

Like playing with a hot flame, the closer one gets to the incandescent heat of mega-stardom, the more unpredictable the results can be. Fame and violence can be tricky things, especially when they are mixed together. Case in point: the ”Notorious” one, the Ultimate Fighting Championship’s first simultaneous two-division champion, moonlight boxing foil for Floyd Mayweather and MMA’s most iridescent celebrity, one Conor McGregor.

Like Mike Tyson in his prime, McGregor eclipsed his sport with a mix of bravado, explosive fighting style and a level of trash talk delivered by only the greats of all time. Also, like Tyson, he brought enough bite to back up his prodigious bark. While no one in the UFC will ever go 37-0 with 33 knockouts a la Tyson, McGregor had still vanquished the best the 145 and 155-pound divisions had to offer. On the night of Nov. 12, 2016, he redefined MMA greatness, destroying Eddie Alvarez to take his second championship belt.

Since then, his career arc has been a little different:

• April 6, 2018: arrested in Brooklyn for attacking a rival’s bus prior to UFC 223; wiped out almost half of the PPV card in one fell stroke.
• Oct. 6, 2018: fourth-round stoppage vs. Khabib Nurmagomedov in a completely one-sided mauling -- the most helpless he’s looked in longer than anyone can remember.
• Oct. 6, 2018: after the fight, participated in one of the ugliest post-fight brawls in UFC history, resulting in a six-month suspension. While McGregor didn’t throw the first punch, he certainly created the environment with his way-over-the-line trash talk leading up to the scrum. It’s one thing to talk a little smack; it’s another to go after a fighter’s family and religion.
• March 11, 2019: arrested a second time for smashing a fan’s phone outside the Fontainebleau in Miami. It’s a good thing the fan merely wanted to take a photo; if he wasn’t a fan and said something less innocuous than, “Hey, could you take a photo with me?” McGregor may well have thrown both the phone and the fan into Biscayne Bay.

We’ve now reached the point of no return, or exactly the rarified air Mike Tyson found -- a place where no matter what the news is, people just shrug and accept it. Bit an ear off inside the ring? Sure. Threw hand dolly at a rival’s bus with fighters inside? OK, why not? The problem is, once you’ve reached this place, it is very hard to maintain peak performance when the bell rings. Tyson stumbled in spectacular fashion as a 42-1 favorite over journeyman James "Buster" Douglas on Feb. 11, 1990 and never united the heavyweight titles again.

Similarly, after riding a 15-fight win streak dating back to 2011, McGregor has now lost two of his last four fights, with the recent Nurmagomedov melee being the biggest humiliation of his career. Not only has he lost his air of invincibility, that fight exposed the chasm that now exists between him and those belts he used to wear. There are murmurs of a rematch when Nurmagomedov’s suspension ends this fall, but it seems likely McGregor will fight in July. And besides, what in their first fight would give anyone reason to believe a second chance and 25 more minutes in the Octagon would produce a vastly different result?

Additionally, Tyson’s game noticeably slipped after losing his trainers, and it seems that might be happening to McGregor now. Tyson first lost his talisman & trainer, Cus D’Amato, and by 1988 had also parted ways with longtime trainer Kevin Rooney, the man many credit for honing Tyson’s unique style. Tyson’s ring discipline quickly followed Rooney out the door, setting him up for that spectacular fall against Douglas and thereafter. And sure enough, whispers are now stirring around McGregor that his longtime trainer, SBG Ireland head coach John Kavanagh, may be leaving the circle. Kavanagh openly stated a few months after UFC 229 that he was hesitant to continue training McGregor. It’s not clear if the two have even spoken since October, and it remains to be seen how serious the rift is. Certainly it’s something to monitor as McGregor gets closer to returning to the Octagon.

As with Tyson, McGregor’s out-of-the-ring problems seem to be mostly self-inflicted. Fame and overconfidence can take down even the steadiest of competitors, and like Tyson, McGregor may not have been all that steady to begin with. The other harsh reality of these inordinate levels of fame is, once you succumb to the burning lights, it’s almost impossible to recover. Andre Agassi passed though the fire and, incredibly, carved out a long second life. Alex Rodriguez had several good years with the Yankees, but never again competed for an MVP following the tabloid scandals and subsequent steroid controversy of 2009. Only time will tell whether Jon Jones’ second title reign will remain unblemished by the personal and professional missteps that derailed his first. As good as Jones has been inside the Octagon, however, he can’t approach McGregor’s level of fame or the intense pressure that comes along with it.

Granted, McGregor has yet to be convicted of rape and has yet to serve three years in prison, a la “Kid Dynamite.” He has yet to bite another man’s ear off during a match, and at 30 he has several years of peak performance still remaining -- if he can avoid the pitfalls that seem to be more prevalent in his life as his level of fame continues to soar. But attacking buses, instigating fights outside the ring and getting arrested multiple times sure don’t inspire confidence he’s handling the light that much differently than the mercurial boxer who soared to unparalleled levels of fame 30 years before him.

McGregor will certainly earn tens of millions more dollars, pack arenas and blow up pay-per-views, but the odds he wraps another belt around his waist -- especially with a prime Nurmagomedov still in the lightweight division -- seem longer than the general public might believe. More likely, his fights will become entertainment spectacles and his antics will increase in their outrageousness. McGregor the cartoon character will be more recognizable than McGregor the contender. And with each arrest, his career path will bring up more memories of Mike Tyson and the perils that come with uncharted notoriety and wanton recklessness. Fame and violence can be tricky things.