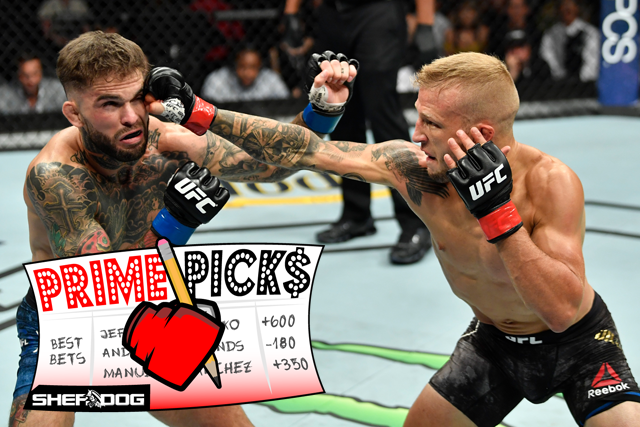 You can sign up for a free seven-day trial of ESPN+ right here, and you can then stream UFC on ESPN+ 1 live on your computer, phone, tablet or streaming device via the ESPN app.

The New Year is upon us, and the first Ultimate Fighting Championship event of 2019 is the promotion’s long-awaited debut on ESPN. UFC Fight Night 143 takes place this Saturday at Barclays Center in Brooklyn, New York, and the world’s leading mixed martial arts organization has put together a very solid card for its debut on “The Worldwide Leader in Sports.” Odds are available for all 13 bouts on the card, and below are my favorite plays in the UFC Fight Night 143 edition of Prime Picks.

In the main event, I believe Dillashaw will defeat Henry Cejudo and become the new UFC flyweight champion. As long as he can safely make weight, I believe Dillashaw should be able to soundly beat Cejudo and become a rare double champion. Dillashaw (16-3) has a 12-3 record in the UFC, and he’s fought and defeated many of the top bantamweights in the world. Dillashaw is riding a wave of confidence right now as he’s coming off of back-to-back KO wins over Cody Garbrandt and he’ll look to continue the good times with a win over Cejudo. While Dillashaw came into the UFC as primarily a grappler, he’s turned into one of the most devastating knockout artists at 135 over the years and he’s extremely dangerous on the feet. That being said, it will be interesting to see how he looks at flyweight. Cejudo (13-2) pulled off the upset of 2018 with his split decision victory over Demetrious Johnson to win the flyweight belt, and overall he has a 7-2 record in the UFC. But we have seen him get knocked out before, and that’s obviously what Dillashaw plans on doing to him here as well. Though Cejudo has solid boxing fundamentals, he lacks the fight-ending power that Dillashaw has, and he doesn’t have the kicking game his opponent has. Dillashaw should be the bigger fighter here and he’s the far better striker. I believe Cejudo will struggle to get takedowns in this fight, and Dillashaw should have a huge advantage on the feet. Give me Dillashaw at -200 odds.

Another small favorite who I like to get their hand raised is Neal, who will fight Belal Muhammad in a fun welterweight bout that’s flying under the radar. I believe Neal is one of the most impressive young welterweights in the UFC, and 2019 is poised to be a big year for him. Neal (10-2) is currently riding a four-fight win streak and has won both of his fights in the Octagon by stoppage. His last victory, a brutal head kick KO over Frank Camacho, showed just how dangerous he is. In the last five years, Neal is 8-1 with his only loss coming against Kevin Holland, who is a much bigger fighter. Against fighters his own size, Neal has pretty much been dominant. Muhammad (14-2) has also looked good in the UFC, carrying a 5-2 record overall in the promotion including his current four-fight win streak. But he’s mostly been edging out decisions, and that may not work against a guy like Neal, who finishes fights. I’m also worried about Muhammad’s chin, as he was destroyed by Vicente Luque in what I believe is a similar matchup to Neal. Muhammad is a good fighter, but I believe Neal is on a whole other level. Give me Neal all day here at -170.

For the parlay bettors, lightweight Gillespie should be able to make easy work of Yancy Medeiros. It seems like most early bettors agree, as Gillespie opened as a -230 favorite only to be steamed to what is now a -525 line. Even at that high number I still think he’s a good bet to add to a parlay because I don’t see him losing this fight. Gillespie (12-0) has looked incredible since signing with the UFC in 2016, going 5-0 with four finishes, including an arm-triangle choke over Vinc Pichel in his last fight. He’s shown a dominant wrestling base in the UFC and has proven he can finish fights with both his striking and ground game. I am very high on Gillespie and believe he can make a run for the lightweight title in 2019. It all starts with this fight. Medeiros (15-5, 1 NC) is 6-5, 1 NC in the UFC and has shown he’s an exciting fighter, but also one who is very beatable. He has five finishes of his own in the UFC, but he’s been finished four times himself, including a TKO loss to Donald Cerrone in his last outing. I see Gillespie landing takedowns at will in this fight, beating Medeiros up on the mat and probably getting the finish. A -525 is steep but it’s justified, and Gillespie is a good play for parlay bettors.

There aren’t a ton of underdogs who stand out to me on this card, but one who I do think could win is Bermudez, who takes on Te Edwards in lightweight tussle. Bermudez (16-9) is riding a four-fight losing skid, but you have to keep in mind he’s lost three straight split decisions, and all to quality fighters. It’s one of those situations where I don’t believe he’s been performing as poorly as his recent record indicates. All-time, Bermudez has a winning record in the UFC at 9-7 and while he might not be a top contender anymore, I’m not yet ready to say his career in the UFC is done just yet, and I believe he can beat Edwards and win this fight. For me, the key for Bermudez is his experience, something which Edwards lacks. Edwards (6-2) looked great on the Contender Series, but his UFC debut was a major flop as he was destroyed by Don Madge. He’s flashed knockout power on the regional circuit, but only against lower-level competition. Bermudez doesn’t have the strongest chin, but the only guys who put his lights out in the UFC were Jeremy Stephens and Chan Sung Jung, and I don’t believe Edwards is at their level. At +115 underdog odds, I believe there’s enough value on Bermudez to take him here for the small upset.

Adam Martin is a mixed martial arts journalist who has been covering the sport since 2011. He is currently the lead odds analyst for Sherdog.com as well as the lead staff writer for MMAOddsbreaker.com. Adam is also the co-host of “The Parting Shot Podcast” on iTunes. His favorite fight of all time is Dan Henderson vs. Shogun Rua and he wishes Pride never died. Adam is based out of Toronto, Ontario, Canada, and he is a graduate of the University of Toronto and Centennial College. Get in touch with him on Twitter @MMAdamMartin.