The Octagon returns to the UK for another round of caged-in, hand-to-hand combat at UFC 89 “Bisping vs. Leben” this Saturday at the National Indoor Arena in Birmingham, England. The event will be carried on tape delay by Spike TV and should provide a solid night of action. The featured bout pits local hero Michael Bisping against Chris Leben in what promises to be a memorable middleweight duel.

Who wins? Sherdog.com polled a number of professional fighters and trainers, seeking their opinions on the UFC 89 main event.

Din Thomas: I like the Bisping/Leben matchup a lot. They both constantly come forward, so it should make for an exciting fight. They both have good chins, so I think this one will be a long war. The deciding factor will be the English crowd. I don’t think Bisping will allow himself to lose at home. Bisping by decision.

Jaime Fletcher: Leben over Bisping. I think Chris has been working on his game. He’s a southpaw, and the harder you hit him, the harder he hits you. And he can take tons of abuse. It should be a good, exciting fight because “The Count” is not a punk by any means.

Nate Quarry: I see Leben KOing Bisping. Bisping’s only chance is to get the takedown and wet blanket him or a cut and referee stoppage. 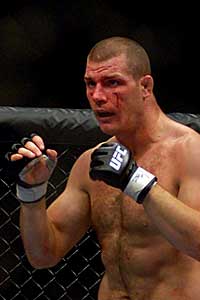 Photo by Sherdog.com
The pros predict a tough
night for the hometown hero.
Eddy Millis: Bisping is a good guy. Bisping by KO [via] punch, round two.

Crafton Wallace: [We] haven’t seen Bisping’s chin tested yet, and Leben’s is iron. I like Leben by KO in the third round.

Travis Wiuff: Tough fight to predict. Both [are] very tough guys. I will take Bisping by a close decision [because] he has looked much better at 185.

Pete Sell: On paper, I would say Bisping. He has the crisper stand-up, but Leben has proven that wrong before, so I’m going with Leben by KO.

Mark Selbee: Clearly Michael “The Count” Bisping is the more athletic, well-rounded fighter. But, man, I do love Leben’s do-or-die attitude. Chris Leben just loves to stand in the pocket and trade bombs. If Bisping fights smart, KO in the second.

Rory Markham: I like Bisping. [He’s] never been KOed and should outlast Leben for a three-round exciting decision.

Clay Guida: Leben by decision over the most overrated TUF winner in UFC history in Bisping.

Jens Pulver: I gotta go with Leben. I am out here at AMC [Kickboxing and Pankration] and have seen the last few days of training. He is in great shape. Love to see a KO.

Alan Belcher: Leben could KO Bisping if he can hit him. Bisping will probably counter and move; he can’t KO Chris. Bisping will score a few takedowns and take the decision.

Johny Hendricks: I will have to go with Chris this time. He has been in more fights with tougher guys, and he can hit really hard. Michael I don’t think has had his chin tested yet. I think Chris will win because he likes to stay in the pocket for the most part, and Michael doesn’t have the punching power Chris has, I don’t think. And Michael doesn’t have too good of a ground [game] to make Chris worry, so Chris wins.

Rob Kimmons: My prediction is Leben by knockout. I think that dude is a beast. You can’t knock him out, and every time he’s hurt, he’s more dangerous. I think it’s going to be a good fight, but I think he’s going to win by knockout.

Jeff Monson: I want to put a little asterisk next to this, because I’m not the best predictor of fights. I see Bisping winning this fight by decision by controlling Leben on the ground a little bit. I see him bringing him down and riding out a decision. Leben could knock out Bisping, but Bisping’s not knocking out Leben. I see Bisping winning a three round-decision in this one.