With Saturday’s cringe-worthy knockout at the resurrected hands of Mauricio “Shogun” Rua, Chuck Liddell is likely the latest in a line of mixed martial arts athletes who chose to age before our eyes rather than go out on a high note. If that sounds like snotty criticism, it’s not. That Liddell loves his profession to the point of risking his well-being says a lot about the integrity of the sport’s participants.

I don’t look at Liddell as a man who dropped four of his last five fights; I see him as a great UFC champion who was absolutely vicious in his prime, as well as someone who helped elevate the competition (wrestlers couldn’t take Liddell down, so they’d better damn well learn how to strike). He performed at exactly the level the sport needed at the time -- an explosive, exciting boogeyman for the media.

There is no “right” or “wrong” way to exit a career, and dropping bouts is the only way to discover you no longer have it. There have been few select fighters who chose to exit the Octagon while still feared, still dangerous and still winning. I’d call it an admirable display of restraint, but in most cases, it was just about money. And the Octagon qualifier is important: There are virtually no fighters who walk away from the industry at their peak.

Any sizable check Frank Shamrock has earned in the past decade -- or will ever earn -- can be attributed to his burst of activity in the Octagon, a sprint of next-generation performance that only lasted 18 months but fueled his ego for the next decade.

He crushed -- crushed -- Igor Zinoviev and Kevin Jackson. He avenged a loss to John Lober with an extended-play beating. As a finale, he weathered the fatiguing muscle of Tito Ortiz for the biggest fairy-tale finish of anyone’s UFC tenure. This is how you go out. 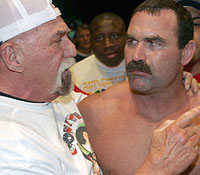 Todd Hester/Sherdog.com
Don Frye was legit.
A generation earlier, the only thing that separated Don Frye from UFC history -- a perfect 11-0 record -- was zoo escapee Mark Coleman, a UFC 10 finalist who punched Frye in the face with such volume that he needed surgery afterward.

A blemish, yes, but one that Frye suffocated brilliantly with a performance in the Ultimate Ultimate 1996, still one of the most exciting nights of MMA ever recorded. In a single evening, Frye exhausted Gary Goodridge, beat Mark Hall (in fairness, a fight long alleged to be fishy) and had an incendiary final with David "Tank" Abbott, surviving some early brutality to pull out the submission victory.

Frye was an early UFC completist -- a boxer/wrestler with no understanding at all of the word “quit.” Save for Coleman, he found no match in the cage and departed on the heels of the promotion’s most successful tournament. He reaped the rewards in Japan as a highly paid professional wrestler with bragging rights to spare.

Now there’s the contemporary pragmatic: Roger Huerta. Granted, his last fight was 15 minutes of futility against a smothering Kenny Florian, but Huerta, with one fight left on his contract, is one of the very few athletes willing to pursue other options while his body is still fight-cooperative. He turned down a UFC contract extension in order to pursue acting, and given the track record of athletes-turned-actors, this is perhaps the bravest thing he’s done to date.

The Florian loss aside -- and there’s little shame in that blemish -- Huerta has tremendous opportunities in the UFC’s Spanish-speaking markets. He could be walking away at a time most fighters would be ready to sign in blood. The fans will chastise him for it. Because fans are bitter over not seeing him wear out his body for the next decade, Huerta will be -- already is -- victim to sour grapes. It’s not possible to make a choice that satisfies the crowd. Leave too soon and you’re accused of running scared or being a sell-out; leave too late and you’re dismissed as a punchy goon who doesn’t know when to quit.

The audience too conflicted, management too financially invested, the talk usually turns to making that decision in the gym, not the ring. But it was never really Liddell’s decision, or Dana White’s. The sport decides when you’re done. And Saturday, the sport decided it had outgrown Chuck Liddell.