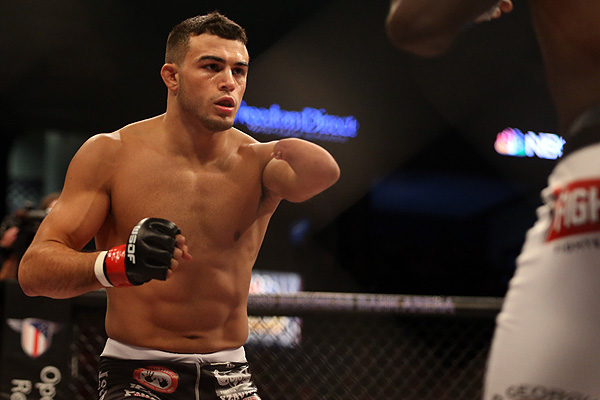 Nick Newell will put his unblemished record on the line at WSOF 7. | Photo: Dave Mandel/Sherdog.com


Undefeated lightweight Nick Newell has drawn the attention of the MMA community, not only with his 10-0 record but by the fact that he is a congenital amputee, with his left arm ending just below the elbow. To say he has had an uphill battle would be a laughable understatement.

Newell has worked hard to master the skills that are trying enough for athletes without physical limitations, all while facing a struggle to find opponents who were willing to fight him. He was also confronted by a challenge familiar to his peers: it is difficult to train full-time while pursuing a consistent source of income outside of mixed martial arts. For a number of years, Newell put his communications degree to use as a master control operator for the History Channel.

His work ethic paid off in MMA, too, as he graduated to Xtreme Fighting Championships in 2011 and later captured the Florida promotion’s lightweight championships. Rather than defend the regional title, Newell chose to sign with the World Series of Fighting.

“I’m kind of over the XFC thing,” said Newell, who meets Sabah Fadai at WSOF 7 -- the prelims for which will stream live to Sherdog.com -- on Saturday at the PNE Agrodome in Vancouver, British Columbia, Canada. “I hold no ill will toward them, but all their recent challengers have had less experience. I wanted fighters with more experience. Obviously, they weren’t happy, but I have to do what’s best for me and my career.

“WSOF: it’s a level up, a step up for my career, and you can’t beat the exposure that comes with being on national TV,” he added. “WSOF pays me well enough that I don’t have to have another job. Now I make enough money to be a full-time fighter, not worry about any distractions and follow my dreams.” 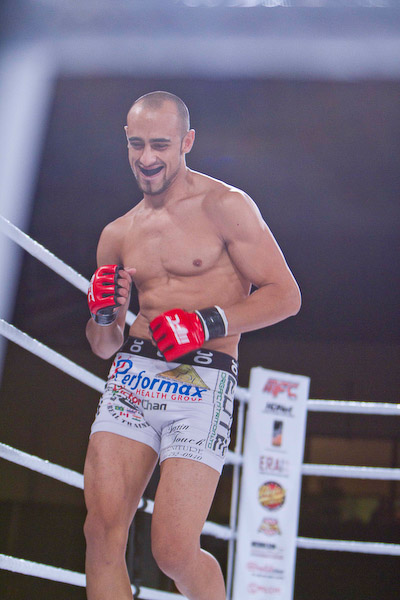 Photo: Jacob Bos/Sherdog.com
Fadai owns a 7-2 mark.
World Series of Fighting President Ray Sefo was intrigued by Newell’s potential, calling him “an incredible individual who exemplifies the sheer strength of the human spirit and the kind of courage and determination that martial arts embodies.” As one might suspect, Newell does not agree with those who believe he is at a disadvantage because of his congenital amputation.

“I’m as vulnerable to [being knocked out] as everyone else, but I’m actually pretty good at blocking, a lot better than people think,” he said. “Obviously, anything can happen. I can get kicked in the head or hit with an overhand like anyone else, but I have good footwork and a lot of head movement and that keeps me out of trouble.”

“Every once in a while, I train with ATT, but Jeremy has been my head coach since day one,” Newell said. “He does a great job with me, and I wouldn’t be anywhere without him. I go to Ramos for conditioning. Matt is really smart. He’s put together great routines for me, to be stronger and more explosive. I get better after every session: faster, stronger and I can do new things every week.”

It initially took the Newell story time to gain traction, as his first several bouts were against inexperienced foes, some with losing records. However, he has since demonstrated his capabilities against higher-caliber opposition. Newell has finished nine of his first 10 opponents, nine of them inside the first round. He made his promotional debut at WSOF 4 in August, when he took care of Keon Caldwell with a guillotine choke in a little more than two minutes.

In Fadai, Newell faces a Maximum Fighting Championship veteran who has not lost since 2007.

“Fadai is dangerous,” he said. “He hits hard, has some brutal knockouts, has a nice double-leg and he’s never been submitted. I see a unique test, unlike anyone I’ve ever fought before. He seems like he is a good technician, more so than a physical fighter. He’s very technically sound and very calm, and he’s going to be hungry. This is a big opportunity to make a name for himself. I’ve already fought for WSOF, and I’ve built a good audience. If he can be the first one to beat me, he can gain an audience for himself.”

Though Sefo has not approached Newell about the possibility of fighting for a World Series of Fighting title, Newell would welcome the chance.

“No, he hasn’t said anything to me about fighting for the title, but if the opportunity came, I definitely would take it,” Newell said. “There are a lot of good 155ers in WSOF, but I’m here to be the best. I think I’m the best lightweight in WSOF, and I’m willing to prove it. I’ll fight anyone.