SANTA YNEZ, Calif. -- Behind the strength of his grappling skills, Wilson Reis outworked Abel Cullum to win the vacant bantamweight strap in front of a capacity crowd at the Chumash Casino Resort. The eighth installment of ShoXC “Elite Challenger Series” aired live on Showtime.

Reis had to use every bit of his ground game to control the scrappy Cullum, who seemingly had an escape for every submission attempt Reis threw at him.

“I tried side chokes, I tried taking his back,” said an exhausted Reis afterward. “He has good strength.”

Cullum demonstrated excellent grappling of his own and landed most of the few strikes that were thrown in the fight. Yet Reis was able to get the takedowns, which in the end paid off for him in the eyes of the judges.

Team Oyama’s Shane Del Rosario remained unbeaten against Carl Seumanutafa via TKO at the 1:07 mark of the second round.

Del Rosario looked to finish Seumanutafa in the first with a deep triangle choke, but the tough San Francisco-based fighter miraculously slipped out. Seumanutafa then caught Del Rosario off guard and was able to transition to an armbar, but Del Rosario fended him off.

In the second round, Del Rosario sprawled out of two takedown attempts, the second of which left Seumanutafa stranded on his knees long enough for Del Rosario to unload two hard knees to the body.

Seumanutafa quickly stood up only to be put back down by a left hook. Del Rosario followed Seumanutafa down and dropped two more shots before referee John Schorle stepped in and stopped the fight. 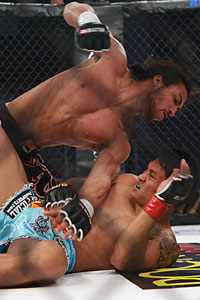 Dave Mandel/Sherdog.com
David Douglas (top) stopped Malaipet
Team Diamond with punches at 2:51
of the third round.
David “Tarzan” Douglas spent every bit of energy he had, but it paid off as he won a TKO victory over Malaipet Team Diamond at 2:51 of the third round in what was clearly the fight of the night.

It was an action-packed affair from the outset, as Douglas immediately scored via ground-and-pound after choosing not to stand with the muay Thai specialist. However, Malaipet showed improvement with his ground game and managed to sweep Douglas onto his back. Malaipet then fought off a triangle attempt and was able to get the fight back to its feet. Malaipet began unloading hard kicks to Douglas’ legs, and one sent Douglas sprawling backward and onto his back.

In the second, and with his legs no doubt in pain, Douglas tried to get the bout back to the ground but Malaipet kept it standing, where he continued to land the low kicks mixed in with effective combinations.

The final round began with Malaipet attempting a flying knee but Douglas caught him and put him on his back where he began again with the ground-and-pound. Eventually, Douglas moved to full mount and unloaded with a flurry of hammerfists. Though they didn’t appear to have much heat on them, Malaipet did little to improve position and referee Jason Herzog stepped in to stop the bout.

Jaime Jara edged out a split decision over Team Oyama’s Giva Santana by the scores of 29-28 on two of the judges’ cards, with the other 29-28 for Santana.

Jara was controlled on the ground for most of the first round by ground specialist Santana, who has won 10 of his 11 fights by armbar.

In the second set, Team Carnage’s Jara was able to force Santana to fight on his feet.

After splitting the first two rounds, the third could have gone either way. Santana landed more effective shots to counter Jara’s aggressiveness and even managed to cut Jara under his left eye with a right hand. Two of the three judges were more impressed with Jara’s constant pressure and handed him the victory. 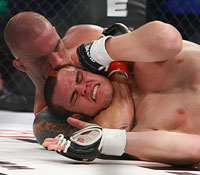 Dave Mandel/Sherdog.com
Erik Apple submits Matt Makowski
with a rear-naked choke.
Erik Apple submitted Matt Makowski with a rear-naked choke at 2:04 of the second round. Apple controlled Makowski from the top for most of the first round, landing hard body shots while attempting to lock in the kimura. Makowski fought it off and tried to counter with an armbar but the round ended.

In the second set, Apple took the fight down after landing a kick to Makowski’s body and almost landed in a guillotine choke. Apple fended off the submission attempt and began dropping shots until he managed to pass Makowski’s guard. Makowski gave up his back and Apple was able to sink in the deciding choke.

Scott Lighty, who hails from John Hackleman’s The Pit, won a hard-earned TKO over Jamiah Williamson at 4:51 of the first round. Despite getting stalked by the aggressive Williamson at the start of the fight, Lighty got the best of the standup exchanges. After a brief moment on the ground that saw Lighty pass Williamson’s guard and then take his back, Williamson managed to buck Lighty off and get the fight back up. It was the beginning of the end for Williamson, as Lighty landed a kick that had Williamson bent over in pain. Lighty landed a few more shots before referee Herzog stepped in to stop the contest.

In other bouts, Cesar Gracie-trained Damian Douglas needed just 46 seconds to sink in a guillotine choke on The Yard’s Joe Schilling, while Fernando Betega used a rear-naked choke to finish Mono Otero just 2:27 into the first round.

The Pit’s Luke Riddering won a TKO with his ground-and-pound efforts over John Corstophino at 3:44 of the first round, while Steve Gable earned a split decision over Josh McDonald. Scores were 29-28 twice for Gable and once for McDonald.