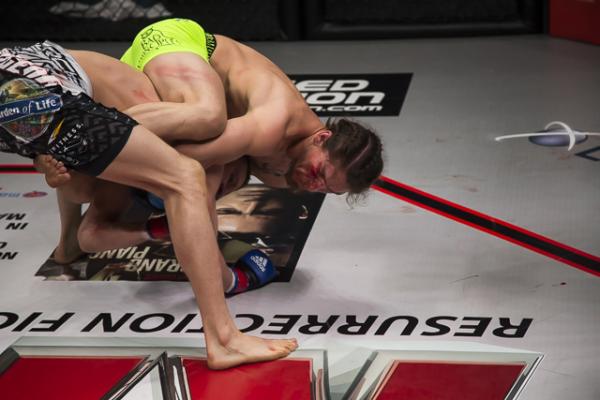 
Sometimes a professional mixed martial artist has to make a radical change if he or she wants to reach his or her potential. It may mean moving up or down in weight, changing coaches, adding new training partners or switching training camps.

For unbeaten featherweight prospect Luke Sanders, the decision to spend time training at the MMA Lab in Glendale, Ariz. -- in addition to the work he puts in at his home base of Nashville MMA in Tennessee -- was not easy to make, but it has paid major dividends so far in his career.

“One of my best friends moved to Arizona from Nashville for college,” said Sanders, who sports five finishes among his seven professional victories. “I visited him a couple of times, and when I got into the sport, I started looking at gyms out there so I could train while I was visiting him. I looked up [the MMA Lab], did some research and thought I should try the gym out. They have an awesome coaching staff and training partners, and I thought it was where I needed to be. I talked to [head trainer] John Crouch, and he said he’d be glad to have me. Ever since then, it’s been awesome.”

Crouch sees Sanders as a willing pupil, and while he would like Sanders to train in Arizona full-time, he understands his desire to return to Tennessee between stints at the MMA Lab.

“I do bug him every once in a while about coming out here full-time,” Crouch said. “He’s been out four times now. He’s a nice guy, and we love having him around. I’m always sad when it’s time for him to go home. It’d be great to have him here full-time, but sometimes, it’s just not possible. He has a daughter and a life in Tennessee and it’s not like they’re not doing good job with him [at Nashville MMA], but it’d be nice for him be here.”

The 28-year-old Sanders, who made his professional debut with a first-round technical knockout against Josh Jarvis on a Strikeforce Challengers card in January 2011, takes what he learns in Arizona and applies it to his training in Tennessee.

“
I would fight if nobody was
watching. There are some
guys who aren’t like that.

“I’ve learned so much out there, and it’s got me to the point where I can train on that level all the time,” Sanders said. “It definitely keeps me sharp and is like a second home. Every gym has its own bread-and-butter things and its own style, and by training in both places, I get to open up to them and grab everything. When I’m in Arizona, I get to put all I have into learning and focusing on getting better. Then I come home and enjoy the sport because it’s not nearly as intense. When I head to Arizona, it’s fight mode, and here [in Nashville], it’s more relaxed and I can try different stuff because I’m not rolling with total savages all day every day. I can work on things I learned out there.”

In Sanders’ most recent outing in March, he made his debut in the Resurrection Fighting Alliance organization and earned a unanimous decision over Dan Moret. After getting clipped in the first round, he won the final two rounds with a combination of clinches and takedowns to earn three 29-28 decisions on the judges’ scorecards, handing Moret his first professional loss in seven outings. Sanders will return to the cage on Aug. 22, when he faces Darrick Minner at RFA 17 in Sioux Falls, S.D.

“The first thing that always strikes me about him is his toughness,” Crouch said. “He’ll grind through anything. His mental toughness is what stands out to me. You aren’t going to break him no matter what.”

That mental toughness comes from a background of wrestling and competing in Toughman contests while still in high school. A native of Clarksville, Tenn., Sanders won a state wrestling championship while attending Montgomery Central High School; however, friends started him on the Toughman circuit.

“Where I grew up, I lived in an inner-city neighborhood and I had to learn how to take care of myself,” Sanders said. “What got me into fighting was mainly the wrestling thing, but my friends put me in a Toughman competition. They took me to the fair and told me we were going to hang out, but it’d been set up for me to compete in the Toughman contest. They didn’t tell me there was going to be a Toughman contest. After I won it, in the heat moment I thought I could fight and kept on doing it. I had to lie about my age. Ever since then, I figured out I could be good at things like that and I started pursuing and learning more about MMA. I’m a natural fighter. Some people are trained, but I’m more natural. I would fight if nobody was watching. There are some guys who aren’t like that.”

With stops in Strikeforce and the RFA already under his belt, Sanders recognizes the fact that he has gotten off to a great start.

“My career so far has been amazing,” he said. “I’m only 7-0, and I’ve gotten to fight on TV three times. I’ve gotten to fight for some big promotions. They haven’t been quite top-tier, but they’re still big. I couldn’t have asked for a better start to my career. I definitely feel like I’m on the right track. I want to be a champion and be one of the best.”

Crouch, who has trained former Ultimate Fighting Championship lightweight titleholder Benson Henderson for years, feels it is only a matter of time before Sanders gets a call from the UFC.

“Luke is really open-minded, easy to coach and wants to be great,” Crouch said. “He’s improved a lot and I think he could compete right now in the UFC with no problem. A couple of fights from now would be even better, but he’s ready to go now. Like any other fighter, he’s still young and has to learn and develop. However, he’s been in my gym with UFC guys, so he’s already competing at that level. I think he’s good to go. If they called us, he could be ready to go tomorrow.”