It was 30 seconds into the bout, and the choke looked tight.

Donald Cerrone squeezed the power guillotine, a modified technique resembling an upside-down rear-naked choke. In his first title fight, Benson Henderson had rushed in a bit prematurely. He appeared to be struggling to escape. There was gargling. But the fight wasn’t over.

“I was like, ‘Oh crap, that’s kind of tight. I have to defend now and get out of this,’” Henderson said of Cerrone’s first-round submission attempt. “The key is to turn your head in the right direction. You want to turn your chin where his arms are locking, are crossing. Turn your head, your chin towards the lock.”

As Henderson’s resilience developed into the theme of the fight, he broke free from a similar choke in the fourth round that had commentator Frank Mir convinced the end was near. Then in the fifth, Cerrone wrenched Henderson in a vicious omaplata/kimura hybrid, bending Henderson’s shoulder at such an angle it was almost difficult for the eye to accept.

“I wanted to have the fight like Rocky where I’m getting beat up and I come back,” Henderson said of the Oct. 10 tilt. “You have to be careful what you ask for. I got all that I asked for and a little more.”

The five-round interim lightweight title fight, the main event of WEC 43 in San Antonio, Texas, was an exemplary blend of technical subtlety, dramatic recovery and spirited pace. For those reasons and more, the fight is Sherdog’s Fight of the Year for 2009.

Despite being on the receiving end of offense in the fight’s most dramatic moments, Henderson won a unanimous judges’ nod, 48-47 across the board. That contrasted with Sherdog judges who gave rounds one, four and five to Cerrone. The verdict touched off hearty debate about the nature of mixed martial arts judging and what type of offense and position sways scorers, a maddeningly recurrent theme in 2009. 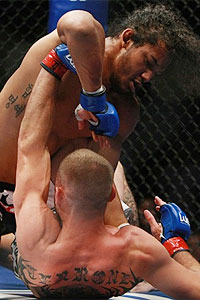 Dave Mandel/Sherdog.com
Sherdog.com's fight of the
year was an exciting affair.
If he too was surprised by the decision, Henderson did not get a chance to show it. “Smooth” had been so drained by a badly executed weight cut that he simply stopped perspiring halfway through the fight, glistening with sweat in the early rounds but dry as a bone by the final bell.

“As soon as the cameras got cut off and I left the cage, I collapsed,” Henderson recalled. “They had to carry me backstage. I literally couldn’t walk anymore.”

As Henderson received six bags of intravenous fluids, Cerrone took stock of the scrap in his hotel room with his girlfriend. He was due at an after-party, but wasn’t up for making the trek. He wasn’t down in the dumps -- a low-spirited Donald Cerrone is a comatose Donald Cerrone -- but had a feeling he’d, once again, not turned it up when the opportunity to win a fight presented itself.

Cerrone said his biggest fear in a fight is expending too much energy early, and then, exhausted, being a sitting duck for thorough punishment. He knew he had plenty of conditioning. But he had to remind himself of that instead of subconsciously trusting in it, which disrupted his in-ring flow.

Cerrone said the issue was illustrated in moments during the fight where Henderson stood crouched in his guard, out of submission range, and dropped punches at will, shots that looked to be a deciding factor for judges.

“I thought he was going to try to pass my guard and control position. … I didn’t think he was going to stand there,” Cerrone said of Henderson. “He was content with just staying there and, I guess you could say, just punching me in the mouth, you know? Just laying there, man, I just didn’t have it together.”

The fight sparked an evolution for Cerrone. Afterward, he sought out sports psychologist Brian Cain, who worked with Georges St. Pierre in helping him bounce back from his loss to Matt Serra in 2007.

“It’s something I’ve been meaning to do. … I hate this, these feelings and emotions you go through,” Cerrone said. “I come out all ‘blah,’ and at about the third round I start kicking it up. I’m trying to focus that energy on the beginning of the round, not so much at the end of the fight. Starting the fight like I end the fight.”

Cerrone bounced back against Ed Ratcliff at WEC 45, scoring a third-round submission win in a fight where he was anything but tentative. Trainer Greg Jackson said Cerrone had turned a corner when he came charging at Ratcliff right at the opening bell.

“In (the Henderson) fight he would start out OK, and then he would stop in a position and just kind of hangout and watch Ben throw punches at him,” Jackson said. “I was a little concerned, if you will, that we needed to get up and get going. I gave him some tough love in between each round. You could see him have moments of greatness, and then he would stop and I would have to get him going again.”

To be clear, the Henderson fight was not characterized by Cerrone’s shortcomings. As Frank Mir put it, Henderson put forth a textbook example of how to fight the wily and lanky lightweight, meshing even-headed perseverance with technical know-how to stay far away enough to dodge danger but still land shots.

“
I wanted to have the
fight like Rocky where
I’m getting beat up
and I come back.

”
-- Henderson on the fight of the year.


“I thought I won the first, second and third round, and I thought Donald kicked the crap out of me in the fourth and fifth,” Henderson said. “I hate going to a judges’ decision. I am so upset about that. … I rely too much on my athleticism and my flexibility. I need to get to the point where I don’t allow opponents to put me in a bad position so I don’t have to rely on athleticism.”

Both fighters had breakthrough years in 2009, each putting on several exciting fights that went a long way toward fortifying the WEC’s lightweight division as one worth paying mind. Among the fans both fighters gained: each other.

Cerrone said that as Henderson escaped his chokes and locks, he almost felt like he was watching from the stands.