As catastrophic meltdowns go, Three Mile Island had nothing on EliteXC this past Saturday night.

Nearing expiration of their initial CBS deal and multimillions in debt, their third network telecast carried with it an urgency that would strain anyone’s nerves. After the sophomore slump of their July show -- with viewership having fallen off by nearly 50 percent from the May installment -- headlining attractions Gina Carano and Kimbo Slice were expected to boost the promotion’s profile and provide investors some optimism for a prosperous 2009.

Then Dan Freeman had to butt in.

Freeman, whom Dave Meltzer of the Wrestling Observer reported was the warm-up aide for Ken Shamrock, accidentally drove his head into the brow of the main eventer, forcing open an old cut that required sutures. The resulting chaos -- with Elite officials scrambling to either find an opponent for Slice or simply expedite their collapse by tossing money into a bonfire -- probably caused a localized 3,000-percent spike in Excedrin sales near Florida’s BankAtlantic Center.

Their ultimate solution was to call in undercard athlete Seth Petruzelli, a journeyman heavyweight-turned-light-heavy that presented the worst possible blend of attributes for a Slice opponent: perfectly capable of winning, but virtually zero ability to capture even a fraction of the mass interest his hulking opponent attracts.

A grumpy Slice -- who appeared disinterested and even downright contentious at the idea promoters would have him fight someone with a chance of actually beating him -- was subsequently knocked silly in 14 seconds.

It didn’t end there: With each layer of misfortune, you can practically hear the rotations of the screw being twisted into Elite’s collective head. Not only was Slice throttled, it was by a short, clipping, unspectacular right cross. Twist. By a light heavyweight. Twist. Who had failed in the UFC. Twist.

If you needed any one reason why the choreographing Vince McMahon is a happy, smiling near-billionaire, this should do it. 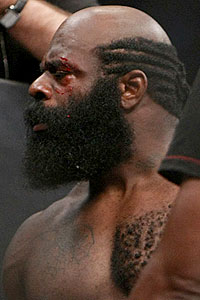 Dave Mandel/Sherdog.com
How bad will Kimbo's loss
hurt EliteXC?
As bad as it was, Slice’s unraveling is hardly the first time a promotion has suffered a battering of a star attraction. Chuck Liddell was ascending in popularity and poised to share UFC poster space with Tito Ortiz when Randy Couture used his head as a speed bag in 2003. Kazushi Sakuraba was close to deity status when Wanderlei Silva went David Beckham on his head on three separate occasions. And in the most relevant example, emerging UFC headliner Brock Lesnar put his rookie understanding of submission on public display, losing to Frank Mir in front of 650,000 viewers in February.

While Elite may find communal comfort in remembering those missteps, the variables that accompanied them had much to do with the promotion’s eventual recovery. The aging Couture spun off his own mythology that attracted a wide audience, and Liddell regained face with two vicious revenge knockouts. Looking like something out of a Frank Frazetta painting, the savage Silva became a Japanese icon. And Lesnar, though he lost quickly and definitively, battered Mir early on and left observers impressed with his developing skills.

Slice, meanwhile, was already battling criticism of his paper-tiger status, something his management reinforced by welcoming fights against relics like David “Tank” Abbott and Shamrock. Against even a middling fighter like Petruzelli, he experienced the most one-sided smashing possible.

If the closest comparison to Slice in terms of charisma is Mike Tyson, then it’s inevitable we look at Tyson’s loss to similarly unheralded James “Buster” Douglas in 1990. While not disposed of as economically as Slice, Tyson experienced a definitive loss -- yet it failed to put even a minor dent in his box office.

As with Tyson, people are drawn to Slice because they’re drawn to the idea of quick, sudden violence, not because of an unblemished record. So long as Slice can continue to deliver exciting bouts and his alley-cat charisma, it doesn’t appear likely fans will opt for desertion. (Really -- is there anyone who watched the CBS card that wouldn’t tune in to see Slice’s bid for redemption?)

The real issue is whether Elite will be granted the opportunity for some redemption of their own. If Slice is seen as having reduced marketability, it’s possible CBS will withdraw support of Elite’s efforts -- though any reasonably intelligent bean-counter would be wise to grant them a stay of execution until the numbers for Slice’s next fight are recorded.

“Slice’s next fight,” incidentally, is probably the most bile-inducing topic of conversation within company headquarters. A rematch with Petruzelli has an easy story behind it, and Slice would almost certainly have to look better than he did the first time, but it’s unlikely the psychological damage done would be easily overcome; worse, the lighter Petruzelli’s speed might never be countered. It’s a bout best left to a later date … though Tyson never did meet Douglas a second time.

Trying to reassemble the Shamrock fight is a pointless exercise, as Shamrock’s reputation for being brittle was carved into stone with the headbutt fiasco. (If Elite has any sense, they’ll throw Shamrock and Abbott into a cage, guaranteeing that at least one semi-marketable senior comes out with a win.)

That leaves promoters to decide a fight for Slice that isn’t seen as a desperate bit of sandbagging while at the same time removing some of the odds he’ll be bested by a deadly heavyweight. That short list includes Eric “Butterbean” Esch, Don Frye, Enson Inoue or Sean O’Haire.

None of those fights are boring, and all are credible victories for a 3-1 rookie -- which is, despite Slice’s notoriety and pay scale, all he is. No more, no less.

My left-field vote, though, goes to Oleg Taktarov, a notable ankle-cranker of the early UFCs who recently emerged from a 10-year retirement to score two victories. While he’s certainly a danger to Slice on the ground, Taktarov is famous for using his face to block punches. It’s an interesting contrast of style and ability -- striker vs. grappler, a pure and simple conflict that helped build the foundation for the sport.