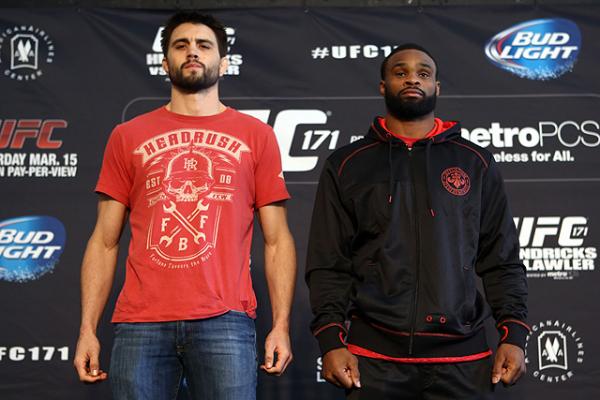 Carlos Condit understands the risks involved with an opponent like Tyron Woodley.

Condit will confront Woodley in the UFC 171 co-main event on Saturday at the American Airlines Center in Dallas, with the winner likely to emerge as the No. 1 contender for the Ultimate Fighting Championship welterweight crown. Despite recent knockouts against Josh Koscheck and Jay Hieron, Woodley has earned a reputation for grinding out victories with takedowns and a suffocating top game -- a strategy to which the “Natural Born Killer” has proven vulnerable in the past.

“That’s always an uphill battle,” Condit told Sherdog.com. “Whether the dude on bottom lands twice as many shots as the guy on top, in the judges’ eyes, most of the time the guy on top is seen to be winning. I’m just going to go in there and try and do my thing. I don’t expect to win a decision from my back, I’ll put it that way.”

Woodley has won two of his three fights since arriving in the UFC a little more than a year ago. A two-time NCAA All-American wrestler at the University of Missouri, the 31-year-old last appeared at UFC 167 in November, when he laid waste to Koscheck with first-round punches at the MGM Grand Garden Arena in Las Vegas.

“I think he’s going to come out and try to bring the heat,” Condit said. “He’s very explosive [and has] got great knockout power. I feel like if that doesn’t do it for him, most likely he’ll be looking to bring in other aspects of his game, [like] his wrestling and maybe his top game. I plan on getting out there and being able to give him a hard time in any situation.”

Condit and Woodley will have vested interests in the UFC 171 headliner, as Johny Hendricks and Robbie Lawler duke it out for the vacant welterweight title. Longtime champion Georges St. Pierre surrendered his belt in December, when he announced plans to take an indefinitely leave of absence. The future hall of famer’s decision was far from a bombshell for Condit, who lost a unanimous decision to St. Pierre in November 2012.

“Honestly, I wasn’t all that surprised,” he said. “There were rumors kind of floating around there for a little while. It was kind of something I saw on the horizon. I think a lot of people did.” 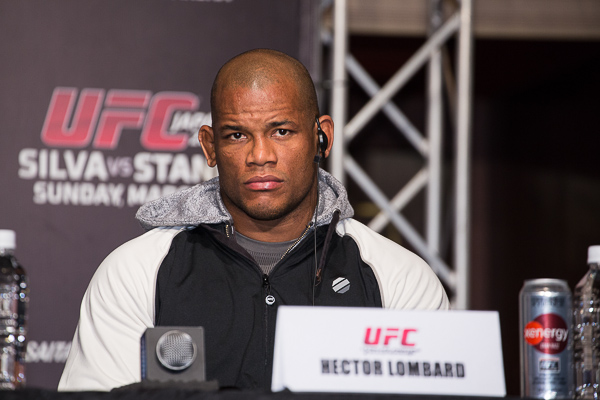 Photo: D. Mandel/Sherdog.com
Lombard prefers to stand.
Few mixed martial artists have enjoyed as much sustained success as Hector Lombard, a judo black belt and former Bellator MMA champion who owns a gaudy 26-2-1 record over his past 29 appearances.

The 36-year-old American Top Team export will look to further establish himself in the welterweight hierarchy when he tackles onetime Shooto, Strikeforce and EliteXC titleholder Jake Shields in a welterweight showcase at UFC 171. One of the sport’s most feared standup fighters, Lombard has secured more than half (19) of his 33 career victories by knockout or technical knockout, 15 of them inside one round. He made a successful first appearance at 170 pounds in October, when he needed a little less than two minutes to dispatch Nate Marquardt with punches at UFC 166.

In Shields, Lombard does not expect to find a willing participant.

“We all know that I want to keep it on the feet, and he knows that, as well,” the Cuban judoka told Sherdog.com. “I’m 100 percent sure that he wants to take me to the ground. It’s going to be hard for him. It’s going to be really hard.”


The Ultimate Fighting Championship has not staged an event in Dallas since UFC 103 nearly five years ago. Vitor Belfort and Rich Franklin were the headliners ... The American Airlines Center opened in July 2001 at a cost of $420 million and plays host to the NBA’s Dallas Mavericks and NHL’s Dallas Stars ... Hendricks was a four-time NCAA All-American wrestler and two-time national champion at Oklahoma State University. He still ranks sixth on the school’s all-time list for career wins with 126 ... Alliance MMA’s Myles Jury has finished 10 fights inside one round, including 12-, 48-, 49-, 57- and 69-second victories ... Ovince St. Preux graduated from the University of Tennessee with a degree in sociology ... At 21 years, 10 months and 13 days, American Top Team’s Justin Scoggins will be the youngest fighter on the UFC 171 roster ... Sean Strickland is one of eight men to have held the King of the Cage middleweight championship. Chris Brennan, Dean Lister, Joey Villasenor, Billy Ayash, Keith Berry, Brandon Hunt and Brad Burrick are the others ... When Jim Hettes was born on June 9, 1987, the top five movies at the domestic box office were “The Untouchables,” “Beverly Hills Cop II,” “Harry and the Hendersons,” “Ernest Goes to Camp” and “The Secret of My Success” ... The seven men to whom Rick Story has lost -- Mario Miranda, Nathan Coy, John Hathaway, Charlie Brenneman, Martin Kampmann, Demian Maia and Mike Pyle -- own a combined record of 127-41-1 ... Raquel Pennington made her professional MMA debut in March 2012 against Kim Couture, the ex-wife of UFC hall of famer Randy Couture ... Sean Spencer is 7-0 in bouts that reach the judges ... Ten of Francisco Trevino’s 11 career fights have taken place inside the South Texas Fighting Championships organization ... Former two-division Legacy Fighting Championship titleholder Daniel Pineda has delivered all 18 of his wins by knockout, technical knockout or submission.