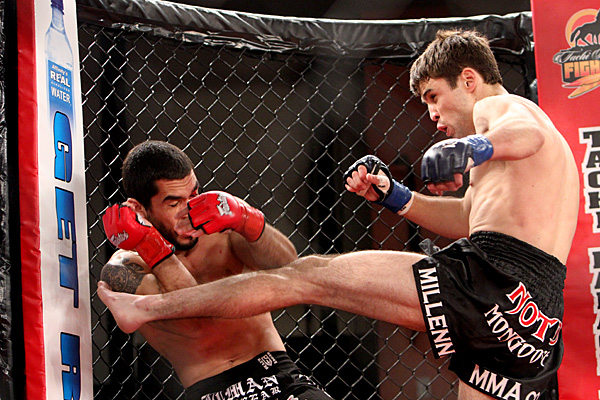 
LEMOORE, Calif. -- Friday night, it was high stakes for flyweights at Tachi Palace Fights 8, and it was two underdogs who had their hands raised.

Montague's superior footwork and head movement revealed a depth of striking ability that Gomez couldn't keep up with. The challenger effortlessly danced around the cage, switching stances and peppering the champ from the outside, lunging in with powerful body shots followed by combinations upstairs. 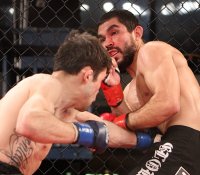 J. Sherwood
Montague smashed Gomez's body.
The grappling-minded Gomez stood flat-footed and circled away, looking for a chance to get the fight to the ground. However, "Useless" couldn't get his hands on Montague long enough to put him on the floor consistently. As the fight went on, the Millenia MMA product's crushing kicks to the legs and body of Gomez took away all of the strength that could've aided him in getting a takedown.

By the fifth round, “Useless” was barely a humorous nickname. Badly cut around his left eye, with severe bruising on his midsection and legs from Montague’s savage striking, Gomez simply circled aimlessly, while Montague, well ahead on the scorecards, danced around showboating.

So one-sided was the fight that when the 10-second clap sounded in the fifth round, "The Mongoose" thrust his hands up in victory, celebrating his title win well before the bout had ended. It was Montague's sixth straight win, as he moved to 9-1.

Da Silva owned the first round with his trademark back control. The Brazilian spent almost the whole round riding “Uncle Creepy’s” back with a tight body triangle locked in. However, after a tough start, the bout belonged to the Dana Point, Calif. fighter. 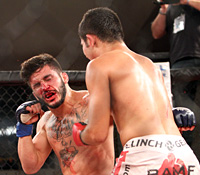 J. Sherwood
McCall knocked off top-ranked
Jussier "Formiga."
McCall, 26, used good clinch work and takedown defense to keep the fight standing, battering the Brazilian inside. When da Silva began to slow in the third, McCall turned it on, dancing in and out, landing punches to the head and body. The fatigued "Formiga" just couldn't keep up with McCall, who took 29-28 scorecards from judges Abe Belardo, Jackie Denkin and Jason McCoy. It's the first lost of Formiga's career, while McCall moves his pro mark to 9-2 with the W.

“I think I put on a show and deserve a title shot,” McCall told Sherdog.com after his upset of Formiga. “If they don’t give me one, whatever. I am number one.”

Tachi Palace entertainment coordinator Jeremy Luchau told Sherdog after the bout that Montague would likely defend his title at Tachi Palace Fights 10 in August. McCall is a likely challenger, though May 5's bout between Shooto star Mamoru Yamaguchi and Greg Jackson charge John Dodson may factor into the Tachi title equation. 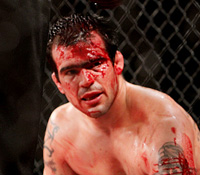 For four rounds, Loiseau-Serao was a dry affair, as Loiseau continously looked for a head kick on the feet with little success, while Serao would repeatedly shoot for a takedown, get stuffed, then pull guard. From there, Serao stunted any Loiseau offense by constantly going to rubber guard, controlling the Canadian's posture and not letting him get any ground-and-pound in. The lethargic pace of the fight led many at the Tachi to walk out before the bout's conclusion.

As the fifth and final round began, a cut appeared on the hairline of Serao. Loiseau saw blood and pounced.

"The Crow" quickly ripped into the champion with punches and elbows up against the fence that ripped the cut open, pouring blood all over Serao's face and chest. Referee John McCarthy quickly called for a cut check, and the cageside physician immediately waved off the fight, giving Loiseau the win and the TPF middleweight crown. It was the first win for the 31-year-old Montrealer since his thrashing at the hands of Mario Miranda at UFC 115 last June in Vancouver, British Columbia.

Oakland’s Dominique Robinson had the performance of his career, as the lightweight dominated three-time UFC veteran John Gunderson en route to a third-round stoppage. 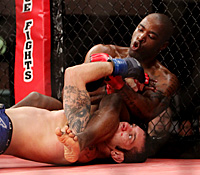 J. Sherwood
Dominique Robinson upset John
Gunderson in dominant fashion.
Robinson, 28, was superior everywhere to the sluggish Gunderson. On the feet, Robinson used his powerful right hand while shutting down Gunderson's repeated shot attempts. Robinson allowed his defensive wrestling to set up takedowns of his own on Gunderson, who he smashed with punches and elbows on top. The "Fallen Angel" even flexed his submission skills, threatening with an armbar late in the second round.

As the third round began, Gunderson was a spent force. He shot once more, but Robinson easily shut him down, quickly took full mount and blasting away until John McCarthy stepped in for the save 41 ticks into the third round.

The night was much kinder to two other UFC veterans, however. Brazilian Fabricio Camoes blew away fellow Octagon vet Steve Lopez in just 23 seconds, dismantling him with a right head kick and follow-up onslaught. The emphatic win earns Camoes a shot against "The Ultimate Fighter" Season 8 winner Efrain Escudero at Tachi Palace Fights 9 on May 5.

Elsewhere, welterweight Edgar Garcia looked for a guillotine early against Mike Moreno. The Yuma, Ariz., native did not find success initially, but as Moreno drove another double-leg attempt, Garcia locked up another choke and pulled guard, forcing the tap at just 1:47 of the first round.

Standing just 4-foot-11, featherweight Tyler Freeland outwrestled Diego Melendez for three three-minute rounds to win a unanimous decision in his pro debut. Freeland, who was born with hypochondroplasia, a form of short-limbed dwarfism, used superior strength and wrestling to put Melendez on the mat en route to unanimous verdict (30-27, 29-28, 29-28). 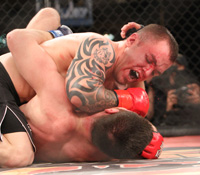 J. Sherwood
'Hulk Hands' outwrestled Melendez.
Doug Hunt punched out Andrew Martinez at 4:27 of the first round in their welterweight affair, battering the popular local from the turtle position until McCarthy intervened.

Middleweight Collin Hart needed just 92 seconds to take down Mike Arellano and tap him with a rear-naked choke, while Andy Miranda choked foe Ryan Burton out cold with a triangle just 66 seconds into their lightweight affair.

In the evening's welterweight opener, Kyle Griffin shot right into an Alan Jouban knee that knocked him out just 15 seconds into the fight.