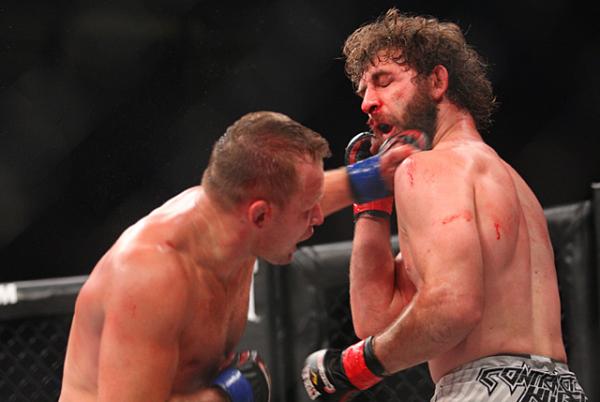 Backed by a multi-pronged standup attack, a seemingly endless gas tank and a series of late takedowns, Shlemenko retained his Bellator MMA middleweight championship with a unanimous decision over Cooper in the Bellator 98 main event on Saturday at the Mohegan Sun Arena in Uncasville, Conn. All three cageside judges scored it the same: 48-47 for Shlemenko (48-7, 9-1 Bellator), who has won 11 consecutive fights.

This one did not come easy. Cooper (19-9, 7-3 Bellator), who replaced the injured Doug Marshall on short notice, rocked the Russian champion twice in the first 10 minutes. A left hook did the damage in the first round, a right hook in the second. Shlemenko, who was also cut near his left eye, staggered but refused to blink.

The champion made his move in round three and then found another gear in the fourth, where he floored Cooper with a wicked left hook. Though he survived, the Reign MMA export never seemed to recover fully from the blow. Shlemenko punctuated his latest victory with three fifth-round takedowns. 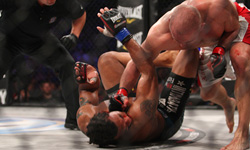 Rogers (10-6, 3-4) fought in bursts but faded noticeably after the first five minutes. Parlo mounted him in the second round and did a number on him in the third.

In the closing seconds of their encounter, the 23-year-old Dane tore into Rogers with a devastating knee strike against the cage, nearly knocking “The Predator” unconscious. Parlo trailed his wounded prey to the mat and unleashed a volley of standing-to-ground punches. The bell saved Rogers from a finish but could not save him from the scorecards.

The 29-year-old Rogers has lost three of his last four fights. 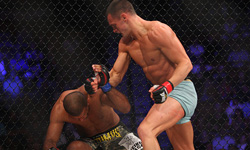 K. Mills
The slick-grappling Butcher turned to his
striking to stop the BJJ ace Santana.
Jason Butcher sent Team Oyama’s Giva Santana into retirement, as he stopped the Brazilian jiu-jitsu ace on second-round punches in the Season 9 middleweight tournament quarterfinals. Santana (18-3, 2-2 Bellator) succumbed to the blows 72 seconds into round two and afterward announced his decision to walk away from MMA at the age of 41.

Butcher (7-0, 4-0 Bellator) had no answer for the Brazilian on the ground in round one, as Santana struck for a takedown, passed his guard and grinded on him from top position before moving briefly to mount.

The Jorge Gurgel protégé defended well against the submission game of “The Arm Collector” and pushed the fight to a second round. There, Butcher turned to his striking. He wobbled Santana with a short right uppercut, floored him moments later and polished off the victory with strikes on the ground. 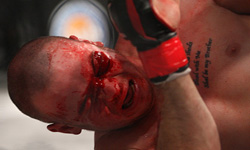 K. Mills
Torrey's left eye was a problem and Ward
viciously exploited it for the stoppage.
Brennan Ward battered, bloodied and put away Justin Torrey with second-round punches in the Season 9 middleweight tournament quarterfinals. A late replacement for Andreas Spang, Ward (7-1, 3-1 Bellator) drew the curtain 3:28 on his former sparring partner into round two.

Torrey (7-1, 2-1 Bellator) took charge in the first round, as he dodged an ill-advised heel hook, settled in guard and controlled his opponent with a heavy top game, ultimately mounting him in the closing seconds. However, his good work came with a price.

The punishment Torrey had absorbed during early standup and ground exchanges left him with a badly damaged left eye.

In the second round, Ward targeted and succeeded in rupturing the swelling. He tagged the bleeding Torrey with a straight right, bullied him to the ground and ruthlessly attacked the eye with short but effective hammerfists. Soon after, a series of unanswered blows forced the finish. 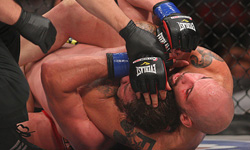 Kimball was in command at the start, as he mixed unorthodox kicks with sneaky punches and threw in four takedowns in the first round. In round two, Filkins sprawled on an attempted takedown, moved to full mount and forced his bearded adversary to surrender his back.

The New Hampshire-based middleweight let loose with winging punches in the closing seconds. Only the bell saved the defenseless Kimball.

With momentum clearly in his favor, Filkins (8-1, 2-0 Bellator) picked up where he left off in the third round. He struck for another takedown and transitioned between mount and Kimball’s back before locking down the choke. 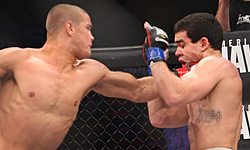 Photo: K.Mills/Sherdog.com
Anderson's jab was key to his victory.
A vigorous jab, well-timed punching combinations and an unshakable resolve carried undefeated Team Xplode MMA prospect Derek Anderson to the most significant win of his career, as he captured a unanimous decision over Patricky “Pitbull” Freire in a lightweight showcase. All three cageside judges scored it the same: 29-28 for Anderson (10-0, 1-0 Bellator).

Freire (10-5, 3-4 Bellator) nearly finished it in the first round. He staggered Anderson with a pair of left hooks, delivered a takedown, moved to full mount and transitioned from an armbar to a tight triangle choke.

The Californian slammed himself out of danger and escaped from Freire on the ground. From there, “Pitbull” faded.

Anderson turned the corner in round two, where he survived a clubbing right hand to the temple, kept Freire’s back to the cage and attacked from distance. The punches piled up for the Californian, his offense all set up by the jab. “Pitbull” wore a discouraged look over the last half of the fight, losing for the fourth time in five appearances.

“I wasn’t scared,” Anderson said. “I thought he was a perfect opponent. I’m just excited to be here.” 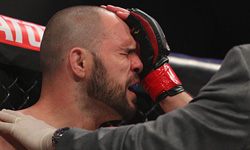 K. Mills
Nader unceremoniously suffered an errant
digit to the eye.
An inadvertent eye poke from Mitch Mucitelli resulted in a no-contest 90 seconds into his encounter with Jeff Nader at 205 pounds; Josh Diekmann stopped Parker Porter with punches 72 seconds into round one of their heavyweight duel; Ryan Quinn submitted Brylan Van Artsdalen with an arm-triangle choke 2:34 into the first round of their lightweight tilt; Matt Bessette wiped out Nick Piedmont with punches 1:41 into round one of their clash at 145 pounds; and Rick DiSciullo knocked out Glenn Allaire with punches and forearm strikes 81 seconds into the first round of their bantamweight scrap.