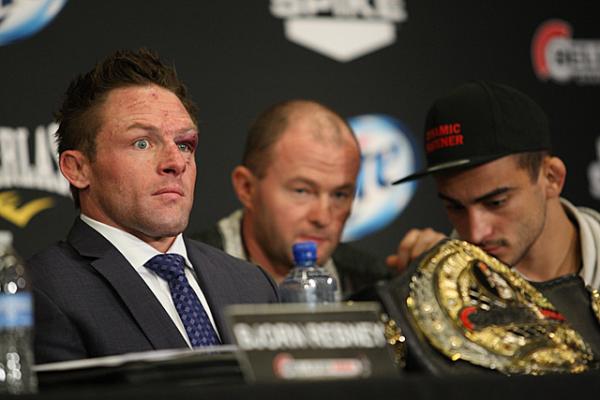 Joe Warren is on a roll at 135 pounds. | Keith Mills/Sherdog.com


Joe Warren has been here before. Whether it’s promoting a championship bout by trading barbs on social media or dragging an opponent into the deep waters of a fight, “The Baddest Man on the Planet” is confident in his abilities.

He believes his blend of experience, savvy and skill will be enough to propel him past Eduardo Dantas in their bantamweight title unification bout at Bellator 128 on Friday night.

“You know me, I’m an outspoken person. I like to get in guys heads. I’m the veteran. This is a very comfortable fight for me. This is a world championship fight, a big high-profile fight. This is something that happens every single fight for me,” Warren recently told Sherdog.com. “I don’t think it does for him. So yeah, the banter back and forth on Twitter and social media [is part of it]. Let’s sell a fight; I’m the best at doing that. Joe Warren sells the best fights, so I speak truth.”

While Dantas is 6-1 in fights that go the distance in his professional career, he has not seen the championship rounds since capturing the Bellator 135-pound strap. Warren, meanwhile, needed the full 25 minutes to defeat Rafael Silva for the interim belt in their meeting at Bellator 118 in May. That experience, coupled with his extensive Greco-Roman background, gives Warren what he thinks is a clear advantage on fight night.

“Joe Warren is a battle-tested warrior. I’ve won world championships in more than just MMA. [I’ve won in] the toughest sport in the world, Greco-Roman wrestling. I’m a veteran,” he said. “This is just like I said, another fight for me. Another championship fight. These are very comfortable situations for me, round four and round five. Dantas has never seen those rounds. He doesn’t know what it means to be in the throwdown battle war against the ‘Baddest Man on the Planet.’”

Warren and Dantas were initially scheduled to square off at Bellator 118, but the Brazilian withdrew less than a week before the bout after suffering a head injury. The 37-year-old Denver resident did not take Dantas’ withdrawal lightly.

“I fight for a living; it’s my job. For a guy to back out of fights like [that], ...it’s embarrassing. It’s not professional,” he said. “I train for a fight and five days notice before someone pulls out. He decides he’s gonna have a panic attack and can’t fight. Everyone clears him but he can’t do it.”

The former Bellator featherweight champion, Warren says he has drawn from his past failures at the previous weight class and used them to make the necessary improvements during his current run of success. Knockout losses to Alexis Vila and Pat Curran initially had him reeling. But since moving to 135 pounds, Warren has won four straight fights in the Bellator cage.

“I didn’t really believe that I could be knocked out or hurt before that. That really opened my eyes,” Warren said. “Anyone that’s had losses before, it’s the test of what kind of champion you are. Are you able to come back and learn from those mistakes, or dig yourself a hole and go to sleep?

“That just shows that I am a warrior, a champion, someone that understands. It took something from my heart those losses -- it hurt -- but I was able to turn [it] around. I dropped down to 135 and I’ve been on a streak. This is just another big fight for me to win in the Bellator cage for the fans.”