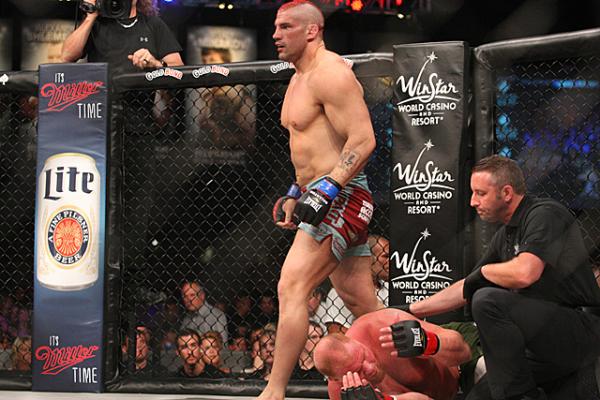 
A welterweight clash between Josh Neer and Paul Bradley will headline Bellator 129 on Oct. 17.

Promotion officials announced the pairing on Wednesday. Bellator 129 takes place at Mid-America Center in Council Bluffs, Iowa, and also includes a heavyweight co-main event pitting Houston Alexander against James Thompson. A welterweight clash between Andre Santos and James Terry and a middleweight tilt between Joe Vedepo and Davin Clark round out the evening’s main card, which airs on Spike TV beginning at 9 p.m. ET/6 p.m. PT.

Neer has righted his ship since parting ways with the UFC in 2013, winning three consecutive fights on the regional circuit. “The Dentist” last competed in August, when he submitted Travis Coyle with a first-round armbar at Victory Fighting Championship 43. Over the course of his 50-bout pro career, Neer owns notable triumphs against Melvin Guillard, Joe Stevenson, Din Thomas, Mac Danzig and Duane Ludwig, to name a few.

Bradley, meanwhile, is 1-1 in the Bellator cage. The Iowa native captured a unanimous decision victory against Karl Amoussou in his debut at Bellator 104 before dropping a three-round verdict to Nathan Coy this past March. “The Gentleman” has also competed for the UFC and Strikeforce during his 28-fight professional tenure.

The card will also feature the first female fight of the Scott Coker era, as Jozette Cotton squares off with Holly Lawson in a 152-pound catch-weight affair on the preliminary bill.