CONCHO, Okla. -- Ballyhooed Brazilian prospect Luis Alberto Nogueira made a successful Bellator Fighting Championships debut, as he outdueled Jerod Spoon and took a unanimous decision (30-27, 29-28 and 29-28) at Bellator 42 on Saturday at the Lucky Star Casino.

Sharp counter punching, crisp combinations and timely takedowns carried Nogueira to his seventh consecutive victory. The 28-year-old Brazilian delivered takedowns in all three rounds, attacked Spoon’s legs and body with clean kicks and went to the head with punches when the opportunities presented themselves.

Spoon twice wobbled the Renovacao Fight Team representative with punches -- once early in the first round and again late in the third -- but his offensive output proved to sporadic to make a difference. The defeat snapped the 26-year-old Oklahoman’s five-fight winning streak, as Nogueira moves to 11-1 in his MMA career. 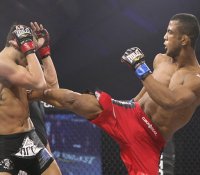 K. Mills
Noguiera (right) struck fast and often.
With Bellator's tentatively planning a bantamweight tournament for their forthcoming fifth season later this year, Nogueira will be a seeming fit for the bracket, along with other talent such as Bellator featherweight champion Joe Warren and the only man to ever beat Nogueira, Eduardo Dantas, who recently signed with Bellator.

Bellator officials told Sherdog.com that no one is yet official for the bracket, but that the blossoming Brazilian might soon be in an elimination bout to gain entry into the tournament.

Another man that might join Nogueira is little-known Shane Howell, as the Norman, Okla. native upset heavy-hitting Hawaiian Mark Oshiro with an impressive first-round submission.

Oshiro was the aggressor early with his striking. However, when he took the bout to the mat, Howell used a heel hook to change the tide. Though the Hawaiian easily escaped, Howell was first to his feet and started to land some heavy leather from top position. Howell poured on heavy ground-and-pound and sharp elbows, eventually setting up a perfect brabo choke. The deep choke forced the tap at 4:15 of the first frame.

The win was the 27-year-old Howell's six in his last seven bouts as he moved to 10-7, while Oshiro has dropped three of his last four.

Bellator Season 1 middleweight tournament runner-up Jared Hess made a successful return to action after 11 months on the shelf following his horrific knee injury against Alexander Shlemenko in the Bellator cage last May, submitting Chris Bell in the first round.

Oklahoma City's Hess was warmly welcomed by the local crowd and quickly showed off his submission skills. Hess jumped guard for a guillotine along the fence, and after Bell escaped, he quickly locked up a deep triangle, that made "Triple Threat" tap at just 1:40.

"I have had some amazing doctors here in Oklahoma City who told me that they would get me back on my feet, which they did," Hess told Sherdog.com after the bout. "There are still times that it will hurt and ache, but for tonight the knee behaved great. 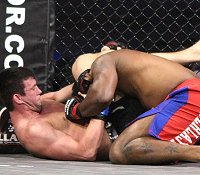 K. Mills
Hess (bottom) showed off his subs.
Odessa, Mo.'s Owen Evinger tasted defeat for the first time as Oklahoman Brandon Shelton choked him out in their featherweight contest. Shelton quickly brought the fight to the floor, threatening with an armbar before taking Evinger's back, sinking the fight-ending choke at 2:35 of the first frame.

In the evening's opening bout, heavyweight Mark Holata destroyed late replacement Tracy Willis in just 49 seconds. From the very beginning it looked like the Tulsa native Willis, who replaced Chris Guillen on two days wanted no part of Holata. Holata launched a huge knee into the midsection of Willis, who dropped to the ground and tapped as Holata followd up with punches.

Willis took the bout on three days notice, stepping in for Chris Guillen who pulled out due to an undisclosed injury.