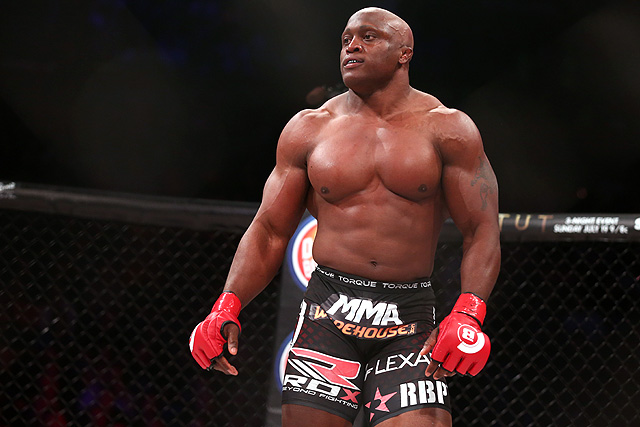 Bobby Lashley will get another crack at James Thompson on Nov. 6. | Dave Mandel/Sherdog.com


Bobby Lashley and James Thompson are going to try this one more time.

After a couple unsuccessful attempts to book the heavyweight rematch, Bellator officials announced on Friday night that Lashley and Thompson will square off at Bellator 145 in St. Louis. The tent-pole event takes place at the Scottrade Center on Nov. 6 and is headlined by a featherweight title showdown between Patricio Freire and Daniel Straus. Will Brooks will defend his lightweight belt against Marcin Held in the co-main event.

Thompson was most recently expected to face Lashley at Bellator 138, but “The Colossus” pulled out of the contest due to injury. The heavyweights were also slated to square off at Bellator 134, but it was Lashley who withdrew from that bout. In their first meeting, Lashley dropped a contentious unanimous verdict to Thompson at Super Fight League 3 in May 2012.

Lashley has won six straight fights since his loss to Thompson, including three triumphs under the Bellator MMA banner. He stopped short-notice foe Dan Charles 4:14 into round two at Bellator 138 in his most recent outing.

Thompson, meanwhile, is unbeaten in his last six appearances. He hasn’t competed since making his Bellator debut in June 2014, when he scored a first-round technical knockout victory against Eric Prindle.