COLUMBUS, Ohio -- Eight seconds. That’s hardly enough time to touch gloves for most fighters these days, but it was all that Antwain Britt needed on Saturday at Shine’s debut in the heart of the Buckeye state.

Britt devoured UFC veteran Antonio Mendes with a flurry of blows that left the American Top Team representative face first and out on the canvas as referee Mark Matheny was forced to pull the 205-pound knockout artist off the fallen fighter.

“I just kept pumping, you can’t attack if you’re backing up,” said Britt, now 7-2. “Right cross… Right elbow. Boom, dropped him. That was it.”

The lightning quick knockout was Britt’s fifth such finish in less than two minutes, while Mendes (16-5) has now lost three straight since piecing together a 12-fight win streak.

Welterweight Kyle Baker was rumored to be major-league bound after his first-round stoppage of Drew Fickett. After getting knocked cold by underdog Brian Foster in under a minute, there might be another 170 pounder who gets the call.

Foster jumped all over Baker from the opening bell with sharp punches and aggression. After catching a kick from his challenger, Foster (10-3) countered with a left-legged head kick that signaled the beginning of the end. The Hit Squad fighter abused the trumpeted prospect with both hands against the cage and put his lights out with a final right hand at the 0:59 mark

“He threw a high kick and I caught it. [I] stuck my foot upside his head and dropped him,” declared Foster after the big win.

Baker, who was coming in to the bout red hot with five wins and four straight violent stoppages, dropped to 6-4. 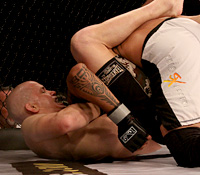 Mike Fridley/Sherdog.com
Mario Stapel submitted
Harris Sarmiento.
Mario Stapel (15-12) was another to benefit from a card of quick finishes, as the German-born fighter locked on a tight guillotine against Harris Sarmiento at 1:47 of round one. The BJJ brown belt crushed Sarmiento (25-20) with a hard right knee to the jaw before pulling guard and finishing the dazed combatant with the quick choke.

Beau Baker (7-2), the brother of Kyle, was much more fortunate Saturday night in his easy submission of Jason Nickoson (5-5). Baker roughed up his out-gunned foe with a solid knee and a left hook. A guillotine from Baker sealed the deal at 1:53 of the first stage.

Michigan native Marcus Reynolds tamed a hostile crowd in his hard-fought victory over local wrestler Brad Harris, which came at 3:16 of the second stanza. Reynolds (6-4) broke the will of his opponent by surviving an early onslaught of pain delivered from mount and the back by Harris. A hard left hook changed the tide of the fight, which forced Harris (5-1) to shoot a desperate takedown. Reynolds sprawled and beat on Harris before standing up and finishing the hometown favorite with a flurry of punches against the fencing.

Joel Wyatt had his hands full with Nick Braker before putting the slugger away with a rear-naked choke at 3:17 of the third. Wyatt (5-1) displayed grit as he struggled with the reach of Braker (3-3) at times through the first two frames. A kimura from the bottom set up a nice reversal for Wyatt, who transitioned to side-control and then the back of Braker, which led to the finishing hold.

Hawaiian Ed Newalu had his way with Dan Swift (19-25-2, 1 NC) for three rounds, as the bloodied and beaten Ohioan absorbed punishment by the ton to the ribs as face from the heavy-handed veteran. In the end, Newalu (14-11-1) took the fight with scores of 30-27 across the board for the unanimous decision.

In the evening’s opening bout, Brian Rogers (2-2) couldn’t stop Valter De Menezes’ (1-0) takedowns, as the BJJ ace dominated the ground action to take a 30-27 decision on all three judges’ cards.

Shine will hold its sophomore show in July, and will be headlined by UFC veterans Jorge “Macaco” Patino and Roan Carneiro. The event is expected to be held in Miami, Fla.