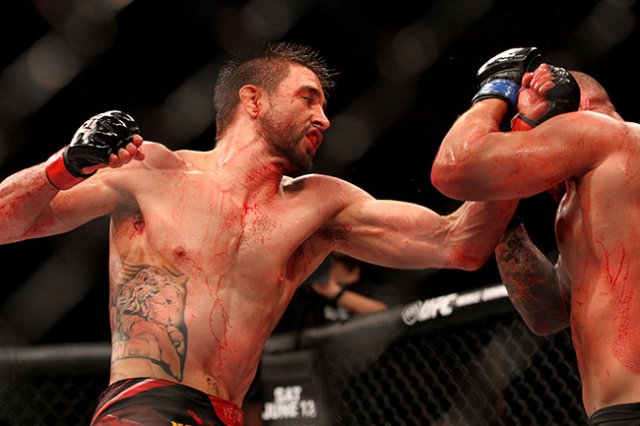 
In 10 minutes of violent and bloody Octagon time, Carlos Condit showed the mixed martial arts world that he is 100-percent healthy.

The “Natural Born Killer” stopped Thiago Alves via second-round technical knockout on Saturday in the UFC Fight Night headliner at Goiania Arena in Goiania, Brazil. The welterweight bout ended with “Pitbull” on his stool after the second frame, as a cageside doctor determined that Alves’ deformed nose had absorbed enough punishment for one night.

Alves was transported to the hospital after the bout, and it was revealed during Saturday’s post-fight press conference that the American Top Team product had experienced difficulty breathing at the conclusion of the second round. By the time Condit arrived to address the media following his triumphant return to the Octagon, about the only question that remained unanswered was his absence from the evening’s post-fight bonus announcement.

Meanwhile, any doubts about his ability to perform at a high level following surgery to repair a torn ACL and meniscus suffered in a loss to Tyron Woodley at UFC 171 last year were put to rest.

“I think that my performance speaks for itself,” Condit said. “I came out and I got the finish against Thiago Alves. He’s one of the top strikers in the division. It’s not really my decision who gets the bonuses. I’ve just got to get out there and fight and do my thing, and I did that tonight. I’m happy with that.”

While Condit was brutally efficient in earning his 28th finish in 30 professional outings, Alves had his moments in the early going. The Brazilian attacked with heavy leg kicks throughout the opening stanza in what appeared to be an attempt to test the health of Condit’s knee. Condit fired back with his usual multifaceted attack, but he wasn’t able to establish a clear advantage.

“I think I always take a little bit of time to get warmed up and find my range,” he said. “It’s a fight, so you’re gonna get hit a little bit. I was able to find my rhythm and get the win.”

Once Condit found his rhythm, Alves suffered the consequences. A standing elbow sent Alves to the canvas early in round two. With blood gushing from his foe’s nose, Condit attacked for the finish near the fence.

Alves eventually returned to his feet only to eat a couple more elbows for his troubles. The assault continued until the round expired. While Condit didn’t know the exact nature of Alves’ injury, he well aware of the effect the damage was having on jos opponent.

“I didn’t exactly know what happened but I felt it on my elbow. I knew he was hurt,” Condit said. “I hurt it on the first rising elbow, and then I hurt it again on the spinning back elbow. I could just feel the fight drain out of him after I hit him that first time.”

Despite being on the verge of defeat, Alves kept coming and probably would have continued the fight had the doctor not intervened.

“I wasn’t surprised at all,” Condit said. “Thiago Alves is a warrior and he comes to fight. There’s no quit in him. It’s not something that surprised me. I knew I was going to have to fight him until he was done.”

Now that Condit has reclaimed his place among the sport’s top welterweights, he will be an interested observer of the happenings at UFC 189, where Robbie Lawler defends the 170-pound strap against Rory MacDonald. Condit already has designs on jumping right back into the division’s championship picture.

“I want whoever has the title in a couple months, whether it’s Rory or Robbie Lawler,” he said. “I want that guy.”