LEMOORE, Calif. -- Saturday night at the Tachi Palace, Bellator’s fourth season got underway as four welterweights advanced to the semifinals of the promotion’s 170-pound tournament. However, the quarterfinals were not without controversy.

Tournament favorite Jay Hieron didn’t need long to defeat Anthony Lapsley and advance in the Bellator tournament tournament, but the win was marred by an awkward, premature stoppage. Hieron controlled the entirety of the brief fight with dominant top position against the cage. When Lapsley tried to roll and change position, Hieron stopped striking in order to hunt for submissions. 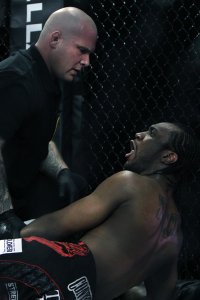 J. Sherwood
Lapsley took issue with the stoppage.
On one such occasion, “The Recipe” found himself caught in a rear-naked choke. Lapsley refused to tap, but ceased to move, leading referee Josh Rosenthal to grab his hand and halt the fight at 3:39 of the first round.

Lapsley, who took the bout on short notice replacing an injured Steve Carl, sat up immediately and complained about the stoppage as the crowd also voiced their displeasure. However, in a post-fight interview, Rosenthal stated that Lapsley’s arm was stiff and unresponsive when he grabbed it to check on the fighter, while Lapsley protested that the arm Rosenthal checked was actually being held by Hieron.

"I don't think it's unfair to say that the stoppage was not a good stoppage and I know Anthony Lapsley was prepared for this fight, ready to rock and roll," Bellator boss Bjorn Rebney said after the event, promising that Lapsley would be back inside the Bellator cage.

"I take nothing away from Jay; he's tough," a disappointed Lapsley said. "The stoppage didn't go how I liked it, but I'll be back. Don't ever count me out."

Both fighters threatened with submissions, but it was Weedman who managed to earn the close judges’ nod with better position and cleaner strikes on the ground in the first two rounds. Hornbuckle rallied in the third, threatening Weedman from back control and angling for submissions, but Weedman hung tough to hear the final bell. 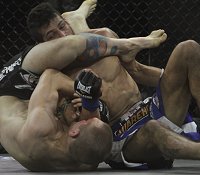 "Don't leave it in the hands of the judges. I was really surprised to see [the fights] going the distance; we knew that was going to happen with the caliber of world-class welterweights in this tournament," said Hornbuckle after the bout. "It just shows you what kind of talent Bellator brings to the table."

"I was probably as shocked as he was to hear my name at the end," Weedman admitted. "We're gonna go home and watch it again and figure out what we need to work on."

Good put his right hand on Lozano time and time again, shutting Lozano’s left eye and forcing the Cleveland, Ohio native to awkwardly wince and circle away for much of the second half of the fight. However, it wasn’t until the final two minutes of the third round that Good truly attacked, throwing Lozano on the mat, taking back mount, threatening with a rear-naked choke, and drilling his foe with right hands until time expired.

The 34-year-old Hawn, who works under Mark Dellagrotte at Team Sityodtong, used his improved striking to shut down Wallhead. For 15 minutes, Wallhead was a sitting target for Hawn’s jab, lead left hook and hard low kicks. The Olympian’s superior head movement and work rate left Wallhead idle for most of the fight, giving Hawn the clear-cut decision win.

Following the event, Bellator CEO Bjorn Rebney announced that in the welterweight semifinals, Rick Hawn would meet Lyman Good, while Jay Hieron would take on Brent Weedman. Hawn-Good will take place at Bellator 39 on April 2 in Uncasville, Conn., while Weedman-Hieron has yet to be scheduled due to a laceration sustained by Weedman in his bout. 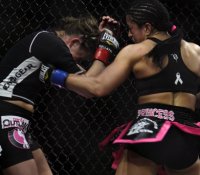 Frausto, 27, outworked Hallinan in every aspect en route to the win. Hallinan was game, pressing Frausto into the fence to take her striking advantage away, but offered little offense of her own. Frausto repeatedly spun off the fence and delivered knees and elbows in close quarters. When the fighters did separate, the striking game was all Frausto. The reigning champ was looking for a finish with big power shots that bloodied Hallinan’s nose, and forced her to clinch repeatedly.

The two women met in their respective pro debuts in February 2009, where Frausto won a highly contentious split decision. At Bellator 35, the significant other of Jorge Gurgel -- who was also victorious on the night at Strikeforce’s card in Columbus, Ohio -- was the clearly more improved fighter, moving her record to 11-1. 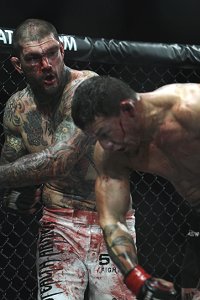 J. Sherwood
Spiritwolf (right) bested Jara.
The wild first round saw “El Cucui” floor Spiritwolf with punches and nearly submit his fellow Californian with a guillotine choke. Spiritwolf battled back, however, slicing Jara with nasty ground-and-pound in the latter half of the frame, and getting the better of the tiring Jara in the second round. The final stanza saw both men swinging for the fences, with Jara drenched in blood. In the end, it was Spiritwolf who took home the split decision with scores of 30-27, 29-28 and 28-29.

Millennia MMA featherweight Brandon Bender improved to 8-0 with a first-round submission of Josh Herrick. After being taken down early, Bender scored a trip of his own and forced the Visalia, Calif., resident to tap out at the 3:42 mark.

Paul Ruiz of Pro Buhawe wasted no time in stopping Jesus Castro in the night’s bantamweight opener. Ruiz landed a big right cross and followed up with ground-and-pound until Jason McCoy stopped the bout just 77 seconds in.