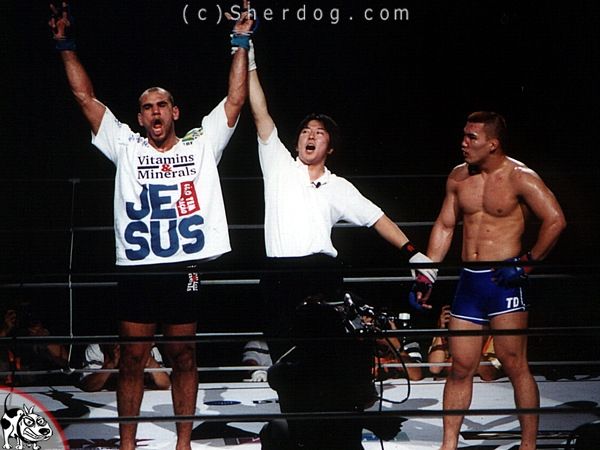 
Considered to be one of the most aggressive fighters ever to compete in Brazilian Vale Tudo, Ebenezer Fontes Braga has fought some of the biggest names in the sport, including “Rei Zulu,” Dan Severn, Kazushi Sakuraba, Forrest Griffin and Kevin Randleman.

“Pitbull” retired in 2004 after a knockout loss to current UFC heavyweight No. 1 contender Fabricio Werdum at Jungle Fight 2.

Since then, Braga has dedicated his time to his business -- an ice factory -- and his faith. Now, however, the muay Thai black belt is making another transition.

“My business grew a lot, and last year I was named shepherd in my church, so I decided it was time to change,” Braga recently told Sherdog.com. "My two sons are living in Boston, and I want to live close to them, so I sold my factory, and now I´m going to live there -- a new adventure in my life."

With his move to the U.S., Braga also has designs on a return to the combat sports realm.

“I think I have a nice history, both in MMA and K-1,” he said. “I know they love kickboxing in the U.S., and I´m planning to return to fighting world.”

Braga made it clear, however, that he will not struggle to adjust to life in a new country.

"Actually, I´m going in to a pretty comfortable situation. I just want a new challenge in my life,” said Braga, who is 13-7-2 as a mixed martial artist. “Also my father has dual nationality and lives there too."

Braga is impressed by the evolution of MMA since his retirement, but he believes there are still some aspects of the sport that have room for improvement.

“The fighters still don’t have any labor support. If they have some accident and can´t fight anymore, how they will live after dedicating 10 or 15 years to fighting?” he continued. “A good example of that is Will Ribeiro, who had a motorcycle accident and today survives in really bad conditions. I think the time has come for the fighters make some [type of] organization in order to guarantee themselves a comfortable future. After all, they are the artists who make the UFC and MMA possible.”

Braga is planning to move to Boston sometime before September. First, he will undergo a long overdue surgery on his broken nose.

“I’ve been postponing this surgery for years,” he said.