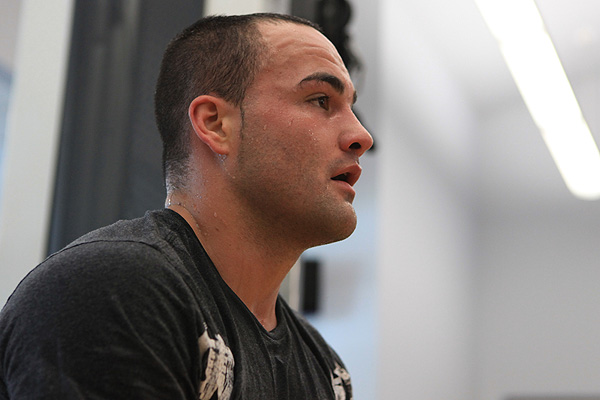 With one fight left on his Bellator contract, Eddie Alvarez wants another crack at Michael Chandler.

“I feel like that’s the fight -- the only fight -- that I would want,” Alvarez told the Sherdog Radio Network’s “Beatdown” show. “I don’t feel like any other fight would make sense.”

Chandler took Alvarez’s lightweight title in November via rear-naked choke 3:06 into the fourth round. It remains Alvarez’s only loss in eight Bellator bouts. To get the rematch, though, Alvarez said Bellator CEO Bjorn Rebney told him he’d have to win another one of the promotion’s lightweight tournaments.

“I feel like it’s the only fight that makes sense and it’s the only fight that I asked Bjorn for, and he completely denied it to me,” Alvarez said. “He said that I’d have to go through a tournament. In my head, I’m thinking if I can’t fight Michael Chandler within the next four months, what other fight makes sense? I just don’t know who, unless they’re going to bring someone in, but I don’t know who else they’re going to bring in that fans would actually want to see me fight. I just don’t see the logic in it.”

Since Bellator’s start in 2009, Rebney has stuck with his stance that the only route to a title shot goes through a tournament. At this point in Alvarez’s career, though, that doesn’t sound appealing. Another option would be a non-title bout (Chandler has one scheduled for May 4 against Akihiro Gono), but that would also have its drawbacks.

“I would like for it to be a title fight, five five-minute rounds,” Alvarez said. “Three five-minutes with me and Mike Chandler is sort of like a Toughman Contest. I would like it to be five fives to be able to really determine a winner.”

If Alvarez can’t get the title shot, he would like to go ahead and begin contract negotiations with Bellator. He could re-sign with the promotion, but a move to another show, like the UFC, is also a possibility.

Even if Alvarez doesn’t get the shot at Chandler and doesn’t re-sign with Bellator, he won’t regret his time with the company.

“A small part of me feels like we sort of grew together,” Alvarez said. “I was with Bellator from the very beginning. The idea was exactly what happened, for us to grow together. I was just becoming recognizable in the sport and Bellator hadn’t made a name for themselves yet. … It’s the first company that I’ve joined with, that I grew with, that actually made it. Bjorn did everything he said he was going to do. He was a no-nonsense type guy, very intelligent, and did everything he absolutely told me he was going to do. I respect him for that and I respect him for what he’s done.”