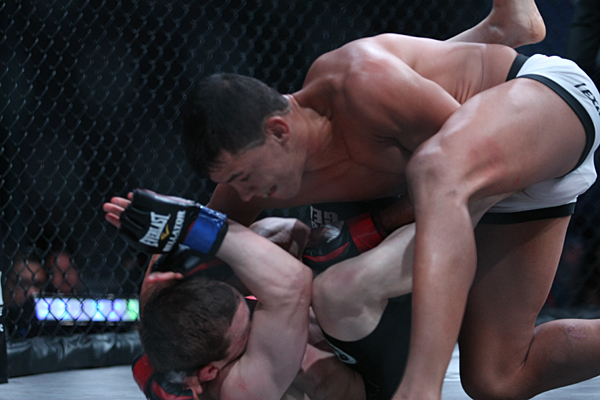 Mixed martial arts historians might someday look back at April 13, 2012 as the night Eduardo Dantas’ star was born.

Dantas rendered Zach Makovsky unconscious with a second-round arm-triangle choke, as he captured the Bellator Fighting Championships bantamweight crown in the Bellator 65 main event on Friday at Boardwalk Hall in Atlantic City, N.J. Makovsky (14-3, 6-1 Bellator) went limp 3:26 into round two, his eight-fight winning streak broken in a blink.

“This is what I do. I do it full-time,” Dantas said through a translator. “I came prepared. I trained really hard for this. I gave it my all.”

The taller and longer of the two men, the 23-year-old Nova Uniao standout went to work on Makovsky with kicks throughout the first round. Makovsky struck for a takedown in response, only to be met with an omaplata attempt from the challenger’s spidery guard. Round two was far more one-sided. Dantas (14-2, 4-0 Bellator) answered a takedown with a beautiful outside switch. He later mounted Makovsky twice before cinching the fight-ending choke. The newly crowned champion has won seven consecutive fights. Straus established an immediate foothold in the match, as he floored Corey (12-3-1, 1-1-1 Bellator) during their initial exchange. By the end of the first five minutes, Corey’s face was mangled, with visible damage to his nose and right eye. Still, he engaged Straus on the feet fearlessly and attacked the Team Vision representative in the clinch, peppering him with punches to the head and knees to the legs.

However, Straus’ left hand proved the great equalizer. He landed it at will on Corey and rode it into the featherweight tournament final, where he will meet former Sengoku champion Marlon Sandro. In a fight marred by vast stretches of inactivity and posturing, Nogueira (13-2, 3-1 Bellator) surprised the decorated freestyle wrestler with a pair of late first-round takedowns. Vila bounced back in the second, but the 41-year-old Cuban appeared to fade down the stretch. In round three, Nogueira found a home for his combinations, alternating between punches to Vila’s head and kicks to his leg and body. K. Mills
Galvao was aggressive and
dominant on the ground.
Two-time Brazilian jiu-jitsu world champion Marcos Galvao leaned on takedowns and clean, technical topside grappling in capturing a unanimous decision from Ed West in the Bellator Season 6 bantamweight tournament quarterfinals. All three judges scored it the same: 30-27 for Galvao (11-5-1, 2-2 Bellator).

A 30-year-old Nova Uniao representative, Galvao worked takedowns in all three rounds and fought through a number of submission attempts from West (17-7, 3-3 Bellator), moving to dominant positions against the Arizonan when the opportunities presented themselves. The Brazilian set the tone with a strong first round, at one point knocking a leaping West out of the air with a right hand.

Rounds two and three followed a similar narrative, as the two bantamweights wound up on the ground, where Galvao was the superior fighter. West remained competitive throughout the 15-minute bout, landing a clean head kick in the third round and leaving Galvao’s lead leg badly bruised with kicks. K. Mills
Heckman choked Caslow out.
Scott Heckman won for the fifth time in six appearances, as he submitted Lester Caslow with a first-round rear-naked choke in an undercard duel at 145 pounds. Caslow (7-7, 1-2 Bellator) met his end 3:40 into round one.

After catching a kick from Caslow early in the round, Heckman (10-3, 2-1 Bellator) smothered his foe on the mat and against the cage. He passed to half guard, fished for an arm-in guillotine and then moved to Caslow’s back during a scramble. The rear-naked choke came next, followed soon after by the tapout. McCray struck for three total takedowns in the first two rounds and attacked Barbosa with short elbows and punches. The Brazilian had his moments, as he threatened with a rear-naked choke in the second round and a triangle choke and armbar in the third. None of the attempts were successful, however, and the decision ultimately went against him.

The 30-year-old McCray has rattled off three straight wins since being released by the Ultimate Fighting Championship following losses to Court McGee, Carlos Eduardo Rocha and John Hathaway.


Former Bellator welterweight champion Lyman Good barely broke a sweat, as he wiped out LeVon Maynard with punches 13 seconds into their undercard bout.

Good clocked Maynard (12-9, 1-3 Bellator) with an immediate right hand and followed him to the ground, landing in half guard. From there, the 26-year-old Team Tiger Schulmann standout unleashed a series of five unanswered blows that left referee Kevin Mulhall no choice but to step in on Maynard’s behalf. Good (12-2, 5-2 Bellator) has recorded two wins in three appearances since surrendering his Bellator title to Ben Askren in October 2010. Keith Mills
Brooks got to show off his
strength against Malyutin.
Missouri-based lightweight prospect E.J. Brooks kept his perfect professional record intact, as he captured a unanimous decision from M-1 Global veteran Mikhail Malyutin in a preliminary matchup at 155 pounds. All three cageside judges scored it for Brooks (6-0, 3-0 Bellator): 30-27, 30-27 and 30-26.

Brooks, 26, peppered his Russian foe with kicks to the leg and body, struck for takedowns in all three rounds and mounted Malyutin (21-10, 0-0 Bellator) in the third.