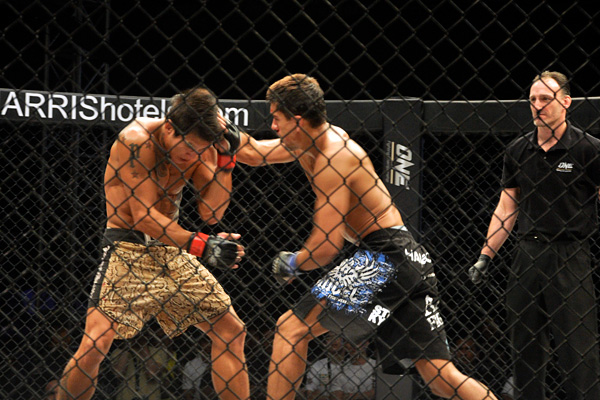 
JAKARTA, Indonesia -- Major mixed martial arts returned to Indonesia for the first time in seven years on Saturday, with One FC 2 “Battle of Heroes” from the Kelapa Gading Sports Mall. While a couple fighters on the card also made triumphant comebacks, the evening was far less pleasant for co-headliner Ole Laursen, who fought for the first time since October 2010.

It was Felipe Enomoto who spoiled Laursen's return from hiatus in the main event and stopped his own two-fight skid in the process. Laursen was very determined and dominated the largely striking-oriented affair through the majority of the first two rounds. Midway through the second frame, however, Laursen started to showboat a bit too much for comfort. Enomoto capitalized on the opportunity and rocked Laursen, sending him to the floor.

The Swiss-Japanese fighter jumped on his opponent and got back control. Laursen seemed desperate not to submit, but in the end succumbed to the pressure and tapped out at the 3:49 mark of round two.

"Two times I was really hurt, but I knew I just had to believe in myself and keep on going," said Enomoto after the fight. "My brother kept telling me to go for the high kick, and that's what I did. Luckily it worked."

Fifty-six seconds into their co-featured bout, a beautiful transition from Bae Young Kwon led him to back mount on Honorio Banario, allowing Kwon to squeeze a tight rear-naked choke for the win.

Earlier, powerful ground-and-pound and surprisingly good submission defense propelled Rustam Khabilov to a unanimous decision victory over Rodrigo Riberio. Though the Brazilian is a decorated grappler, he never came close to threatening Khabilov, who obliged Riberio by happily diving into his guard with punches on numerous occasions. That, along with several takedowns, allowed the Greg Jackson-trained fighter to come away with a unanimous decision.

CFC champion Gustavo Falciroli won his second-straight fight by quickly tapping Soo Chul Kim with a rear-naked choke at 1:12 of the first round. The Australia-based Brazilian never gave his opponent a chance, and after a slick transition from front headlock to back control, cinched the fight-ending hold.

It was a short night of work for Rolles Gracie, who forced Bob Sapp to submit to punches at 1:18 of the opening frame. After taking numerous shots on the ground from the Brazilian, who didn't attempt a submission, Sapp decided he had enough and tapped out.

"Ever since I saw his fight against (Antonio Rodrigo) Nogueira, I knew I was going to fight him," said Gracie, who won his third consecutive bout since losing to Joey Beltran in his lone UFC appearance.

Victorio Senduk made a successful return to MMA competition, literally kicking out Raymond Tiew's knee in round one. The Indonesian favorite had to survive a rough time while mounted, but he eventually escaped and landed the leg kick that ended Tiew's night at the 4:02 mark.

Geje Eustaquio outlasted Alex Silva over the course of 15 minutes to earn a unanimous decision victory. Silva tired quickly after over-committing to a triangle choke in the early going, and the latter part of the fight saw Eustaquio defending weak takedown attempts and punishing his opponent in the standup for a well-deserved win.

Irshaad Sayed's aggressive approach paid off quickly when he downed Filipino Jessie Rafols with a short left uppercut 1:49 into the first stanza.

Malaysian Pete Davis finally found an answer to Ngabdi Mulyadi's takedowns, submitting the Indonesian with only 66 seconds left in the contest. Davis spent much of the fight trying to fend off his foe in the clinch and off his back.

Zuli Silawanto blasted Agus Nanang with punches to earn a stoppage in just 45 seconds in a crowd-pleasing bout to kick off the card.