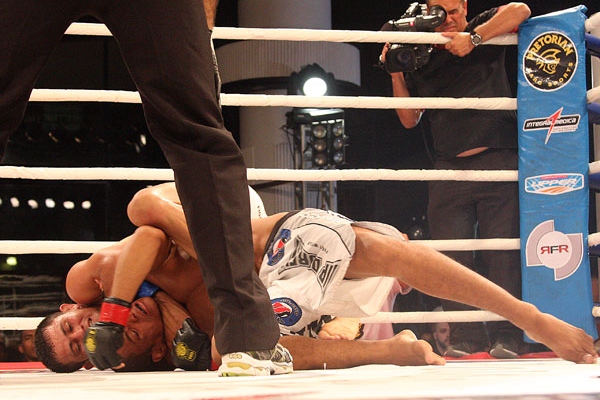 Curiously, the title bout was a duel between two Nova Uniao-affiliated fighters. Although they don’t train together -- Formiga lives in Natal, Rio Grande do Norte, while “Maicon” resides in Fortaleza, Ceara -- both men represent the team of Andre Pederneiras, who also serves as the president of Shooto Americas.

The bout -- a rematch of the November 2008 affair in which da Silva claimed the vacant title -- was all-action from the start, with Formiga dominating after some difficulties in the first round. In the second stanza, the champion was able to impose his game, taking full mount and punishing his opponent with offense from on top. In the waning seconds of round two, Formiga took Costa’s back and applied a rear-naked choke, forcing a tap at the 4:55 mark.

“Our team is getting stronger each time, and together, our boys are very well,” said Jair Lourenco, leader of Nova Uniao Kimura, the team responsible for producing the likes of Formiga, Renan Barao and Ronny Markes.

Another Lourenco product, heavyweight Caio Alencar, made a strong impression in his MMA debut. A gifted grappler, Alencar had little trouble bringing opponent Wagner Camara to the ground and finishing with a rear-naked choke at 3:10 of the first frame, showing that his team has one more name to be feared.

Another revelation was Rafael “Gaucho” Viana, a Ruas Vale Tudo student and sparring partner of Glover Teixeira and Pedro Rizzo. Viana managed to finish Armando Sapinho of Brazilian Top Team inside the second round with a rear-naked choke.

Also noteworthy was Junior Oliveira, who took out the tough Aquiles Campos via TKO at 2:50 of round three, and Andrew Tigrao, who rear-naked-choked Julio Cesar “Field” de Almeida after just 3:40.

Satisfied with his organization’s latest show, Pederneiras told Sherdog.com that Shooto Brazil will partner with the Brazilian Federal Police on Nov. 25 to stage an event in the national capital of Brasilia.

“With the success of Shooto with B.O.P.E., a few days after that event, I got a call from the Federal Police in Brasilia, revealing the desire to make a Shooto event there,” said Pederneiras. “Now, it’s all right and the event will be held on Nov. 25, which is the day of the Federal Police. It will be a closed event in the headquarters of the Federal Police. In the coming days, we’ll be finalizing the card and will make announcements, but I can say that we’ll have great fights.”