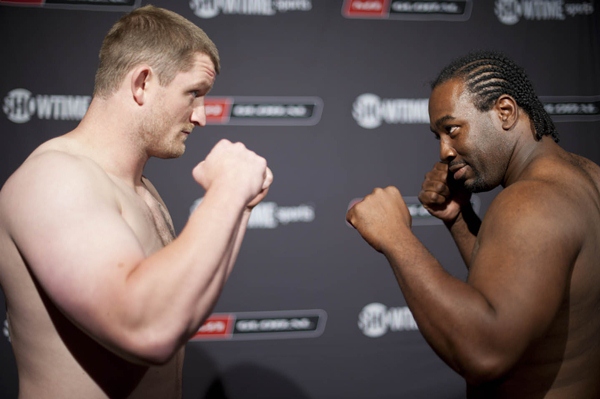 
The stage is set for M-1 Global’s second stateside offering of 2011, as M-1 Challenge 26 heavyweight headliners Kenny Garner and Pat Bennett tipped the scales at a respective 256.6 and 240 pounds Thursday in Costa Mesa, Calif.

Garner and Bennett will tangle for the second time Friday inside the Hangar at the Orange County Fair and Events Center, with this meeting broadcast live on cable channel Showtime and streamed outside the U.S. on M-1Global.com. The big men first crossed paths in September, when Garner punched out Bennett in the first round to win the 2010 M-1 Selection Americas heavyweight tournament.

“Deep down, I think he knows I’m a much better fighter than I showed in our last fight,” Bennett stated in a Thursday release from M-1 Global. “Every heavyweight has knockout power -- that’s just a fact of being a heavyweight. It doesn’t matter who you’re fighting, you just have to keep your hands up.”

For his part, Garner offered a very specific prediction.

“As soon as I connect, start counting. I’ll end the fight in six punches,” said Garner. “I fought him and beat him so fast that I don’t think he knows what happened.”

After their initial encounter, Garner faced unbeaten Ukrainian Guram Gugenishvili for the vacant M-1 heavyweight title and was guillotine-choked unconscious in the second frame. The American Top Team fighter rebounded with an April knockout of Danny Lockhart at an Art of Fighting event in Jacksonville, Fla.

Bennett, a three-time NCAA Division III All-American wrestler, has competed just once since the loss, fighting Alexander Volkov to a controversial December draw that was later ruled a unanimous decision in Bennett’s favor.