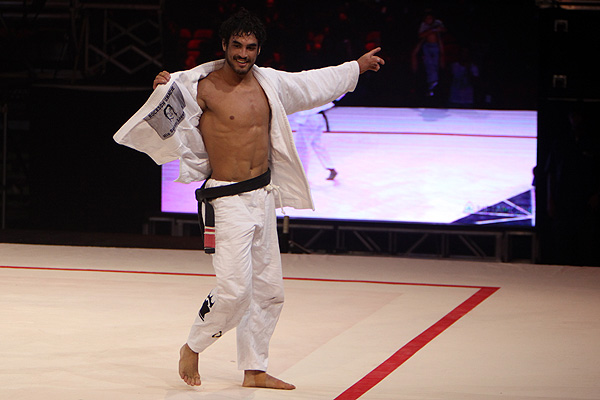 Kron Gracie will make his MMA debut before the end of the year. | Photo: Dave Mandel/Sherdog.com

Several matchups were announced Monday for Real 1, which takes place Dec. 23 at Ariake Coliseum in Tokyo.

Gracie, the youngest son of Brazilian legend Rickson Gracie, will be one half of the main event. The 26-year old does not yet have an opponent, but his bout will be contested across three five-minute rounds at a catchweight of 160 pounds.

A welterweight title fight between promotional champion Marcos Souza and challenger Kenta Takagi is also scheduled for three five-minute rounds. All other matches at the event, which will be held inside a circular cage, will be two five-minute rounds. The rule set will be similar to the Unified Rules of Mixed Martial Arts, with exclusion of elbow strikes.

Garcia, known for her extensive jiu-jitsu credentials, which include nine world championships, will be fighting 42-year-old Megumi Yabushita. The Japanese fighter has 41 professional fights under her belt, and currently is riding a six-fight losing streak. She has faced competition the likes of Rin Nakai, Sarah Kaufman, Shayna Baszler, Lisa Ellis, Roxanne Modafferi and Marloes Coenen.

In an interview with Tatame.com, Garcia said she plans to fight at 205 pounds, but had about 20 pounds left to lose. Yabushita usually fights at 135 pounds, which could make for quite a differential in the open-weight bout.

In February, the United States Anti-Doping Agency announced that Garcia had tested positive for a drug called Clomiphene. She was subsequently stripped of her titles for 2013, however she was found to have used PED’s unknowingly and as such was not suspended from International Brazilian Jiu-Jitsu Federation. Clomiphene, when used for women, is supposed to be used as a fertility drug.