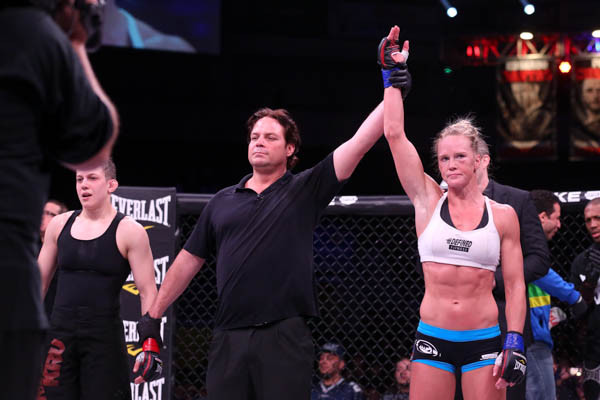 LFC promoter Mick Maynard informed Sherdog.com of the signing on Wednesday. According to Maynard, Holm will make her LFC debut on July 19 at LFC 21 against a to-be-named opponent. The event takes place at the Arena Theater in Houston and is headlined by a bantamweight title headliner between Angel Huerta and Matt Hobar. The evening’s main card airs live on AXS TV and will also see ex-UFC talent Leonard Garcia make his promotional debut against Rey Trujillo.

Holm recently announced her retirement from boxing in order to focus full time on mixed martial arts. The New Mexican has held world titles with multiple organizations and was named Ring Magazine’s female fighter of the year in 2005 and 2006. Holm closed out her pugilistic career with a unanimous decision victory over Mary McGee on May 11 to retain her IBA and WBF belts.

The 31-year-old southpaw competed in MMA three times while maintaining her boxing career, picking up two victories in 2011 before returning to the cage this past February, when she stopped an undersized Katie Merrill at Bellator 91.