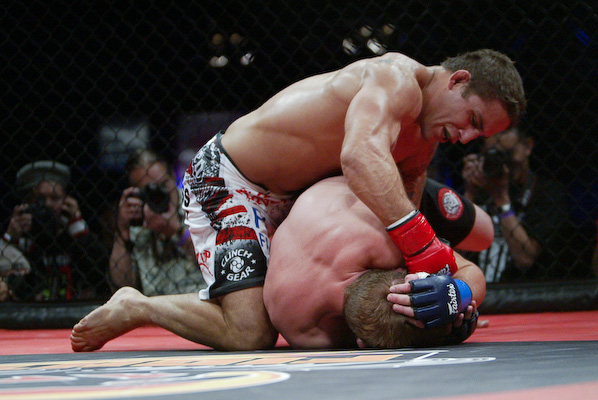 
LEMOORE, Calif. -- Chad Mendes earned a dominating unanimous decision over Mike Joy in the main event of the inaugural Tachi Palace Fights “Most Wanted” at the Tachi Palace Hotel and Casino Thursday.

Mendes, a standout wrestler who trains with former WEC featherweight champ Urijah Faber, controlled the fight from start to finish. Joy spent the majority of the fight on his back and had no answer for Mendes’ relentless ground-and-pound attack. Mendes scored with takedown after takedown, avoiding submission attempts and pounding away from the top.

In the co-main event, David Mitchell earned a split decision over “The Ultimate Fighter 6” alumnus War Machine, formerly known as Jon Koppenhaver, with scores of 28-29, 29-28, and 30-27.

Mitchell proved that a fight can be won from the bottom. He spent the majority of the bout on his back working the rubber guard, often trying for a gogoplata. War Machine had little to give on the ground, but when the fight returned to the feet, he winged single power punches looking for the one-strike finish. 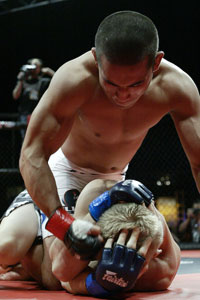 Jeff Sherwood/Sherdog.com
Soto showcased his arsenal.
In a battle of undefeated featherweights, Joe Soto showcased his submission arsenal against Mike Christensen with a rare gogoplata finish at 2:06 of the first round.

Christensen scored with a takedown and worked from the top, but the limber Soto snaked his foot over Christensen’s head to secure the submission before rolling his opponent over.

Lemoore native Poppies “The Tachi Kid” Martinez submitted Sergio Salcido with a guillotine choke 3:21 into the second round. The welterweights were slow to get started, feeling each other out trying to find their range. Salcido showed flashy kicks that were mostly evaded by Martinez.

Martinez fought much more conservatively than he has in the past, and it paid off. As Salcido attempted a takedown, Martinez grabbed the guillotine, pulled guard, and rolled Salcido over, forcing the tapout from full mount.

Ulysses Gomez submitted Martin Sandoval with a rear-naked choke just 36 seconds into the second round of their flyweight bout. The fight was all Gomez, who controlled the ground game and threatened with submissions until he took Sandoval’s back and sunk in the choke.

Brazilian jiu-jitsu specialist Leopoldo Serao won a close split decision over local favorite Phil Collins in a classic grappler vs. striker matchup. For three rounds, Collins tried to keep the fight standing, while Serao looked to take it down.

Serao was close to finishing the fight with several submission attempts, which prompted the judges to score in his favor. Collins defended well and landed a few shots, but couldn’t find the fight-ending strike.

Michelle Ould spoiled pro boxer Jessica Rakoczy’s MMA debut, stopping Rakoczy with punches from the mount at 1:40 of the second round. Ould controlled the bout with a dominant performance that showcased her superior ground game.

Michael MacDonald had little trouble dispatching Carlos Garces in their bantamweight contest with punches at 2:01 into the first round. McDonald controlled the pace of the fight and kept it standing, finally landing a right that floored Garces. McDonald followed him to the mat and finished with strikes.

The first fight of the evening ended in a controversial split decision. Francisco Loredo got the judges’ nod in a close contest against Chris Tangonan. The crowd disagreed, booing loudly.