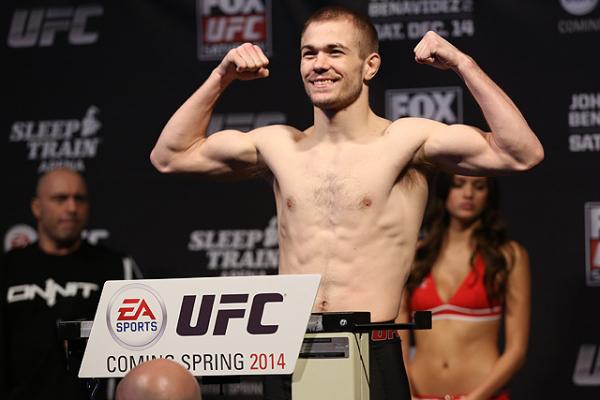 Michael McDonald is coming back to the cage. | Photo: Dave Mandel/Sherdog.com


Onetime UFC bantamweight contender Michael McDonald will make his long-awaited return to the Octagon when he takes on Japanese import Masanori Kanehara at UFC 195.

UFC officials on Monday announced the matchup via Fox Sports. UFC 195 is set to take place Jan. 2 at MGM Grand Garden Arena in Las Vegas and is headlined by a welterweight title bout between champ Robbie Lawler and Carlos Condit.

McDonald, 24, has been sidelined since December 2013 with a series of hand injuries. The Californian started his Zuffa career with five straight wins en route to a 2013 interim title fight with Renan Barao, who tapped “Mayday” in the fourth round. McDonald would go on to submit Brad Pickett and be submitted by Urijah Faber before injuries took him out of action.

Kanehara, 32, is a former Sengoku featherweight champion who embarked on a six-fight winning streak after dropping to 135 pounds. He holds a 1-1 record since joining the UFC, with a decision win over Alex Caceres in his 2014 Octagon debut and a narrow loss to Rani Yahya in July.