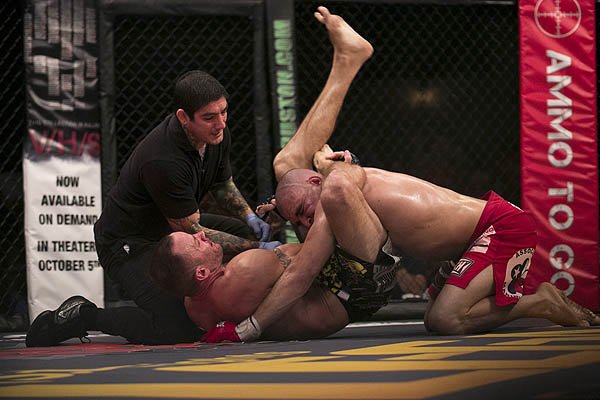 Jeff Rexroad needed but a small window of opportunity, and Lucas Pimenta provided it for him.

Rexroad submitted the Brazilian jiu-jitsu black belt with a modified triangle choke to become the interim Legacy Fighting Championship welterweight titleholder in the LFC 14 headliner on Friday at the Arena Theatre in Houston. The surprising tapout came 3:17 into round two, as Rexroad snapped the Brazilian’s eight-fight winning streak.

A Jorge Patino protégé, Pimenta had Rexroad in serious trouble in the first round, as he waylaid him with stinging punches on the feet and well-disguised takedowns. At the end of five minutes, the Texan was a battered mess, his left eye on the verge of swelling shut. The damage did nothing to dissuade him.

Pimenta secured another takedown midway through round two, only to fall asleep inside the Rexroad guard. The Paradigm Training Center representative neutralized the grappler from the mission control position, snaked his arm underneath Pimenta’s free limb and delivered the fight-ending choke. Rexroad has won his last five bouts, three of them via submission.

In the co-main event, surging flyweight Joshua Sampo notched the most significant victory of his 10-fight career, as he cruised to a unanimous decision over Ultimate Fighting Championship castaway Antonio Banuelos. Sampo swept the scorecards by matching 30-27 counts. Andy Hemingway
Sampo topped Banuelos.
Banuelos was a never a factor in the 15-minute battle. Sampo threaded jabs, knees and leg kicks through his defenses with surprising ease, mixing in a first-round takedown and mount for good measure. As the bout neared its conclusion, Sampo’s efforts resulted in a cut near Banuelo’s left eye, blood streaming down his chest.

A longtime training partner of UFC hall of famer Chuck Liddell, Banuelos has lost back-to-back bouts for the first time in more than a decade as a professional.

Peterson weathered a number of encounters with his foe’s potent right hand, two of them resulting in knockdowns. To his credit, the 22-year-old kept his composure, regained his wits and made his move when the opportunity presented itself. By the start of the second round, it became clear Williams was a spent force. Peterson scored with a takedown and grinded away with a series of short elbows. Later, after another takedown, Peterson transitioned to the omaplata, chicken winged Williams’ opposite arm and exerted enough pressure to coax the tapout. A. Hemingway
Peterson overcame serious abuse
to tap Williams.
Elsewhere, 2009 NCAA Div. I wrestling champion Darrion Caldwell made a successful professional mixed martial arts debut, as he cruised to a unanimous decision against the overmatched David Armas. All three cageside judges scored it the same: 30-27 for Caldwell.

A Power MMA Team member, Caldwell struck for takedowns in all three rounds and mounted his foe on two separate occasions. He threatened Armas with a rear-naked choke in round one, but the former North Carolina State University superstar did most of his work from side control and half guard. Outside of a right hand inside the first 10 seconds of the bout, Armas did virtually nothing from an offensive standpoint.

Finally, Bellator veteran Derrick Krantz needed a little more than a minute to submit Brandon Farran in a welterweight showcase. Krantz elicited the tapout 71 seconds into round one.

Farran stuck Krantz with a quick right hand and landed a takedown during their initial exchange. However, his decision to move towards an ill-advised foot lock proved disastrous. Krantz transitioned to his back, minus the hooks, and locked in the choke. With that, Farran was a beaten man. Krantz now has 12 first-round finishes among his 13 professional victories.

In other action, Lester Batres stopped Jonathan Harris on a series of third-round knees and punches 2:11 into round one of their welterweight duel; Gladiators Academy representative Matt Schnell captured a split decision over Ryan Hollis at 125 pounds; Charles Ontiveros took a unanimous verdict from Anthony Tatum in a welterweight showdown; Terrance Ferguson submitted Patrick Hutton with a rear-naked choke in the first round of their 180-pound catchweight encounter; and Kaileb Cummins coaxed a tapout from Patrick Greene with a guillotine choke in round three of their welterweight tilt.