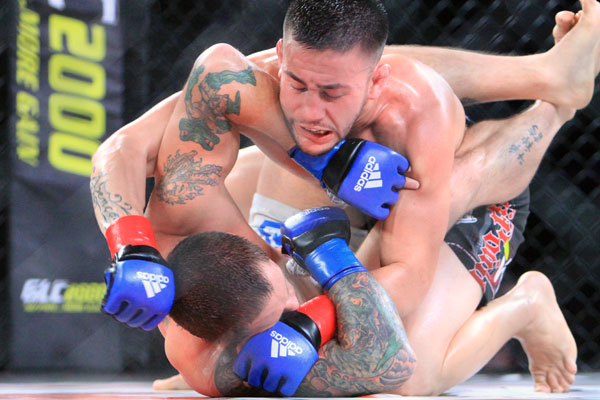 Munhoz earned a split decision over the former World Extreme Cagefighting featherweight title challenger at the StubHub Center in Los Angeles, capping a six-fight main card broadcast on AXS TV. Both men struggled to find their footing in the main event, as condensation settled on the RFA canvas in the open-air arena.

“I feel great. Thank you, Jeff, for the opportunity. You’re very tough,” Munhoz told commentator Pat Miletich after his victory. “[The canvas affected me] a lot. I was trying to box with him, but it was very hard. But, you know, fighters fight anywhere.”

Munhoz stalked Curran through most of the contest, though the veteran continually rifled a stiff jab into his younger opponent’s mug over the course of 25 minutes. Both fighters had their moments throughout the bout, with the Brazilian preferring hard, explosive strikes against Curran’s measured but effective attack.

The Kings MMA rep cut Curran late in the bout and scored takedowns in each of the final two rounds, though “The Big Frog” proved game off his back, slicing open Munhoz with an elbow of his own from guard. In the end, however, the RFA title was wrapped around Munoz’s waist, as the Brazilian earned scores of 50-45 and 49-46 from judges Larry Landless and David Magallanes to take the split verdict. Judge Milan Ayers indefensibly gave Curran the first, second and fourth rounds for a 48-47 scorecard.

“I think I’m ready for the next step after this fight, for sure,” said Munhoz. “I’m going to train harder and harder and put 100 percent into my training every day.”

The 26-year-old Munhoz is now 9-0 in his campaign. Following the bout, Curran announced his intention to retire after a 15-plus-year career that spanned more than 50 fights.

Veteran grappler Kevin Casey handed middleweight prospect Casey Ryan his first professional defeat in the co-main event, earning a unanimous decision over the “Spider Monkey” with scores of 30-27 across the board.

“The Ultimate Fighter” alum wasted no time in round one, scoring with stomp kicks to the knee before hitting a takedown. Though Ryan did his best to roll away from Casey’s top pressure, the Alliance MMA rep soon found himself briefly mounted before riding out the remainder of the round from guard.

Rounds two and three easily belonged to the “King.” Casey landed several clean shots to begin the second stanza before once again putting his foe on his back in each of the final two rounds. Though Ryan nearly secured a last-ditch armbar attempt in the bout’s dying seconds, the effort would not prove adequate to sway the judges in his favor.

Though Rinaldi hit the cage on the warpath in the opening moments, Ortega stayed composed while looking to counterpunch. Following their action-packed first frame, the pace slowed slightly in round two, with Rinaldi ripping shots to the head and body before scoring a takedown -- a feat he would repeat early in round three. However, Ortega sustained virtually no damage off his back, instead punishing his opponent with elbows from the guard while threatening with triangle attempts. Finally, the 22-year-old found his mark, sliding his leg across Rinaldi’s collarbone and cinching the triangle choke that ended the fight at 2:29 of the final frame.

Earlier, two-time NCAA heavyweight wrestling champion Steve Mocco cruised to a unanimous decision over onetime Bellator MMA vet Lew Polley, using his superior grappling to score takedowns and ride Polley through the vast majority of the first two rounds. Though Polley managed to stave off Mocco early in the third frame and sting him with several hard jabs, the former Olympian eventually secured a final takedown, earning scores of 30-27 (twice) and 29-28 from the cageside judges.

Jouban charged forward hard and heavy from the get-go, rifling off cracking punches and kicks to the head and body and pounding away with elbows from the clinch. Spang remained composed, however, covering up well and attacking as his foe faded to end the frame.

Nevertheless, Jouban appeared to catch his wind several times throughout the contest and launched several hard flurries throughout the second and third rounds, the last of which rocked Spang against the cage and forced referee John McCarthy to wave off the bout and save “The Kiss” from further punishment.

Both men found success early in the flyweight showdown, with Swanson picking his shots on the inside while Manzanares worked from range with low kicks. Manzanares attempted a takedown to seal the round but saw his shot reversed, as his opponent whipped him around and landed several blows from top position.

Swanson upped his pressure in the second stanza -- even after receiving a low blow -- as the Jackson’s Mixed Martial Arts rep scored a nice double-leg takedown early in the frame. After Manzanares regained his base, the New Mexican once again took him to the mat, this time off a low kick counter. However, Manzanares immediately countered the technique, locking up a tight armbar from guard that forced Swanson to tap out 3:37 into round two.

Female flyweight prospect Justine Kish took out Team Hurricane Awesome's Christine Stanley for her second pro win, as the decorated kickboxer got her second submission victory, too. The native North Carolinian, now training out of San Pedro, Calif., locked up an armbar for the tap at 4:29 of the second frame.

At a contracted weight of 160 pounds, L.A.'s James Moontasri shut down the wrestling of Strikeforce veteran R.J. Clifford, stuffing his single-leg takedowns for two rounds before polishing him off with punches at 2:40 of the third round.

In the card's opening contest, Brazilian Perceu Friza used his sprawl and sharp striking to leave Nick Jordan helpless on the feet for 15 minutes, winning three 29-28 scores on the judges cards.