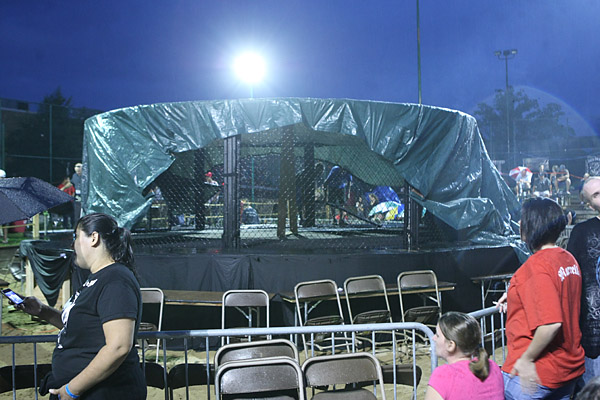 
ISLAND LAKE, Ill. -- The 41st event from Jeff Curran’s Xtreme Fighting Organization was postponed for more than an hour due to rain Saturday, but the show -- XFO’s seventh annual “Outdoor War 7” -- did go on as the rain slowed to a trickle.

In the evening’s main event, Milwaukee’s Eric “Red” Schafer stepped into the cage for the first time since his March 2010 release from the UFC, defeating wrestler Chris Albandia in impressive fashion.

Albandia worked some leg kicks before eating a big right hand which Schafer followed up with a combination. Albandia, a wrestler, responded by shooting in for a takedown. Schafer sprawled, attempted an arm-in guillotine, and then abandoned the guillotine and set up a picture-perfect triangle choke. The fight was over in just 1:41.

“Actually, that’s exactly how I pictured it would go,” Schafer told Sherdog.com, post-fight. “I knew he’d take me down. I didn’t know if I was going to stuff the takedown or not. I think I went for the guillotine and that’s why I got taken down, and then I knew if I got taken down I was going to shoot up triangles, omaplatas, armbars, until I got them.”

Schafer also specifically worked on the punches he used in the fight with boxing coach Scotty Sievewright and kickboxing coach Adric Kennedy. K. Mills
Schafer choked Albandia in round one.
“Right cross and hooks, the jabs are so good against a lefty, so it’s exactly what we worked,” he said, expounding on his strategy in the fight. “I knew I was choking him, but not enough to waste the energy, so I let go of it and went to [what] B.J. Penn calls ‘the damn good guard,’ overhook on one side. [Then I] shot up the triangle after I punched him a few times. Textbook.”

Schafer felt his performance has improved due in no small part to his cut to 185 pounds. Earlier in his career, he trained with former UFC light heavyweight champion Forrest Griffin, who walked around at 220+ just two weeks before a fight. Schafer decided to bulk up and get a little extra muscle mass since he was also
fighting at 205 pounds.

“My legs were way bigger,” he recalls. “I had a lot of muscle. That’s not good for cardio; it’s not good for flexibility, and I think it showed a little bit. I was very stiff. I felt a lot more fluid fighting tonight. I naturally walk around at 210. That’s way too small for 205 at UFC level.”

Aside from the weight cut, the fight was Schafer’s first since departing Roufusport and opening his own gym, Red Schafer MMA. It was also his first fight since starting the paleo diet, though he’s been grappling on the diet for around 9 months. Schafer says he has seen marked improvements in his endurance during that time.

“I had hour-long matches, 20-minute matches, half-hour-long matches grappling, undefeated, never got tired, broke people’s wills ... and that was my weakness in the old days, getting tired. So the diet, the proper weight, I think it’s a little bit of everything. I just feel better,” he said.

Schafer hopes to have a couple more fights before trying to work his way back to the big show, and would love to continue fighting for XFO since it’s a Midwest show that’s close to home.

“I’d rather have my friends and family here. It makes me fight for them a little bit,” Schafer said.

In the night’s bantamweight co-main event, Team No Ego’s Daniel Aguirre defeated Casey Dyer via guillotine choke in the opening round. It was a back-and-forth battle on the feet, but Dyer was able to catch one of Aguirre’s kicks and transition to a takedown before succumbing to a tight guillotine choke from half-guard at the 2:19 mark. K. Mills
Reddington (top) decisioned Reynoso.
In the only decision of the night, Greg Reddington defeated Christian Reynoso. Reddington landed several takedowns, with Reynoso pulling guard or half-guard. Although much of Reddington’s ground-and-pound was effectively neutralized by Reynoso, the Team Curran fighter primarily played a defensive game and Reddington was able to land unanswered punches and elbows.

In the second round, Reynoso had a beautiful double-leg takedown, but did not land many punches from top position. Reddington was also more aggressive in the standup department, with some wild shots which didn’t quite connect, but many punches finding their range. All three judges scored the contest 30-27 for Reddington.

A top prospect from the Midwest Training Center, Chicago’s “Ill” Will Brooks defeated Joe Richardson in the first round via armbar. Brooks also landed two impressive takedowns in the short bout.

In an exciting flyweight bout, Team Curran’s Joey Diehl” defeated Finney’s H.I.T. Squad fighter Josh Epps via rear-naked choke in just under two minutes. Only moments into the bout, Diehl worked for what looked like a perfect arm-triangle choke, but Epps somehow managed to survive until Diehl pounded away and transitioned to a rear-naked choke. Diehl emerged victorious, but took some punishment in the process; he was left with a huge gash on his face at the end of the short bout.

Local favorite “Uncle” Kent Rexford punched out Quartus Stitt in round two of their bout. Rexford landed heavy punches, taking Stitt’s back and landing shots to the head and body until referee Al Wichgers was forced to call a stop to the bout at 1:17 of the second frame. K. Mills
Marrello (top) stopped Scholten.
Team Curran’s Mike Marrello stepped in for his first fight in over two years, making short work of Brad Scholten. The former “Ultimate Fighter” contender, who made it to the show but was eliminated before entering the house, landed some kicks and punches before pounding Scholten from mount. Scholten worked to push off the cage to no avail, as Marrello took his back and quickly applied a rear-naked choke to secure the tap after only 76 seconds.

The first fight of the evening had barely started when Team No Ego’s Chris “Bad Boy” Haney defeated Dexter “The Destroyer” Wright after 10 seconds by way of head-kick knockout.