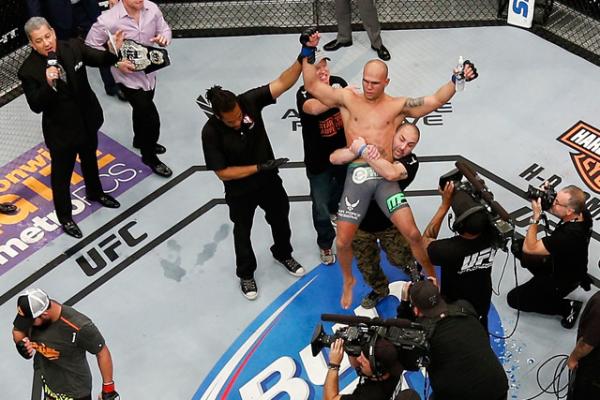 
Robbie Lawler’s long journey through mixed martial arts reached its pinnacle, as he left the cage with the Ultimate Fighting Championship welterweight title fastened to his waist.

The “Ruthless” American Top Team product took a split decision from Johny Hendricks in the UFC 181 headliner on Saturday at the Mandalay Bay Events Center in Las Vegas. Two of the three cageside judges -- Marcos Rosales and Glenn Trowbridge -- ruled in Lawler’s favor by 48-47 and 49-46 scores; a third, Sal D'Amato, cast a dissenting 48-47 nod for Hendricks.

A little less than nine months after their unforgettable encounter at UFC 171 -- Hendricks walked away with a unanimous verdict -- in Dallas, the two high-caliber welterweights engaged in another back-and-forth battle for 25 minutes. Lawler (25-10, 10-4 UFC) stormed out of the gate with stunning aggression, tearing into the incumbent champion with repeated knees to the body. Hendricks (16-3, 11-3 UFC) survived the initial onslaught, carried the fight into the second round and found his groove. The Oklahoman smashed Lawler with two-, three and sometimes four-punch combinations, often punctuating them with heavy leg kicks. Lawler seemed frozen at times, but he never went away.

Late in the fourth round, Hendricks jumped on a single-leg and held on for too long, eating punches and elbows in a crouched position. The sequence seemed to turn the tide. Lawler shut down the “Bigg Rigg” again in the fifth and forced him into the same position of vulnerability, punishing his head with hammerfists and his body with digging elbows. Hendricks returned to his feet, only to be met by a blitzkrieg of winging punches from Lawler, the challenger clearly the fresher and hungrier of the two.

Lawler, who became American Top Team’s first UFC champion, has gone 6-1 since returning to the Octagon in February 2013.


In the co-main event, Anthony Pettis submitted Gilbert Melendez with a second-round guillotine choke to retain the UFC lightweight championship. Melendez (22-4, 1-2 UFC), a former Strikeforce and World Extreme Cagefighting titleholder who had never before been finished, asked out of the match 1:53 into round two.

Melendez enjoyed early success with repeated clinches, close-quarters punching exchanges and takedowns. Pettis (18-2, 5-1 UFC) did not flinch and responded to the adversity in spectacular fashion. The gifted champion cracked Melendez with a short right hook in the second round and slowly started to establish his foothold in the match. Later, he countered a takedown attempted by snatching and sitting down on the guillotine. Pettis then rolled into a mounted position, forcing the tapout from “El Nino.”

The 27-year-old Pettis has won his last five fights, four of them finishes.


Travis Browne put away “The Ultimate Fighter” Season 10 finalist Brendan Schaub with first-round ground-and-pound from the back mount in their heavyweight tussle. Browne (17-2-1, 8-2-1 UFC) finished it 4:50 into round one, as he notched his fourth win in five appearances and rebounded from his April 19 defeat to current interim champion Fabricio Werdum.

Schaub (10-5, 6-5 UFC) executed a pair of takedowns but failed to corral the Hawaiian on the canvas. A counter right uppercut from Browne marked the beginning of the end for the Reign MMA export. Schaub fell to the mat in a dazed state, and “Hapa” pounced. Browne advanced to mount three different times before settling on the back and flattening out Schaub. Unanswered lefts and rights forced the stoppage soon after.


American Top Team’s Todd Duffee wiped out former Maximum Fighting Championship titleholder Anthony Hamilton with a searing right hand to the temple and follow-up punches on the ground in the first round of their featured heavyweight showdown. Hamilton (13-4, 1-2 UFC) succumbed to the blows 33 seconds into round one.

The two heavyweights came out firing. Duffee (9-2, 3-1 UFC) -- who had not fought since December 2012 -- folded the Jackson-Wink MMA rep with a crushing right, followed him to the mat and knocked him unconscious with a pair of devastating ground strikes.

Ferguson (17-3, 7-1 UFC) walked through heavy fire, especially early. Trujillo sat him down with a clubbing right hand in the first round and scored with multiple takedowns. However, the Blackzilian’s representative’s gas tank betrayed him, and his pace slowed to a crawl near the end of the first five minutes. In the second round, Ferguson chipped away with constant pressure. A takedown followed by some ground-and-pound opened up Trujillo for the choke. Ferguson cinched it and put his fourth consecutive victory in the books.

The result was not without controversy. An unintentional eye poke -- referee Mario Yamasaki missed the foul -- from “The California Kid” crippled Rivera and had him shying away from contact. Faber swarmed with punches and locked in a no-hooks rear-naked choke for the tapout. The choke erased some stellar work from Rivera, a heavy underdog who frustrated Faber (32-7, 8-3 UFC) throughout the first round with stinging right hands, thudding leg kicks and airtight takedown defense.

Gordon (7-2, 1-1 UFC) stifled the Floridian with takedowns and a suffocating top game in the first round. The Serra-Longo Fight Team standout tried to follow a similar path in the second, where he grounded Samman briefly. However, the 26-year-old returned to an upright position and fired a beautiful high kick that hit the mark. Shin struck face with a sickening thud, and an unconscious Gordon fell backward, his stiff body bouncing off the mat.


A rapidly improving Corey Anderson remained undefeated, as “The Ultimate Fighter” Season 19 winner claimed a unanimous decision over onetime King of the Cage champion Justin Jones in an undercard duel at 205 pounds. All three judges ruled in favor of Anderson (5-0, 2-0 UFC): 30-27, 30-27 and 30-26.

Jones (3-1, 0-1 UFC), who typically competes as a middleweight, handled himself well as a short-notice replacement for the injured Jonathan Wilson. His power punching combinations and stinging leg kicks were the backbone of his game plan. However, Anderson struck for repeated takedowns and leaned on a damaging clinch -- punches and knees flew and landed with regularity -- in slowly wearing down the newcomer. The 25-year-old grounded Jones on three different occasions in the third round, and while the finish he desired did not materialize, the verdict was never in doubt.


“The Ultimate Fighter” Season 18 graduate Raquel Pennington rendered Ashlee Evans-Smith unconscious with a first-round bulldog choke in a preliminary women’s bantamweight battle. Pennington (5-4, 2-1 UFC) finished it 4:59 into round one.

A replacement for the injured Holly Holm, Evans-Smith (3-1, 0-1 UFC) controlled much of the match. She executed a takedown a little more than a minute into the first round, grinded on “Rocky” in the clinch and opened a vertical cut on Pennington’s forehead with a close-quarters knee strike. Late in the round, Pennington delivered a takedown of her own and caught the bulldog choke as Evans-Smith attempted to return to her feet. The former Championship Fighting Alliance titleholder refused to tap and went limp soon after.


A multi-pronged standup attack, strong takedown defense and an active, upkick-laden guard carried Roufusport’s Sergio Pettis to a unanimous verdict over Matt Hobar in a preliminary bantamweight clash. Pettis (12-1, 3-1 UFC), the 21-year-old younger brother of the UFC lightweight champion, swept the scorecards with 29-28, 29-28 and 30-27 marks.

Pettis weathered a first-round knockdown -- it was the result of a left hook from Hobar -- and turned on the jets. The Milwaukee native had Hobar (9-3, 1-2 UFC) ducking for cover in the second, where he dazed him with a head kick and went to work with a volley of clean, accurate punches. The pace slowed in round three, but Pettis remained the more efficient and effective of the two bantamweights, bringing a punishing jab into play.


Pit Elevated representative Clay Collard won for the fourth time in five appearances, as he took a unanimous decision from Alex White in their undercard scrap at 145 pounds. All three cageside judges scored it 29-28 for Collard (14-5, 1-1 UFC).

White (10-2, 1-2 UFC) had his moments: He flurried on the former Showdown Fights champion in close quarters inside round one, bloodied his nose and struck for a late takedown. However, Collard was the more consistent fighter, as he zeroed in on the head, body and legs throughout the 15-minute encounter. The 21-year-old delivered takedowns in the first and third rounds and staggered White with a left hook and threatened him with a triangle choke in the second.