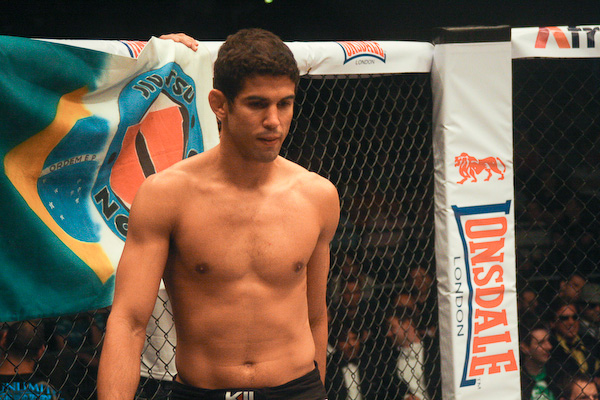 The final bout for the second season of “The Ultimate Fighter: Brazil” is set, as welterweights Leonardo Santos and William Macario will square off at UFC on Fuel TV 10.

The UFC officially announced the pairing on Sunday evening. UFC on Fuel TV 10 takes at the Paulo Sarasate Gymnasium in Fortaleza, Brazil on Saturday night and is headlined by a heavyweight clash pitting Fabricio Werdum against Antonio Rodrigo Nogueira.

Anchored at Nova Uniao, Santos carries a five-fight winning streak into his meeting with Macario. A Brazilian jiu-jitsu black belt, Santos made his professional debut in 2002, losing a majority decision to Takanori Gomi at a Shooto event. The 33-year-old Rio de Janeiro native, who is the brother of WEC veteran Wagnney Fabiano, beat Pedro Irie and Thiago Santos before falling to Santiago Ponzinibbio in the semifinals. However, Ponzinibbio broke his hand, clearing Santos' path to the finals.

Macario, 21, is unbeaten in six professional appearances, finishing five of his opponents by technical knockout and one by submission. Only one of Macario’s fights has gone past the first round. “Patalino” defeated Thiago Santos, Tiago Alves and Viscardi Andrade to earn his spot in the finals of the reality show.