SAITAMA, Japan -- As the MMA year drew to a close, Hiroyuki Takaya bested Bibiano Fernandes to win the Dream featherweight title, capping off K-1’s "Dynamite! Power of Courage 2010" before 26,729 spectators on Friday in the hallowed halls of the Saitama Super Arena.

A rematch of the Dream featherweight grand prix final in October 2009, in which Fernandes bested Takaya via close split decision, this bout was largely even in the opening 15 minutes, as neither man racked up significant offense on the feet. Takaya pawed with jabs and the occasional right hand but was perpetually out of range to land clean shots, instead scoring with low kicks. Fernandes went similarly without offense.

However, as a Dream championship fight -- featuring a ten-minute opening round, followed by two five-minute periods -- Takaya found his rhythm at the 17-minute mark. After a rebuffed takedown attempt, Fernandes pulled guard in an attempt to work his ground game against the challenger. It proved to be an unwise decision, however, as it gave Takaya the chance to mash the Brazilian from on top with punches, sealing the fight for "The Streetfight Bancho." 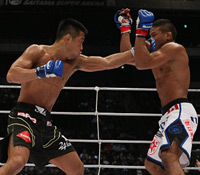 T. Irei
Takaya (left) bested Fernandes.
"I don’t know how to explain it. I think jiu-jitsu is just part of my instincts. This is something that can happen in a fighter’s life. I’ve only fought nine MMA fights; I’m still young. I think I learned something from this fight," reflected a wry-smiling Fernandes after the bout.

Fernandes worked from bottom alternately to control Takaya’s wrists or punch from bottom on his own, but it proved ineffective, as the final-round salvo from Takaya was enough to convince judges Matt Hume, Hikaru Adachi and Kaoru Todori to award him the belt.

Watching from the sidelines was Takaya’s father, who left Chiba for northern Hokkaido during Takaya’s wild youth in order to escape his son’s criminal reputation
as a motorcycle gangster. The elder Takaya smiled
as his son was announced the winner, the Saitama
crowd’s cheers drowning out the house microphone.

"Martial arts changed my life. I want to give back to the martial arts with my contribution tonight," said the new champion.

Dream event producer Keiichi Sasahara previously stated that Dream would split its 139-pound division into 135- and 145-pound divisions in the New Year and give the champion the choice of which division he wanted to reign in. After the bout, Takaya cast his vote for featherweight.

"I think that 65 kilograms is my best weight since now that I’ve fought at 63 today, I don’t really feel powerful at 63," he said. 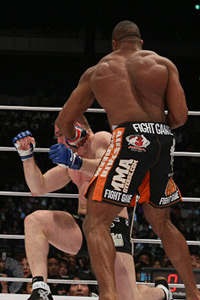 However, entering the bout on less than two weeks’ notice, Duffee looked like a fish out of water against "The Demolition Man" from the opening bell. Deftly ducking under Duffee’s opening barrage, Overeem avoided damage early before turning on Duffee with knees to the belly. After a particularly gruesome knee to the body froze Duffee in his tracks, Overeem landed a monstrous pair of hooks flush to the face. The punches instantly turned out Duffee’s lights, as his body collapsed to a sitting position before sagging out of the ring, prompting referee Moritaka Oshiro into action.

Post-fight, Overeem stayed true to his desired role as the people’s champ, offering the crowd a greeting in Japanese -- and a promise.

"Genki desu ka? (How are you doing?)" Overeem asked the crowd. "This year, I won three world titles -- Strikeforce, then K-1, and now Dream -- and I promise you all that I’m going to keep giving you great fights! Arigato gozaimasu!"

MMA onlookers complain that 41-year-old MMA icon Kazushi Sakuraba is falling apart in the ring. In his Dream welterweight title bout with champion Marius Zaromskis, it nearly happened -- literally. In his welterweight debut, Sakuraba chose to stand and trade with the dangerous Lithuanian fighter. While largely unable to land his punches, Sakuraba kept his guard high and protected his chin well. He was not able to protect his epically cauliflowered ears, however, as a Zaromskis punch badly marred his right ear. The bloody injury forced a doctor stoppage at just 2:16 of the first round, after Sakuraba’s ear had partially detached from his head.

"Sorry, but my ear kind of came off, dammit," the ever-comic Sakuraba said after the bout. "Zaromskis is a great fighter. Thanks for coming out to support me. I think I’m still improving, so I want to continue fighting."

After going winless in his last three bouts, with knockout losses to Strikeforce champion Nick Diaz and Evangelista "Cyborg" Santos, the victory was Zaromskis’ first since his 19-second starching of South Korean Myung Ho Bae in October 2009. 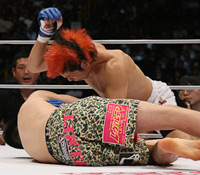 T. Irei
"Jienotsu" knocked Shinya Aoki cold.
The commingling of K-1 and MMA fighters and rules is a staple of "Dynamite!" on New Year’s Eve, and 2010 was no different. However, there was a level of shock and surprise, as cosplaying kickboxer Yuichiro "Jienotsu" Nagashima shocked Japanese star Shinya Aoki, knocking out the Dream lightweight champion in the second round of their mixed rules bout.

Aoki took advantage of the fact that he only had to survive through a single three-minute round of kickboxing and thus threw pointless attacks like flying dropkicks and rolling heel kicks while holding onto the ring ropes. Most onlookers tabbed the dynamic grappler Aoki to win by default if it reached the second round, which would be contested under MMA rules, though Nagashima did have menial MMA
experience heading into the bout. Regardless,
"Jienotsu" had other plans.

As the second-round bell rang, Aoki dropped immediately for a double-leg takedown, while Nagashima launched a flying knee square into Aoki’s jaw. The blow instantly put the Dream champ to sleep, after which "Jienotsu" followed up with a bevy of hammerfists on the supine Aoki. Shimada stepped in for the save a scant four seconds into the period.

After the fight, Nagashima took to the microphone, voicing a sentiment that his K-1 contemporaries have longed to express, given MMA fighters’ recent antagonism of the K-1 ranks.

"K-1 is strong, isn’t it?" said a smiling Nagashima to wide applause.

Continuing his recent tendency to fight safer, Ishii rarely engaged Le Banner on the feet, instead opting to take the fight to the floor, plodding with punches. As a fighter that has otherwise demonstrated zero finishing power, Ishii’s punches only served to tire out the muscular Le Banner. Ideally, Ishii would have been able to put away the gassed Frenchman with his Achilles lock and kimura attempts, but his punches apparently sapped his own strength, as well.

Le Banner landed brief flurries of punches when gaining compromising positions in the scramble, forcing the Saitama crowd into chanting and cheering. However, "Geronimo" had too little in the gas tank and too little defensive wrestling to capitalize for any length of time.

Judges Gen Isono, Masanori Ohashi and Yasushi Miyake all scored the bout for Ishii. Despite Ishii being the deserved winner, the decision was met with a wide chorus of boos, indicating that Ishii has perhaps overstayed his kakutogi welcome. Ishii, hailed as a savior for Japan’s flagging MMA scene after his Beijing Games gold medal, was also heckled and booed from the ring in November after defeating Katsuyori Shibata. 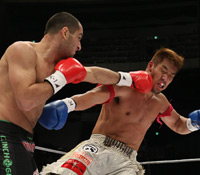 Two years ago, Mousasi bested K-1 vet Musashi via first-round knockout under K-1 rules on New Year’s Eve. His bout with Fujimoto was more competitive, as both men traded sharp crosses and hard low kicks. However, after a 10-10 opening stanza, the second round was the difference maker, as Mousasi crushed a surprisingly aggressive Fujimoto with a left hook and put him on the canvas. Mousasi’s dominant round earned him a 10-8 frame, which made all the difference as the final scores came in 30-28, 29-28 and 29-28, all for the Dutch-based Armenian.

From the opening bell, Kawajiri was fundamental and dominant, muscling the American to the canvas and locking up the mount to work ground-and-pound. The second frame saw Kawajiri also secure a tight arm-triangle choke early, but he was not able to finish. Thomson saw his best moment at the end of the round, finishing on Kawajiri's back. However, the "Crusher" took control of the third frame, mashing with punches and ending with another arm-triangle attempt.

All three judges -- Matt Hume, Masanori Ohashi and Hikaru Adachi -- awarded Kawajiri the win and, by extension, a potential plane ticket to the States, where he has expressed a desire to compete in the cage. 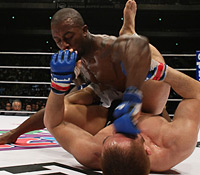 Otherwise unable to connect on the feet, High stole the fight by putting "Mach" on his back, where he kept busy with punches. The successful one on the feet was Sakurai, however. In the last round, he landed a big right hand to rock the American. Luckily for High, his wrestling instincts kicked in, and he took down Sakurai to regain control of the bout.

Sakuari’s last-minute offense swayed judge Akira Shoji to award him the bout. However, judges Gen Isono and Yasushi Miyake trusted in High’s overall control, giving him the nod and the split decision victory.

Uno looked sharp early, slickly outboxing Miyata with jabs and hard left crosses. However, Miyata got his game together in the second round, scoring with crushing inside low kicks and displaying his potent wrestling. The 2000 Olympic Games freestyle wrestler ragdolled Uno from the clinch and scored with three of his trademark, high-amplitude German suplexes.

Ten minutes of heavy kicks and wrestling dominance earned Miyata the unanimous decision. The win was the sixth straight for the 34-year-old Olympian, who has just hit his stride as an MMA fighter after an early career marked by overly expectant matchmaking. 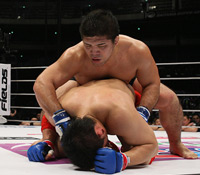 T. Irei
Judo silver medalist Hiroshi Izumi
pounded out veteran Ikuhisa Minowa.
Another Olympic star, 2004 Athens Games judo silver medalist Hiroshi Izumi, pounded out popular Japanese fixture Ikuhisa Minowa. After a slow, cautious start, Izumi got repeated takedowns and bashed "Minowaman" with punches and hammerfists as he tried in vain to look for a leglock. By the third round, Izumi’s strength and wrestling took their toll on Minowa, who was defenseless under his barrage of punches, forcing Yuji Shimada to halt the bout at 2:50 of the third round.

Japanese MMA’s "Cinderella Boy" Hideo Tokoro submitted boxing bad boy-turned-K-1 agitator Kazuhisa Watanabe in the third round. Watanabe survived on the ground surprisingly long against a plethora of submission attempts, taunting Tokoro all the way. Finally, Tokoro locked up a fight-ending
nearside armbar from side control at 2:50 of the final frame.

Russian slugger Sergei Kharitonov needed only 85 seconds to smash Japanese heavyweight Tatsuya Mizuno. Kharitonov smacked Mizuno with right hands, punctuated by a massive knee that put him down and out, forcing Yuji Shimada to jump in for the save.