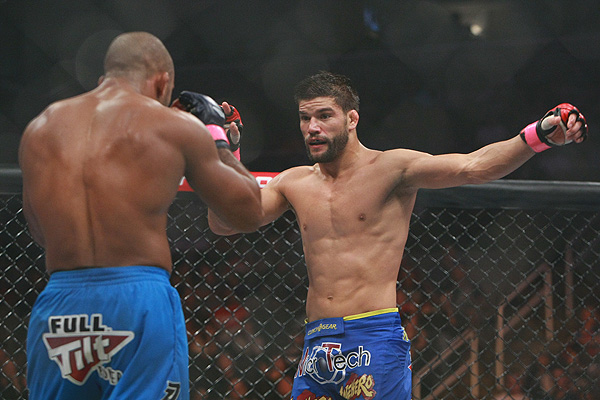 Additionally, a pair of light heavyweight matchups have been green-lit for the Sept. 29 show, as Mike Kyle meets Dion Staring while Carlos Augusto “Guto Inocente” Filho faces Gian Villante. The Showtime-broadcast event takes place at the Power Balance Pavilion in Sacramento, Calif., and is headlined by a titular lightweight title collision between Gilbert Melendez and Pat Healy.

Thomson, 33, was last seen taking Melendez the distance in their May 19 rubber match, falling by split decision to “El Nino” at the HP Pavilion in San Jose, Calif. The narrow defeat followed a March 3 victory for “The Punk,” as the American Kickboxing Academy standout topped K.J. Noons via unanimous decision.

Fodor, meanwhile, suffered just the second loss of his pro career in his most recent outing, submitting to a third-round arm-triangle choke courtesy of Healy on March 3. Prior to that setback, “The Future” had won five straight fights, topping David Douglas, James Terry and Justin Wilcox in 2011.

Santiago, 31, makes his welterweight debut on the heels of back-to-back wins. “The Sandman” last competed under the Strikeforce banner in November 2007, when he won the promotion’s single-night, four-man grand prix. Santiago would go on to capture the Sengoku middleweight title before returning to the UFC for an ill-fated two-fight stint last year.

A former King of the Cage welterweight titlist, Mulhern, 27, earned victories over Danny Davis Jr. and David Hulett to end 2011 before upsetting highly regarded prospect Yuri Villefort this past May, taking a split decision from the previously unbeaten Floridian at “Barnett vs. Cormier.”

Kyle, 32, last competed on May 19, when Rafael Cavalcante appeared to avenge his 2009 loss to Kyle by submitting the Californian in just 33 seconds. However, the result of that bout was later changed to a no-contest by the California State Athletic Commission after Cavalcante tested positive for a banned substance.

Staring, 34, is a 35-fight veteran and makes his Strikeforce debut riding a six-fight winning streak. The Dutchman has stopped nearly 80 percent of his conquered foes by either knockout or submission over the course of his 13 years as a pro, most recently finishing John de Wilde in just 83 seconds on April 9.

Better known as “Guto Inocente,” Filho, 26, has yet to taste defeat as a professional. The Brazilian battered Virgil Zwicker in his most recent in-cage appearance but could not finish the durable “Rezdog.” Nevertheless, Filho was victorious in his Strikeforce debut, taking a unanimous decision from Zwicker on May 19.

Formerly a heavyweight prospect, Villante made the cut to 205 pounds after a loss to Chad Griggs last year. Though the 27-year-old stumbled in his light heavyweight debut against Lorenz Larkin, he has since righted his ship, besting Keith Berry, Trevor Smith and Derrick Mehmen in his last three bouts.